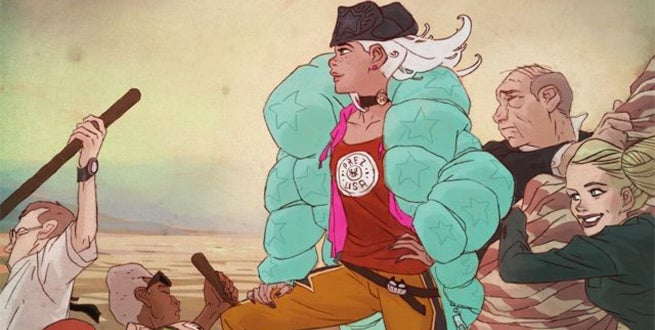 The year is 2036. In a desperate attempt to improve voter turnout, the US government lowers the electable age for a presidential candidate, and changes the vote to a strictly general election--on Twitter. A young girl with a corndog accident goes viral during the election and becomes the next President of the United States of America.

This is the wacky world of Prez, a concept DC Comics is reviving with a completely new approach from Mark Russell and Ben Caldwell. While the original version was a campy look at American politics, Russell hopes the new edition, which plans to run as a monthly series for one year, will make people view a silly concept through a serious lens. Through his fantastic point-of-view, Russel wants to tackle real problems and issues.

For more on Prez, we talked with Russell about the influence he hopes his series will have on readers. We also have the full, free DC Sneak Peek: Prez 8-page story embedded below. Prez #1 hits comic shops on June 17.

Mark, I have to tell you, I never thought I would be terrified of a teenage girl who was elected president via Twitter...until I read that last line.

Mark Russell: (laughs) What was the last line, that terrified you?

When she had just brutally murdered people using some kids playing video games, and called it "research!"

MR: (laughs) Yeah, the UN Conference is there to hear arguments about using these automated troops in conflict zones, so I thought it was a unique opportunity for the President to see it first-hand as the people who are being hunted by these forces. It gives her the point of view of someone living in terror of a drone attack. So that's what I meant by her doing research – she's the first President in history who knows what it's like to be on the wrong end of American Military intervention.

So, the original series featured a character nicknamed "Prez" and this one features Beth Ross, obviously evocative of Betsy Ross – was it mandated that you use a pun name for your main character (laughs)?

MR: No! That was just what I came up with.

And actually, the original Prez, Prez Rickard is in this story. I had to change his name to Preston because I didn't want there to be confusion between him and Beth, and I didn't want to title "Prez" to refer to him as opposed to her.

While this volume does have ties to the original, the original Prez was, let's call it "campy." It seems from the DC Sneak peek that's not what you're going for here…

MR: No, this one is more darkly satirical. I'm not really going for camp or kitsch value at all. Plus, I think the original one was kind of guided by misgivings about youth culture. It was done in the Vietnam era, when 18 year-olds were just given the right to vote, and it was fueled by this paranoia of, "now that we've allowed the hippies to vote, what are they going to do to this country?

It never really panned out that way – 18 year-olds have had the vote for 40 years now and they never took over the way the original Prez foresaw. So my Prez is much more about how the country has declined because the youth revolution never happened. Now, there's finally somebody who is completely outside of politics, completely uninformed in the mistakes of the past, who gets the chance to try something new for once.

That's an interesting approach to taking a silly idea and giving it a more serious look.

MR: Yeah! And I do try to be funny, I hope the book is funny. But to me, the important thing is not so much that she is a teenager as it is that she's an outsider; she's someone who's not within the political establishment, so she can finally do the things that should be done. She doesn't have to please people, or pay back favors or donors; she doesn't have the baggage that most elected politicians would have.

You mentioned that the original Prez was looking at the political climate of giving teens a vote. As a high concept, what made you want to explore this now, in 2015?

MR: In a lot of ways, I think the vision and the idea of where American politics was going 40 years ago turned out to be completely wrong. We did not sort of ride the counterculture into this aquarian utopia. We are now, in many ways, a much more profoundly conservative country, a much more fear-governed country than the hopeful days that the original Prez kind of existed in. So I want this to be a commentary on that. I set it 20 years in the future more so I could comment on what the country is like now, so I could see where, if we continue this trend, what sort of things and ridiculous hyperbole that could lead to in the future.

I want this to be hand-in-hand, working as a dystopian science fiction, and also as a dark political satire.

What is it about the teenage perspective that allows for such a different take on the world of politics?

MR: I think the most important thing is that they wouldn't just rely on the same answers that every generation before them had come up with. They wouldn't think that military force was the solution to every international problem. They wouldn't think that every economic solution needs to come through large corporate infrastructure. They wouldn't think that – they'd think outside the box in terms of making alliances or who they'd put in their cabinet; they wouldn't just have their Army buddies or people that they'd served in the Senate with for fifty years in their cabinet – they'd have actual smart people! They might have people they admire like writers and scientists and thinkers in their cabinet, and I think that would make a huge difference in American politics, if we actually didn't have politicians in our cabinet, but allowed the executive branch to be staffed by people who knew what they were doing (laughs). A Secretary of Transportation who had actually ridden a bus at some point might be a good thing! (laughs).

When you're looking at a future and skirting this idea of a dystopian sci-fi, when you're building a world where Congress would reduce the presidential age and agree to a public vote via twitter – what are the things you're thinking about in that world?

MR: I think one of the things that drove the concept of the twitter vote was not just that social media is invading every facet of our lives – some ways for better, some ways for worse – but also because voter turnout seems to be really low in most elections. So I thought this would be the perfect way to address both. Everyone is already on social media and using it for everything, so this makes it easier and more accessible for people to vote.

Of course, the downfall of that idea, is that the nature of twitter is always flexible and temporary. So if you have someone getting viral at just the right moment, they could really throw off the election, if people just started a write-in campaign for the "Alex from Target" or whoever the person of the moment was. That's kind of how this begets the story: Beth becomes viral because of a corndog making accident at her place of employment, and she becomes viral at just the right point to throw the election off into a run-off election.

What do you hope readers will think about, what questions do you want them to asking themselves, when they come away from Prez?

Is that the kind of thing you're asking yourself when you're writing it?

MR: That's the kind of thing I research when I'm writing it. I think the other important thing I want people to ask themselves is just what they would do if they were Prez. What would they do in these sorts of social issues that she's dealing with?

Prez (Beth) has the advantage of not being tied to any political party, she doesn't have to make donors happy, so she can come up with any solution that she wants, and she has her cabinet made up of non-politicians to help her think outside the box. So I think that's what I want people to do when they're reading this, is to think of solutions that haven't been tried before in politics… or maybe aren't even political solutions!

Very cool. The President of the United States doesn't necessarily need just one antagonist, but what can you tell us about the antagonists or the challenges that Beth will be facing?

MR: The antagonist with the most panel time would be Senator Thorn. He's the leader of the powerful block of Senators known as the Colonels, and he's always trying to foil her initiatives. He's very smooth-talking and funny.

But the big villain, the big bad in this series, as it was in the original, is Boss Smiley. But in my world, there's a corporate privacy amendment that allows corporations to no longer disclose who their chief officers are. So the CEOs of major corporations don't go by their real names – they wear a mask with their corporation's logo on it, and go by "Boss ____ Name of whatever the corporation is." So Boss Smiley is the CEO of the Smiley Corporation in this world. Whenever he's meeting with the bosses of the other corporations, they're all wearing masks bearing the logos of their respective corporations.