This September, DC Comics will publish 41 stand-alone issues tying into The New 52: Futures End. In each of the one-shots, creators will put DC characters through a prospective five-year time jump that will give a sense for where the heroes might stand in that time. The world of Futures End is already starting to fall apart at its seams in five years, so it's distinctly possible that most of these stories will be pretty dire -- and as it is whenever time travel is involved, there can be some pretty big, surprising and even wacky ideas at play. The list of titles and creators released today, along with the covers released for Week 1 and Week 2 titles of the crossover, have given us a fair amount of information to work with, though, and we wanted to run down some of our thoughts. 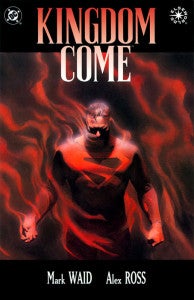 While the Superman cover long used to promote this event shows the Man of Steel partially integrated with robot parts (a visual echoed in the Futures End Free Comic Book Day title, now available on ComiXology, Kindle and Nook), the Action Comics cover released today shows him in a city on fire -- but seemingly either covered in, or made of, sand. My first instinct was to think this cover is a nod to Kingdom Come #4, but regular reader and commenter Michael Sacal suggested that it might actually be a nod to "The Sandman Saga," one of the first Bronze Age Superman stories. Published in 1971 and often reprinted under the title Kryptonite Nevermore, the story saw Superman's powers siphoned off by a "sandman" (not, as far as I remember, related to either the JSA's or Vertigo's Sandman characters) who took Superman's form. The story didn't really take at the time, although the powered-down Superman, the more human problems, the less-goofy Clark Kent and other elements of "The Sandman Saga" later resurfaced as elements of the John Byrne reboot The Man of Steel after Crisis on Infinite Earths. Walter Simonson drew a version of the story in Superman Special in 1992. Dan Jurgens, who will write Superman: Futures End #1, was one of the writers on the Superman titles in the '90s, when they reworked the Silver Age camp classic "The Amazing Story of Superman-Red and Superman-Blue!" into a months-long "event" story that temporarily gave Superman a new look and new powers. Lots of people are right at home While there's a strong feeling that the Futures End miniseries writers are steering this ship (we haven't seen Dan Jurgens writing this many books in one month since Zero Hour and Jeff Lemire since...well, actually, Jeff Lemire pretty much always has a thousand books on his plate but you get the idea), there are a not-insignificant number of titles that are going to be written by their regular, monthly writers or by writers who have worked with the characters in the recent past. Dan Jurgens will write Booster Gold and Superman for instance, two characters to whom he is very closely tied. Jurgens and Norm Rapmund will provide a cover for Booster Gold, as well, marking the first time they've drawn the character together since the New 52 relaunch. Jurgens created Booster Gold more than 25 years ago and worked on nearly every issue of the character's series that ended at #47 when The New 52 reset the universe. Jurgens will also write Aquaman and Aquaman and the Others, which fits since he's writing Aquaman and the Others monthly, the first title to officially tie in to Futures End. Related: Dan Jurgens Talks Aquaman & The Others, Futures End Critics In fact, nearly every Futures End tie-in issue is written by the series' regular writer, or someone who has extensive experience with that character. The ones that aren't seem to be primarily written by Ray Fawkes, who seemingly is helping to guide this crossover in a big way. Fawkes also co-writes the Batman issue with Scott Snyder. Perhaps most notable is Charles Soule writing Wonder Woman. While he regularly writes Superman/Wonder Woman, the primary Wonder Woman title has been written up to this point by Brian Azzarello, who despite being one of the writers on the weekly is nowhere to be seen on this list and who recently suggested that he may leave Wonder Woman altoghether because he's close to wrapping up the story that he came on board to tell at the start of the New 52. 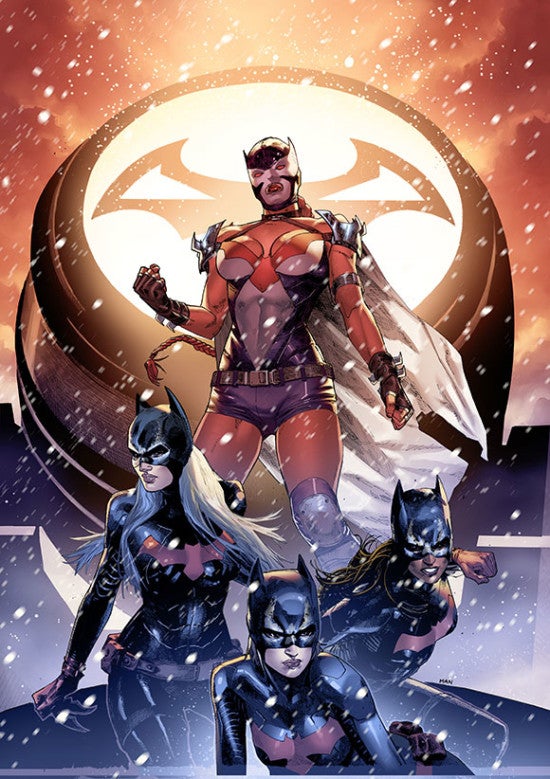 Batgirl Arguably the most intriguing cover of the batch so far is the Batgirl cover, which features what looks like Batgirl, Inc. While Batman assembles an army of what looks to be either robots, clones or just people who look enough like him that they seem to be Photoshopped in rather than drawn one by one, Batgirl's group is a very different thing. The Bane-inspired design is bizarre, and being that she's the primary focus of the Five Years Later cover means there's been a lot of chatter around that online. Some commenters have suggested that Bane's Venom drug might help Barbara Gordon keep her back from deteriorating, which is probably the most logical explanation for the look I've seen yet, but it's far from a given. Stephanie Brown seems to be featured as Batgirl on this cover, marking the first time since the launch of the New 52 that has happened...and who's that Batgirl front and center with the short, dark hair? Could it be Cassandra Cain?! There's also a chance that the Banegirl at top might be Kate Kane, making Bette Kane a more likely candidate to be the blonde.

Green Arrow Well, in the first issue of The New 52: Futures End, Green Arrow died while rescuing people from a fire. Because Firestorm was called to assist but one of the two college kids who have to merge to form the hero dragged his feet, that character seems to be taking the fall for it. Well, it looks like Green Arrow is either less dead than advertised, or in five years there will be a new Green Arrow who can take over for Oliver Queen. Interesting...

Aquaman Apparently spending so much time topside hasn't done him much good with the Atlantean people. Not only is he kneeling before the authority of Mera, who sits on Atlantis's throne with Aquaman's trident, but he's in manacles as well. The next question, then, is just how he fits into the Aquaman and the Others issue, since the whole premise of that team is that they share those golden Atlantean artifacts. Jurgens wrote both of those, though, so it's likely the two will play off each other fairly closely.

Grayson Dick Grayson's changes might be the oddest. After faking his death at the end of Forever Evil, he takes on the identity of simply "Grayson" in an upcoming super-spy book. While that's a controversial change, it's one that can probably be made to work without too many unbelievable contortions in his character and motivations. Here, though, we see that he's taken on the role of the Soviet superhero Red Star. Also, the Soviet Union's hammer and sickle is back in effect? Don't be surprised if this issue has a bit of hamfisted political preaching, connected either to writer Tom King's background in espionage and diplomacy or just a general comfort level with making Russia the Evil Empire again since Vladmir Putin doesn't have any fans in the Western Hemisphere.

Green Lantern We get Hal Jordan stuck on the Source Wall, which is odd since Kyle Rayner can navigate it...so what would motivate Hal to attempt and fail to do so by himself? This also probably plays into the bigger picture since Darkseid's invasion of Earth 2 seems to be a major factor in the publisher's plans going forward. The Source Wall's connection to the New Gods is something that hasn't really been explored in any kind of depth since it popped back up in the New 52 as a plot point in the Relic storyline. 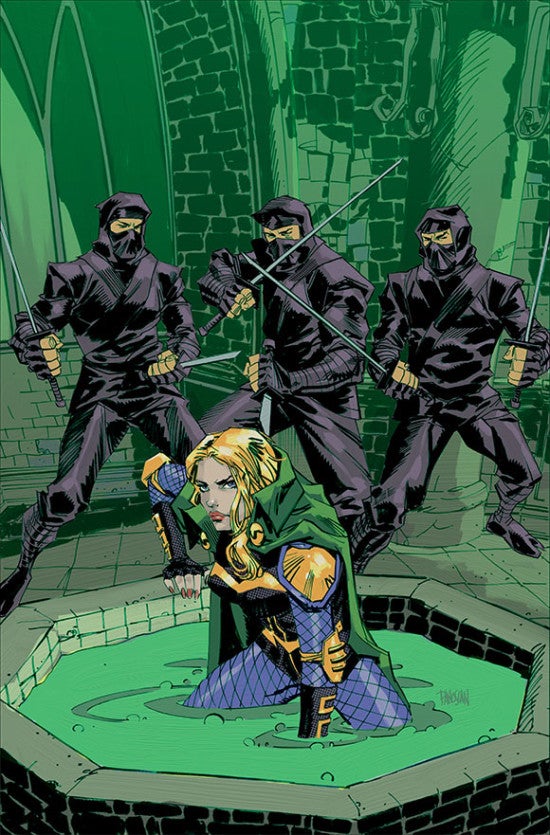 In general We do have some more kind of generic reveals that could prove to be cool issues, but tell us very little. The Phantom Stranger is back to being Judas Iscariot in his 3D cover, while Swamp Thing becomes some kind of bizarre mechanized version of himself (is this Brother Eye-related?). There's a new logo behind Batwing -- is that a future version so WayneTech's logo? Or something else entirely? I can't tell. If this is something really obvious, like a logo used in Batman Beyond that I've forgotten, please forgive me. The female Red Tornado that we've seen being operated on in solicitation materials for July's Futures End books is featured, operational and in flight, on the cover of Earth 2. We get a lot of other changes: an unidentified black woman replaces Power Girl on the cover of Worlds' Finest (wait, though, is that a Mr. Terrific outfit? Could this be one of his entourage? John Constantine wears a Dr. Fate helmet, while John Stewart joins up with the Indigo Tribe. Justice League United lose most of the lineup but gain Dawnstar from the Legion of Super-Heroes, and Amanda Waller has taken the White House.

DC Comics's Futures End September Event: What Do We Know?