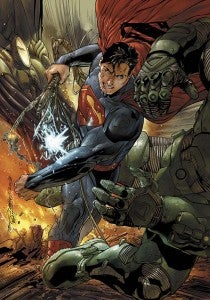 If the first round of solicitations and a week of persistent rumors are anything to go by, all of DC Comics's New 52-branded superhero titles will get gatefold covers in April.

So far, only the Justice League and Superman groups have been solicited, but all of the solicited comics feature a gatefold cover and many of them feature a variant MAD Magazine parody cover (so much for DC's claim that they would cut down on variants in the near future).

One has to wonder whether the MAD covers will be fold-in puzzles. That would be kind of neat.