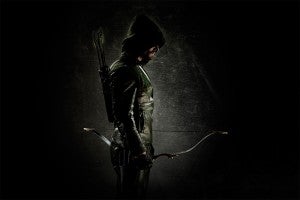 , the upcoming CW Network pilot based on DC Comics' Green Arrow, has its first official image this afternoon, compliments the DC Comics blog. The site reports that the costume, worn by series star Stephen Amell, was designed by Academy Award-winning costumer Colleen Atwood. It's the first image we've seen from the series, the first look at Amell as Oliver Queen and the first live-action look at anyone besides Justin Hartley under Green Arrow's hood in years. "When I directed the pilot for Smallville, I knew that making Clark Kent relatable would be the key to audiences believing in him as a hero," executive producer David Nutter, who is also directing the Arrow pilot, told DC. "Arrow is a different show — darker and harder-edged — but it's the same core idea. We're creating a real, believable world in which Oliver Queen can do incredible things." For the uninitiated, the blog describes Arrow as follows:

"After being marooned for five years on a remote island, former billionaire playboy Oliver Queen returns with a mysterious agenda and a lethal set of new skills that he uses in a war on crime."

In the course of that war on crime, he'll apparently appear to be a bit more like Jason Bourne than Batman, according to a TV Line article that ran prior to production's start two weeks ago. The CW has their eyes on a fall 2012 premiere date for the show.