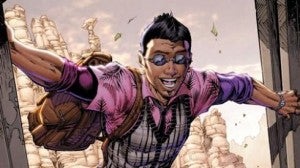 A commenter on an earlier story intrigued me into writing this piece.

When confronted with the question of what constitutes an "iconic" character, and therefore who might be a good choice to be DC's much-discussed newly-gay character, Ingrid Cold asked, "Why do it at all?" Assuming that the question wasn't just bored and cynical, but actually wanted a direct answer, I started to propose a couple of choices in the comments thread--and abruptly stopped myself.

There are a number of reasons that DC might want to do this, and they're not all the same old arguments about why minorities should be represented in comics. It's not a matter of minimizing that discussion, which is one that's worth having; it's a question of addressing this specific story in its proper context.

This particular question wasn't, at its core, about representation; it was about the change being made to the character and their history and the attendant changes that would mean for the characters around them in the event that character turns out to be someone who, in previous iterations, had fathered biological children with a woman through normal relations. Considering some of the choices on the table, that's a realistic concern.

Any number of reasons, really.

Maybe a writer had a good story for it. If a character's sexuality is not a central part of who they are and never really has been, then maybe it's considered malleable in the service of a good story. It's happened before with other traits--like when Rip Hunter's hair went from blonde to brown in order to make it easier to tell him apart from Booster Gold when the pair were standing together out of costume--nobody cared about Rip's hair, so it was an easy change and it made the visual narrative easier to follow. If this change made a character more interesting or his stories more worth following, wouldn't it be worth it for a change that makes little or no difference to the way he's depicted outside of his own solo stories?

Maybe, given that the publicity from the New 52 relaunch and its attendant sales increase have started to cool, DC has decided that just hitting the "reset" button wasn't enough to give people the impression that their stories are suddenly young and hip. A lot of mainstream audiences often think of superhero comics as staid and old-fashioned storytelling, and without a seismic shift to the way they're perceived, comics may be unable to generate sales among readers who aren't already hooked. Targeting a younger audience is essential to the survival of the industry and if that means meeting them on their own terms, the publisher may have decided it's time to do so.

Maybe it's about Obsidian; the character no longer appears to exist in the world of the New 52, but when the character made the jump from straight to gay years ago, there was a small, vocal group of fans who were very upset by it but by and large most people didn't care. At the same time, it gave them a little cache, just having one of the earliest homosexual characters in mainstream comics. This is something that management might easily expect to work to their advantage again, with characters who don't have as devoted a following experiencing changes all across the line to make them more appealing.

Add that to the fact that it's very difficult to generate a new character from scratch and give them the kind of marketing and creative push that's necessary to keep them vibrant (what's the last totally original character DC developed, who lasted? Booster Gold or Lobo? And before you answer, remember that characters like Steel and Manhunter don't count if they're using old names and other characters' indicia).

Would changing a character's sexual orientation make them appeal to a larger group? Probably not, but it could make him hugely popular with a small audience, which is really all that's necessary for a non-first-tier comic book character in today's market. Would such a book (with a rabid fanbase of 15,000 or so) last very long? Of course not--but it would turn a total non-factor like many of the rumored characters into a property that could generate revenue, at least for a little while.

DC's Gay Character: Why Do It At All?