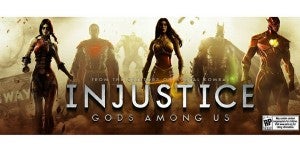 A couple of days ago, gamers and comic book fans alike were given a first glimpse into DC’s new fighting game “Injustice:  Gods Among Us”.  And though I’m not a particular fan of fighting games, I have to admit that the game looks incredible.  The textures of both the characters and the environments are amazing and the fights seem diverse and interesting.  Mixing the best of Mortal Kombat vs. DC and seemingly adding their own new ingredients, it seems to be the next great fighting game.

So far the only characters revealed are Superman, Batman, Wonder Woman, The Flash, Harley Quinn, Solomon Grundy, and maybe Lex Luthor.  But they are far from done revealing new characters.  And that’s what this article is about.  We all have our favorite villains and heroes and until they reveal the true roster, the best we can do is speculate and hope.  For me, these are some of the people I would like to see  and some whom are obvious choices:

And I don’t mean Cassandra Cain and Stephanie Brown.  I mean the original, red-haired, bat-femme-fatale Barbara Gordon.  With the new 52 bringing Barbara out of her wheelchair and back into her favorite suite of clothing, it would be amazing to see her tearing it up alongside DC’s other heroes.  Relying less on brute strength and more on smarts, agility and gadgets, it would be interesting to see what they could do with her.  Sadly, she may be too much like Batman and may have to sit this one out.  But a guy can dream.

Green Lantern:  It would make sense for another heavy hitter hero to be on the roster.  Doesn’t matter which lantern they choose doesn’t matter as the ring is the thing that defines the character.  And with said ring, there’s plenty of things the character can do.  Mostly, creating any weapon they so desire.  Along with being able to create cover and, famously, a giant green fist that can hit or throw, he’d be the perfect offensive character.  There’s probably no doubt he’ll be in but, still, it’ll be awesome to see.

Green Arrow:  Yes, Green Arrow technically doesn’t have superpowers and he does primarily rely on that bow of his but that would be the interesting things about the character.  Too say he has an array of arrows is an understatement  as he has everything from explosive ones to ones with a punching glove on the end.  Though Green Arrow isn’t exactly one of my favorites, it would be kind of cool to see him using a punching glove arrow to punch someone through the wall and rush forward to attack.  But that’s just me.

Cyborg:    As being part of the Justice League, it would be interesting to both see his powers shown and how he fits into the overall story.    With his super strength and speed, along with his Integrated weaponry, he could be both a long distance shooter or an up-close-and-personal brawler.   It might be a slight long shot for him to be in there but for story purposes it could be very interesting.

Hawkman:  Yes, Hawkman.  Not most people’s first choice but a different one at the least.  With his enhanced strength due to Nth Metal and his large array of weapons (i.e. shield, dagger, mace, cestus, battleaxe).  With his wings, his speed and agility will be better than most.  And, like I said before, add on his weapons it will be a joy to throw one into the air and fly after them, before hitting them with another weapon of choice.

Starfire:  Not an obvious choice but a good one.  With her ability to fly, it’s obvious she can take advantage of the vast environment.  But her powers are both different, interesting, and powerful.  Able to absorb solar energy and turn light beams into powerful  destructive beams she could easily overwhelm the most powerful of villains…or heroes if the case may be.  Plus, she’s also an accomplished fighter so you wouldn’t entirely have to rely on her powers.  Plus, her avatar would be great to see on screen.

If there’s going to be a counterpart to Wonder Woman it has to be the Cheetah.  The rivalry of these two is as good as Joker and Batman.  Cheetah has proven herself to be a pure villain, murdering plenty of people in her time.  Besides the usual array of above-average strength, speed, and agility, what she lacks in fighting finesse, she more than makes up for in sheer brutality.  She would most definitely be a brawler and I can only imagine with her teeth and claws for some truly brutal moves.

Bane:  Bane doesn’t have superpowers, per se, but as the man who broke the bat, he would be a worthy adversary to Batman.  I know what most people would say:  “What about the Joker?!” and those people would have a point.  And as much as I love the Joker, I think he has had his time to shine and it’s time for someone else to step up to the plate and there’s no one better than someone who has physically destroyed Batman.  He’s big, his powerful and it would be no problem to beat his opponents with cars or simply punching them straight up, through or down a building.  And his ultimate move of course would have to be…the backbreaker.

Darkseid:  Yes.  This is the most obvious choice of villain for Superman (except for Lex Luthor, of course) but it is a good choice.  No one in the DC universe shows the definition of evil and destruction more than this creature.  And if there’s anyone that can both destroy and possibly turn our heroes dark, it would be him.  With powerful Omega Beams, powerful strength, and nearly indestructible, he would be the perfect ultimate boss.

Artemis:  Though she has no super powers, her ability to fight and nearly defeat Wonder Woman leaves her a foe to worry about.  A master of hand-to-hand combat and a master of both sword and archery, she can easily incorporate those into an interesting fighting style all her own.  Though it’s doubtful to see her there, it would interesting to see a non-super powered female villain running around.

Doctor Polaris:  A classic case of split personality, he possesses the powers of magnetism.  He can levitate, create force fields, generate concussive blasts and basically control and manipulate any metallic object.  His main foe has always been Hal Jordan so if he really is in the game, it would be interesting to see how this character would play out.  He may not be well known but, hey, I like the idea of different characters being put into play for once.

Brimstone:  A creation made by Darkseid, he is a being made up of plasma and, because of that, has incredible strength, can create intense heat and flames (which translates into cool sequences of said flames decimating the other players) and can even create a giant, flaming sword.  Though one of the more obscure choices, I think it would be a good second-to-last-boss fight if they do decided to make Darkseid the true villain .

She is no stranger to this type of genre as she was in the previous Mortal Kombat vs. DC Universe so it would be interesting to see how she would play out in this game.  In the previous, she was a villain, which we all know she doesn’t particularly fit into.  She’s always fit in that world of grey and things are never black and white and that would be a perfectly fitting role in this game.  You can either see her fighting for the heroes, fighting for the villains and, of course, fighting for herself.  Add on her extreme agility and expert fighting style, she would be a full on physical fighter with her trusty whip at her side.

Firestorm:  Definitely not people’s first choice or thought for this game but definitely worth mentioning.  With his power to rearrange the atomic and molecular structures of inorganic material, he can make anything on the map his own personal weapon.  And with his ability to fly, like others, he can easily throw characters around anywhere he would please.  And as a member of a Justice League, he would definitely have ties to the heroes and villains that surround him.  Who knows?  Maybe he’ll make his video game debut here.

Now, I’m sure that I’ve only covered a fraction of what could possibly come from this game and I’ve probably overlooked a lot of your favorite characters.  So what do you think?  Disagree or agree?  If your picks aren’t up here, than who, or what, would you like to see?  Right now, the possibilities are endless but I’ll definitely keep up to date on any new reveals for characters.