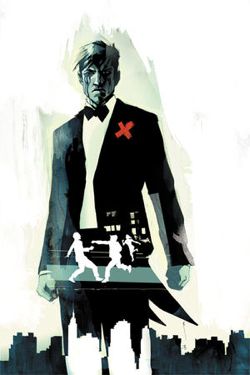 has announced that they will be partnering with 72 Productions to produce a Deadlocke comic book. Deadlocke will be a one-shot comic tied into Christopher Krovatin’s Venomous, which is a Simon & Schuster young adult novel. 72 Productions also has a Deadlocke feature film in the works. 72 Productions is run by Jen Chaiken and Sebastian Dungan Deadlocke is a mixture of real life and young adult themes and escapist comic book fantasy. The comic book will tell the story of Locke Vinetti, who is a Manhattan teenager. Locke’s world is turned upside down when the dark alter ego who exists in his drawings threatens to take over his life. Locke struggles to control his newfound strength and fights to keep from losing Renee, who is the darkly beautiful girl of his dreams. Eventually, Locke winds up in a brutal rooftop battle where the characters’ lives, and souls, hang in the balance. Chris Krovatin’s also wrote 2005’s Heavy Metal and You, and he is working on an adult novel for Broadway Books. The Deadlocke comic is written by Arvid Nelson with art by Nick Stakal. “The film script for Deadlocke is just great,” says Nelson. “The dialogue crackles, and so does the plot. There's a fantastic tension between reality and fantasy. I think we really captured that in the comic, and I’m so excited for people to read it!”

Deadlocke To Be Comic Book And Movie Based On Venomous