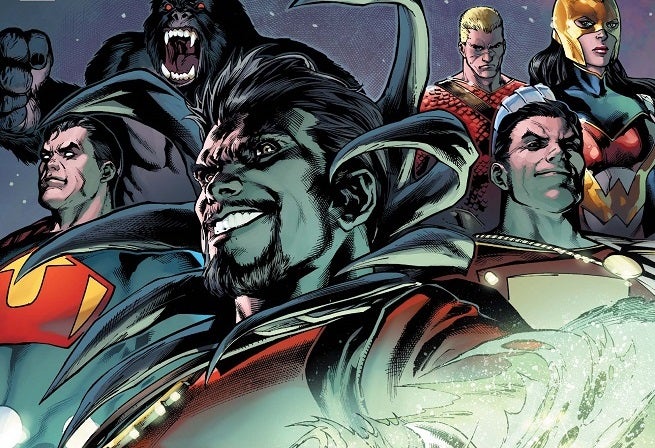 WARNING: Spoilers ahead for Convergence #6, on sale today. If you haven't read it yet, go to your local retailer or pick one up digitally and read along with us.

Editor's note: This week's installment of Decoding Convergence is running late due to a death in my family. I apologize for the inconvenience.

This week's issue of Convergence officially moved the story from the sword-and-sorcery stalemate of Skartaris back to the surface of Telos, where various worlds populated with DC superheroes are going after each other, battling to save their respective cities.

The stories of the forty monthly tie-in titles, then, have started to pour into the pages of the weekly spine book as Jeff King brings together probably the largest cast of worlds since Crisis On Infinite Earths...and Telos and Dick Grayson work quietly behind the scenes on a decision that could have far-reaching ramifications for the DC multiverse. 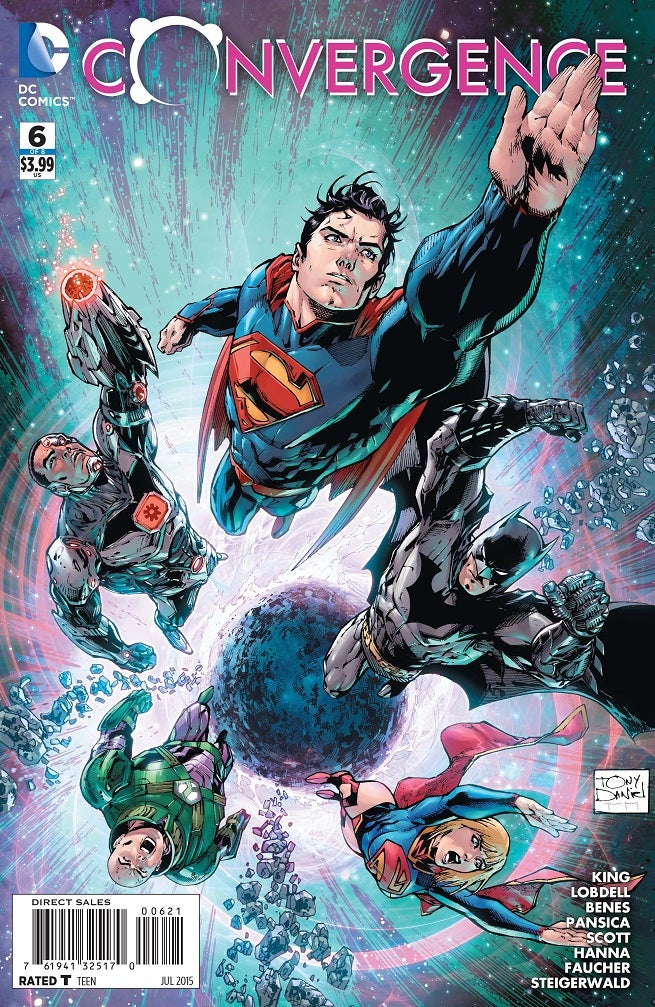 What made this the right moment to bring the New 52 heroes into the mix for the first time?

So for example, The Oracle -- great character, connected to the deepest traditions of storytelling. Not someone that I knew particularly but Dan & Geoff did. The Monitor, Darkseid, the Oans, those characters all were very easy characters for me to see being interested parties in what was happening.

You've talked in the past about how little history and context the New 52 heroes have for this kind of massive event. Is that part of the appeal of throwing them into the mix?

Of course. You start to see all the most powerful heroes from across the universe. This is a collection of power that hasn’t been seen, maybe ever, and that started to bring up the fun of characters meeting each other for the first time.

Their unfamiliarity was something because DC has such a glorious tradition of Crisis shaking all the characters to their roots. The New 52 haven’t experienced one in the same way before so their unfamiliarity was a fun contrast with the other characters who have a sense of it not being strange to see more than one of them on the same playing field. 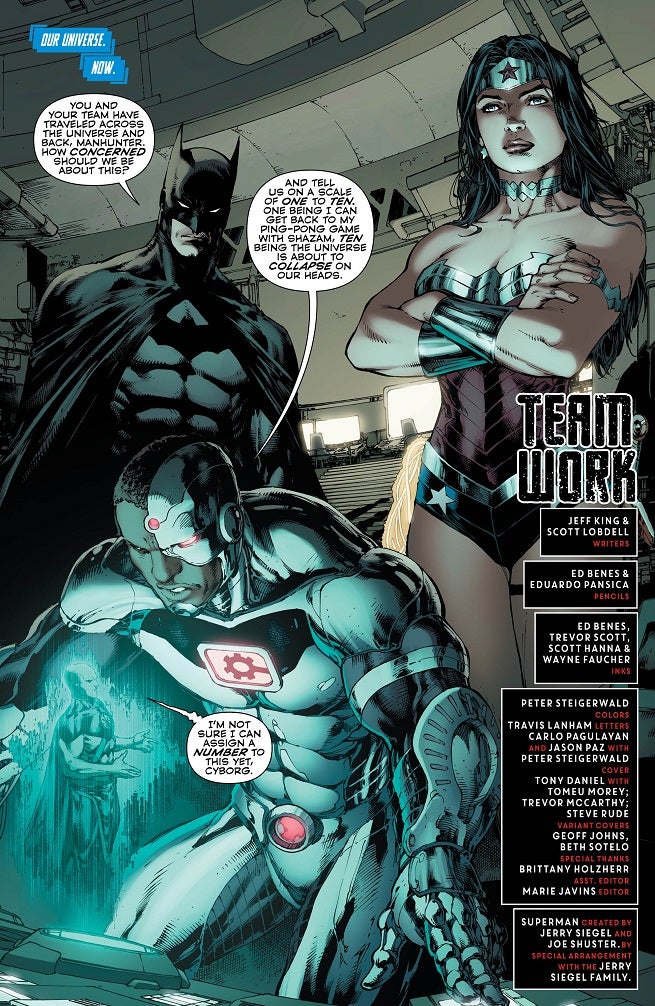 They always say that when you write a DC event, you always have to ask yourself, "Where is Superman in all of this." Is that part of what made the pre-Flashpoint Superman an ideal choice to lead the attack on Deimos?

Well, we knew that the Superman of Supermen was going to be a leader at the forefront and as you see at the end of Convergence #5, you see four characters who react to Deimos’ challenge: Parallax, The Flash, Supergirl, Superman...well, and Lois and their baby. So we knew that all of those characters were going to be the main players in what’s to come.

So from there it was easy to fold them into the storyline and that’s really, if you look at them, you’ll see what they’re going to be the main players in this event. When Superman steps up to speak, every hero listens, and what I was really excited about of course because I see a lot of the journey of this story through the character of Dick Grayson, Earth-2 Dick Grayson, was an opportunity for him to talk with the Superman of Supermen.

Since we saw Telos' speech reverberate through all of the #1 issues of the monthlies, will we see a lot of people interacting with Deimos' as well?

Yes, you’re going to see a version of this. Just like people now have figured out that some of the first month's books didn’t always start at the same place -- some of them started with the dome already up, some of them were domed, that was kind of the fun of it -- the Month Two books will treat it all a little bit differently themselves but generally they all will experience this moment, if that makes sense. 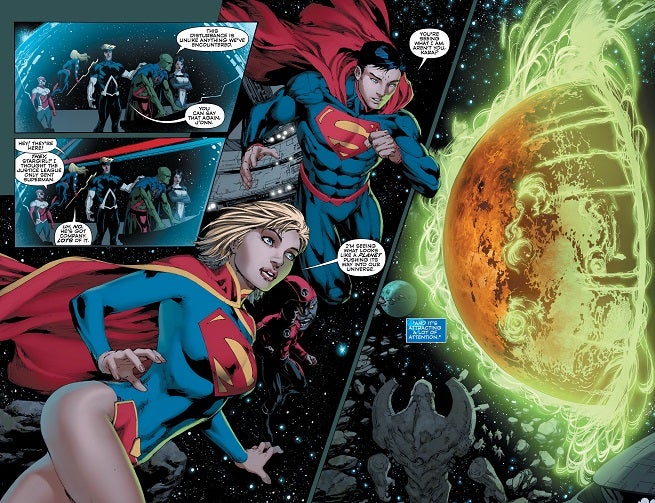 How did you decide what characters needed to be where as the battles started to spill out into the main book and everything started to get crazy?

There was a fair amount of tinkering between Scott Lobdell and I, and once that was sort of worked out, who we were going to have, then there was a little bit of additional conversation with editorial about adding or subtracting characters who could or couldn’t be there. But we knew for sure that some of the Flashpoint villain/heroes (because really what you’ve got here for the most part are hero vs hero fighting) and it’s sort of heroes who  fought each other for their own reasons in the past, and without giving anything away, I think if there’s going to be a way to turn the tide of battle, it’s not going to be who wins, it’s going to be who wins the hearts and minds. That’s a very important component of what’s coming up between now and the end. 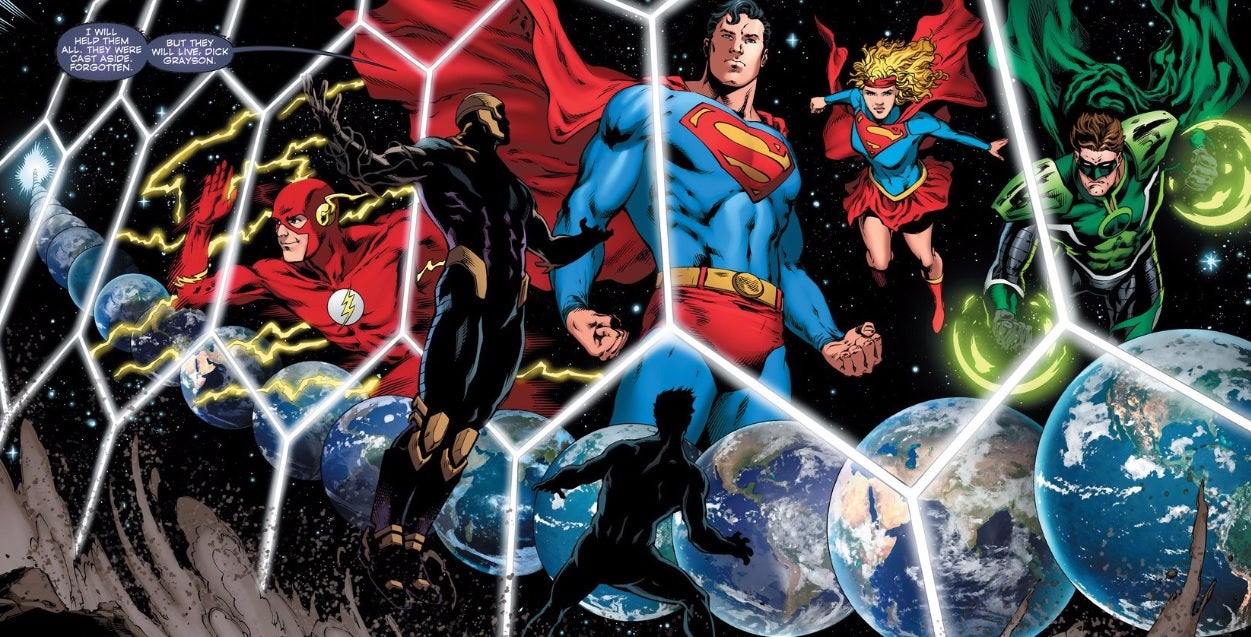 It appears that now, Telos has decided that he wants to restore the pre-Crisis on Infinite Earths multiverse. Do you think that having not only a mission but what feels like a pretty righteous one to boot gives him a whole new outlook for the rest of the series?

I hope so. Are you kidding? When we kind of got to this point in the story, and talked about the opportunity to maybe go back to that moment in time pre-Crisis when all of those characters were still existing between Earth-1 and Earth-2 and the Crisis hasn’t happened yet, that was pretty momentous in the story process.

When we kind of got there and said, “Wow. If you had the power of time and if you had all those slivers of all those civilizations and characters and timelines to repopulate the universe with, what wouldn’t you do?”

And so basically I hope we’re going to finish this issue wondering whether Telos and Grayson and the rest of the heroes are going to be up to the challenge of restoring those characters back into the universe that they were ripped from. 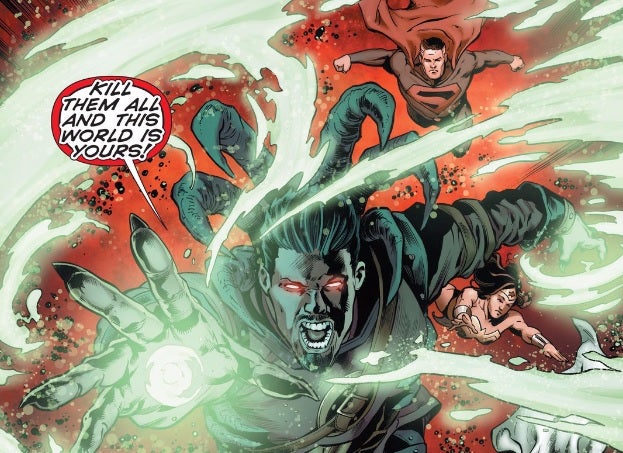 If there's one head-scratching beat in #6, it's the inclusion of Kingdom Come's Superman -- who to me is really the embodiment of Superman's purest self -- in the group of people working on Deimos' side.

I think what eventually you’ll figure out is that when the domes drop and they’re fighting for survival, that fight or flight instinct kicks in and you fight for the survival of the people you know and the people you love.

So even though he is the paragon, there is also a first responsibility to his world that is behind everything that he’s doing in #6.