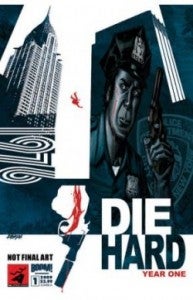 We're going to see more of John McClane and the 'Die Hard' series, but not in theaters. BOOM! Studios has announced a prequel to the action franchise. 'Die Hard: Year One' will take place in New York City in 1976 during the Bicentennial Celebration. It's McClane's first year on the job, and we're guessing we'll see plenty of fireworks. The issue will be written by Howard Chaykin and drawn by Stephen Thompson. First issue is due sometime in August.

Die Hard to Get a Prequel in Comic Book Form