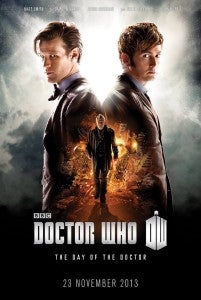 BBC announced today that the long-awaited 50th Anniversary special episode of Doctor Who will be titled "The Day of the Doctor." A promotional poster for the episode can be seen at right. "The Day of the Doctor" will premiere on Saturday, November 23. In addition to the episode title and image at right, the BBC confirmed the anniversary special will be feature length, with a 75 minutes runtime. "The Day of the Doctor is nearly here!" Said Smith, the series' outgoing lead. "Hope you all enjoy. There's lots more coming your way, as the countdown to the 50th begins now." "50 years has turned Doctor Who from a television show into a cultural landmark," said Steven Moffat, lead writer and executive producer. "Personally I can't wait to see what it becomes after a hundred." "The Day of the Doctor" stars Matt Smith, David Tennant, Jenna Coleman, with Billie Piper and John Hurt. This is the first time David Tennant and Billie Piper have appeared in the series since their farewells in 2010.