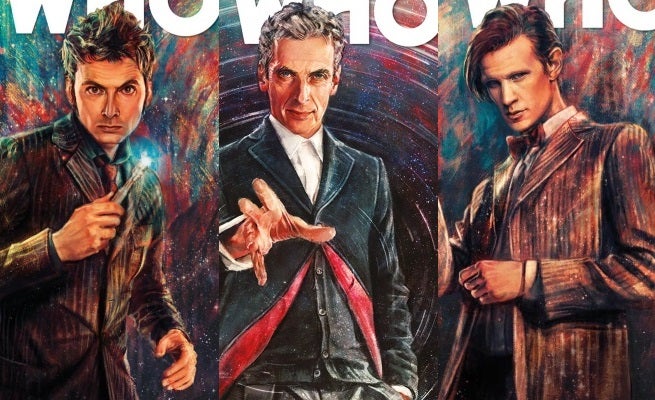 This summer, the Tenth, Eleventh, and Twelfth Doctors will team up for the first time in a five-part Doctor Who comic book event. Running weekly, from mid-August through September, the series will be written by Doctor Who, comics, and novel writer Paul Cornell, who wrote the fantastic two-part Doctor Who Series 3 story “Human Nature”/“Family of Blood,” as well as the Hugo Award-nominated comic book story, “The Girl who loved Doctor Who.”

According to THR, details on the story – including plot, title, and artist – are being kept secret for now, but three Doctors and a writer held in as high regard by Doctor Who fans as Cornell suggests something big. The Tenth and Eleventh Doctor have met before, during the Doctor Who Fiftieth Anniversary Special, but this will be the first time either has met the Twelfth Doctor (though his eyebrows made a cameo in the same Special).

As far as companions go, Clara Oswald will be accompanying the Twelfth Doctor, and the event will also feature the companions created within the pages' of the ongoing Titan Comics Doctor Who series, Gabriella Gonzalez and Alice Obiefune.

The still unnamed Doctor Who event comic will launch on August 12, just before Titan Comics' “Doctor Who Comics Day” on August 15.

Doctor Who Event To Team Up Tenth, Eleventh And Twelfth Doctors This Summer