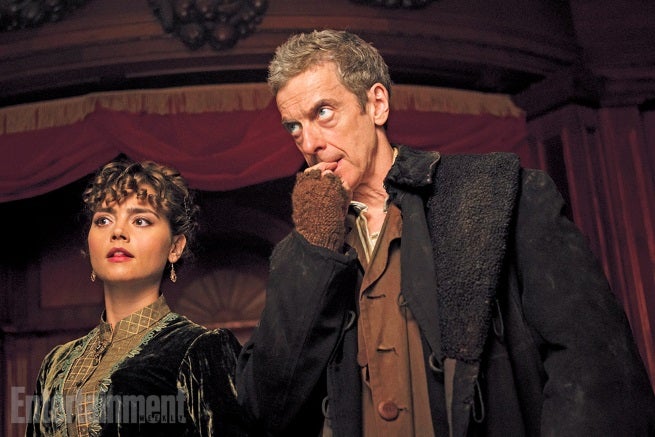 The BBC has released a new image from Season 8 of Doctor Who, giving us our first look at Peter Capaldi as the new Doctor and Jenna Coleman as Clara Oswald.

Coleman tells Entertainment Weekly that Capaldi's Doctor is "a lot fiercer," than the Doctor of outgoing star Matt Smith. "This man is a total adrenaline junkie."

Capaldi's previous credits include The Fifth Estate and World War Z, as well as a role in the Doctor Who spinoff series Torchwood: Children of Earth. Capaldi made a brief cameo in the Doctor Who 50th Anniversary special and appeared in full at the end of the 2013 Christmas special. He'll make his official debut in the Season 8 premiere of Doctor Who, titled "Deep Breath."

"It's a big introduction—he's the new Doctor," says executive producer and head writer Steven Moffat, who wrote the episode. "There's no point pretending that it's not the most interesting, dynamic thing that you've got to sell in that first episode. It's going to be about 'What's he like? How's he different?' I suppose it feels a bit like a character piece, but there's plenty of action and nonsense and jeopardy, as there ever is in Doctor Who."

Season 8 of Doctor Who premieres August 23 on BBC America.