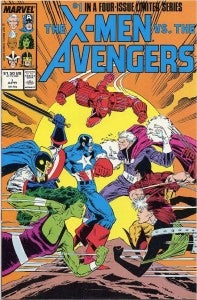 Here we are again!  It's time for another edition of Dollar Bin Discoveries, the feature that has me, your faithful writer, scanning the highs and lows of the comic book store "dollar bin" to see if there's buried treasure or just a waste of a good dollar.  This month's selection takes us back to the glory days of the late 1980s, to an event that was pretty damn awesome at the time and that will see a new light of day this coming spring and summer from Marvel.  Everyone by this point knows that Marvel will be launching Avengers vs. X-Men, a action heavy series that will see the two stellar teams battling it out with one girl, Hope Summers, at the center of a lot of debate and attention.  Before this summer's smackdown was the original duel between these two teams.  Let's take a look now at the book that started it all, way back in the days of Rogue's punk hair, Storm's leather look and Thor's beard. The Book:  The X-Men vs. The Avengers #1 The Date: April, 1987 Summary:  The story opens with an interesting array of some of the 1980s most visible Avengers such as the female Captain Marvel, Black Knight and She-Hulk alongside staples such as Thor and Captain America attempting to stop a disastrous groups of asteroids from hitting the Earth and wiping out, of all things, a K-Mart (early product placement?).  As most of the meteors are destroyed, the K-Mart is evacuated (never thought I'd write THAT sentence in an article), and everyone gets out ok.  In another part of the world, the USSR to be exact, a train wreck is underway, but the Soviet Super Soldiers are on the scene, with Darkstar, Vanguard, Ursa Major and Titanium Man to help end it.  It's a classic 80's depiction of "Mother Russia", with strained Russian accents leaping off the page, more mentions of "comrade" than you can shake a hammer and sickle at, and plenty of red inks and shading to remind you that red is associated with COMMUNISM!!!  I digress. The Russians soon determine that the trouble comes from an electromagnetic disruption that came with the asteroids, and they decide to get to the bottom of it all.  The action then cuts to a lovely day at the pier with the X-Men, decked out in their beach best.  In keeping with the 80's realness, Dazzler is there, as well as a mohawk-sporting Rogue.  Havok is there as well, along with Wolverine, and all is not peaceful with the recent addition of Magneto to the team, as indicated by Havok's internal dialogue.  He may have good reason to be suspicious.  Part of the asteroid that crashed appears to be part of Magneto's former base, Asteroid M, and he takes off to explore the fragment without trying to attract attention from his new teammates.  Obviously, that will not work, and pretty soon Wolverine smells a turncoat.  The Avengers, too, are debating the news that this once formidable fortress has crashed, and we are treated to a walk down memory lane of some of Magneto's dirty tricks from years past. The Avengers resolve to bring Magneto in for his crimes, with comparisons to Hitler thrown about for good measure.  Suddenly, the Avengers, who have come to take Maggie to the World Court for his crimes, the X-Men, who want to find out what's going on, AND the Soviet Super Soldiers all appear on the scene.  There's lots of posturing in these last few panels, which sets up a maddening tease of a battle royale that will, of course, happen in the next issue. Issue Worth:  There's a LOT of talking in this issue, giving the reader a lot of backstory to chew on, especially when the Avengers are discussing Magneto's crimes.  It's one of those desperate attempts to get readers into the story who may not know all the players.  By telegraphing tons of backstory, the plot and pacing of the issue suffer. It's interesting to look back at how different the teams were back then and to see where we are now by comparison.  However, that doesn't really make up for the fact that the complete LACK of any strong action here, especially for a miniseries titled The X-Men vs. The Avengers.  Skip this one and go straight to this summer's main event.  It certainly looks more promising.  Final Value: .50

Dollar Bin Discoveries: Avengers vs. X-Men (or vice-versa) Round 1 Edition