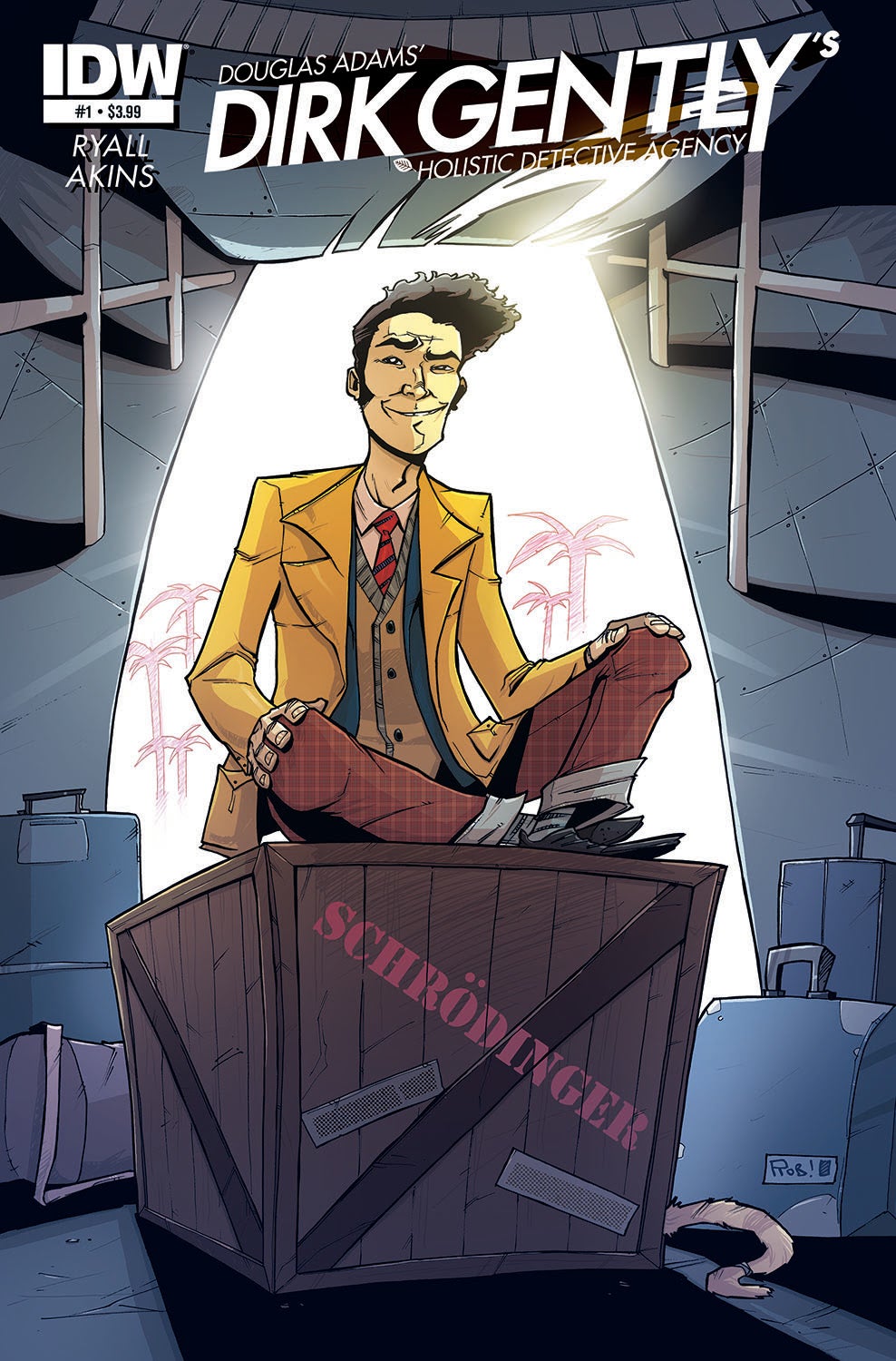 IDW Publishing and Ideate Media today announced at New York Comic Con that Dirk Gently will be appearing in his first-ever comic-book series in 2015.

Following the recent announcement that Dirk Gently will be developed for television by IDW Entertainment and Ideate Media with Circle of Confusion as Executive Producers and Max Landis as showrunner, IDW Publishing will launch the comic book series in the spring. The series will be written by Chris Ryall, IDW's Chief Creative Officer/Editor-in-Chief and creator/writer of series such as Zombies vs Robots, Groom Lake, and The Hollows. The series artist will be Tony Akins, and Chew co-creator Rob Guillory has contributed a first cover image, seen above.

"I know that an American writing Dirk comics is going to get a certain segment of British Adams fans a bit brassed off," said Ryall, "but, much like in the case of the oft-referenced Schrödinger's cat in the Dirk novels, we can all agree that until the world opens these comics, they are both good and not good, right? And certainly Adams' writing transcends all borders and has rightfully earned him a worldwide following. I can't wait to bring Dirk into the world of comics."

"Douglas was best known for Hitchhiker, but his real creative passion was always Dirk. Of the two series, this was his secret favourite.  I know he would have smiled upon its re-incarnation as a comic book," said Ed Victor, Douglas Adams' long-time agent and friend.

Adams' Dirk Gently, who appeared in Dirk Gently's Holistic Detective Agency, The Long, Dark Tea-Time of the Soul, and the unfinished novel that Douglas was writing at the time of his death The Salmon of Doubt, is a charismatic, troubled and troubling figure, prone to ruining the lives of those around him while proving his prowess as a detective solving cases by tangential means using the fundamental connectedness of all things as the basis for his detection. He's been troubled by murder, time-travel and a couch that couldn't possibly have gotten where it was and could not possibly be removed.

Besides his appearance in the novels, Dirk Gently was the star of a TV series on BBC4 from 2010 to 2012, but the show was not renewed after its first full season and ultimately the rights lapsed.