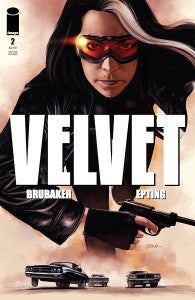 #2, from the Captain America: The Winter Soldier creative team of Ed Brubaker and Steve Epting, has sold out at Diamond Comics Distributors and will be reprinted, Image Comics announced today. The book may still be available at the retail level, and digital copies can be purchased via ComiXology and the Image Comics website. Issue #2 picks up right after #1 ends, jumping straight into the action as Velvet Templeton flees her own agency and races to uncover why Agent X-14 was killed. Dead bodies, ruined lives, and angry soldiers block her path toward discovering the truth. The second printing of Velvet #2 (Diamond Code OCT138253) will release on 1/8. Velvet #3 releases 1/8 and will be available for pre-order with Diamond Code OCT130631.

Ed Brubaker and Steve Epting's Velvet #2 Sells Out, Goes Back to Press