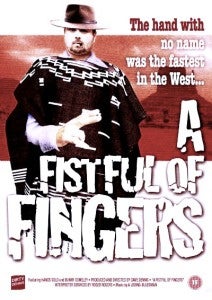 Edgar Wright's A Fistful of Fingers, his long-lost parody of spaghetti Westerns, will be released on DVD in about two years' time, the director told Marc Maron on his WTF Podcast.

The film, which had an official VHS release but has beeen largely out of circulation since, periodically pops up on YouTube. Wright always has it taken down which, given his pop-culture-nerd credentials, has always seemed a bit odd to some viewers. After all, if there's no money to be made, why not let the fans see the film?

Well, it turns out there is some money to be made. Wright, discussing his career on Maron's popular podcast, revealed that he has the illegal versions removed from the Internet because he has plans for an official release in time for the twentieth anniversary of A Fistful of Fingers in late 2014 or early 2015 (the extremely limited one-screen release of the film when it was first made leaves the exact date, and whether he'll acknowledge the theatrical release or the VHS release, up in the air a bit).

Whether it will actually happen, with the slow and meticulous filmmaker working on Ant-Man during that time (it's reportedly slated to start production in Georgia in May) is anybody's guess.

The film was one of Wright's first, made when he was a teenager and shot on Super 8.  It was made by the 20-year-old Wright when a handful of films he made as a teenager won him a video camera and a cash award to be used toward a professional film.