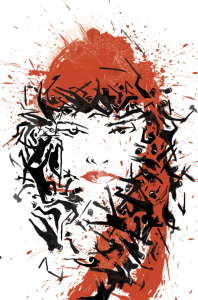 Haden Blackman, who publicly stormed off Batwoman after a disagreement with editorial this fall, will head to crosstown rivals Marvel Comics to write Elektra, launching in April with a new #1 as part of the All New Marvel Now initiative.

Artist Mike Del Mundo will join him. The series was originally announced as having been written by Zeb Wells, but the writer told CBR today that his TV commitments made it impossible to stay on board.

"Anyone who knows me knows this book has been a dream of mine since I started writing comics ten years ago," Wells said. "Unfortunately, after [editor Steve Wacker] moved heaven and earth to make the book happen, commitments in television won't allow me the time to craft it with the care it deserves. So I had to make the heartbreaking decision to walk away, and Steve and Sana had to make the less-heartbreaking decision to replace me with someone twice as talented: Haden Blackman of Batwoman fame. It's a surreal feeling to be this excited for a book I wanted to be writing so badly, but I can't wait to get it at my comics store in April. And I want to thank everyone at Marvel for being understanding about the whole situation. Hopefully, I'll be back at Marvel soon with a new project when my schedule opens up."

“I’m extremely excited about this series,” said Blackman. “Elektra is a complex character who is still searching for her identity and purpose. My goal is to put Elektra into new situations facing terrifying enemies and hard moral choices she hasn’t encountered before. All the while exploring her evolving motives and personality.”

Series Editor Sana Amanat teased, “Elektra sets off on a treacherous trek through the far corners of the Marvel Universe on a mission of salvation. For the first time in her life she must protect instead of kill—in the hopes of finally expelling the demons that have terrorized her for so long.”