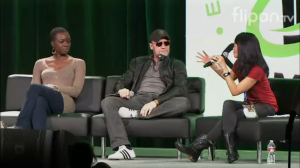 This evening at the Emerald City Comic Con, Michael Rooker and Danai Gurira of AMC's The Walking Dead held court at a Talking Dead panel, discussing their roles in the series and experiences on the set. After about 30 minutes of discussion with a moderator, they opened the floor to questions. Here are some of the highlights:

A fan asked them - since both of them have notable bladed weapons--if they'd ever considered licensing a cutlery line.

"A cutlery line--yes! Like for a one-handed person?" Rooker joked.

Rooker was asked: What's Oliver Stone like to work with?

"Oliver--Ollie...he sits in another room somewhere and watches the monitor and every now and then you hear him holler 'Just do it!' He loves mistakes, so if you go in and something happens he'll put like 15 actors in the same room and he loves to have the actors spar one another with their words in the scene and he doesn't like a lot of rehearsal. We spent about two or three weeks at a table read once a day preparing for JFK and basically got all the actors around the table and you're reading through and every now and then you go 'God, that line--it doesn't work, it feels like it should be your line...and by the time we got on set we were ready to go and so he didn't have to do a lot of directing in that way; he did all the directing at the table read."

Danai Gurira was asked: What's it like to train with the sword?

"It was awesome--initially it was extremely, extremely painful. I thought I was athletic until the day I picked that thing up. Even just learning how to hold it right--that itself is not simple."

"After a while I started to get more comfortable with it. I was training with one guy who had been doing it since he was eight years old in Japan, and am I ever going to be as comfortable as him? No--but I have learned to be Michonne with it--to get into the power and connection between her and her chosen weapon, which is kind of like her security blanket. Now I work out with it in my own living room but initially it was very painful."

Gurira, a self-proclaimed "scaredy cat," was asked about getting over her fears.

She said that at first it was difficult but eventually she got used to the zombies. "I was like, 'okay, they can't climb walls, I'm on the second floor...," she joked. "By the time I got to the set, I was really kind of fascinated with them."

Rooker interjected, "So you're not scared anymore?"

"Shut up!" Gurira shouted, laughing. "It's not scary to me anymore now, and then you have to start thinking like Michonne and she ain't scared."

An audience member asked: Is it cool for Rooker not being in the comic and not knowing what his character will do?

"You never know what I'm gonna do when I'm in the scene on the day; there's always an element of surprise and I think that's what's cool about my character and it's what cool a lot of times about my work," he said. "I prefer that the other actors are surprised along with everyone else. I think it's cool to have that kind of spontaneity....I like the scenes to be uncomfortable and you don't know what's going to happen and you're a little afraid of the scene."

On the question of fear, he was asked: Are you afraid of chocolate covered pretzels?

"I actually love chocolate covered pretzels--do you have some for me?...You bad, bad girl!"

[Note: This refers to Rooker's role in Mallrats, when he contracted a comical case of food-poisoning from...well, just watch.]

Gurira was asked about joining the ensemble after it was already established this season...

"Long before I got there, I got called and contacted by people in the cast and a play that I'd written was at a theater in Los Angeles at the time and they all came and watched it. So I was getting so much support from them before I was even on set," she said. "It really became sort of organic in terms of being embraced by the group....It's really a blessing to become part of a group like that."

How will it affect the relationship that Daryl stood up to him?

When asked about Merle "beating down" or bullying Daryl, Rooker took exception.

"Merle has never beaten Daryl down--he loves his brother," Rooker said. "The only thing Merle does for his brother is try to lift him up! Who do you think saved his little ass in that ravine when he was dying? The thought of his brother coming and being there and giving him motivational speeches like 'get up or I'm gonna kick your goddamn teeth in.' Without that, baby, Daryl would have died."

"He is deeply in the point of view of Merle," said Gurira. "Norman might disagree with what he just said and the thing that was beautiful to me about that scene was that you did see a younger brother stand up to him in a slightly different way than he's ever done before but then I also saw the pain of both of them, so beautifully played--there was so much pain that he had when he saw his back and the look in Merle's eyes when he saw his little brother's pain."

Gurira was asked what it was like to play such an iconic, powerful role.

"It's really humbling and it really feels amazing. In another realm that's kind of what I was trying to do," she said, adding that in her own writing, all of her leads are women, generally of lower classes whose voices aren't often heard. "Being able to play a role where what I've always been trying to do gets seen by such a bigger audience, it's really a blessing. Whenever I have young girls come to me and tell me what Michonne means to her--I can die happy."

Rooker was asked: Is there any limit that just disgusts you [in terms of violence on the show]?

"We've really done so much already that I never ever expected Middle America to accept--seriously!" Rooker laughed. "I mean, we got head shots and axes through the brain and a lot of really gory stuff. I don't think there's anything now in the past or in the future that Merle could ever do that is going to be worse than some of the stuff we've already done. I have no idea of what Merle could ever do that could be more horrifying than some of the things I've already seen on the show....Where do we go from here, right? Zombie head tossing! A new game!"

Roman Reigns Rips CM Punk for His Past Comments, But Would Still Have a WWE Match With Him