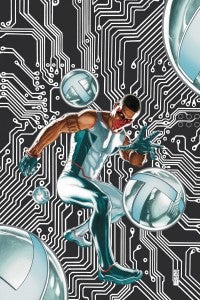 In advance of next week's release of DC's recently-cancelled Mr. Terrific in collected edition, ComicBook.com got in touch with Eric Wallace, the comics and TV writer who took on the herculean task of reinventing the character for DC's New 52 initiative. Wallace shared with us his vision for the book, his hopes for the characters and a philosophy of writing every issue like you might not get another one. We'll share a bit of it here, and then the full interview will run on Friday when our Panel Discussions podcast returns to its original schedule of appearing regularly every other Friday. I thought Mr. Terrific was one of the ten best DC books to come out of the relaunch, once all was said and done--but it was a smart book with a nonwhite lead who didn't have "Bat" or "Super" in the name--so it's incredibly hard to sell  that kind of book in today's market, isn't it? Yeah, it is. It's funny--I used to joke with the creative teams--"Okay, I'm writing this issue! I'm writing it like it's that last, because I never know! You never know how long this is gonna go!" [Laughs] But what that did, seriously, is it really made us go for it with every issue. One thing I can say, no regrets, we didn't leave anything behind. Everything we could humanly get into those eight issues is there. Characters, storylines, we managed to get into outer space, or dimensional space, by issue four for a two-parter. We tried to introduce at least two or three solid villains, one of which I never got to bring back, unfortunately. There are two villains that we never got to bring back. There was kind of an uber-arc for the first 12 to 14 issues that kind of dovetailed together and the character of Miles Dalton, who's in issue one in the red suit--he's actually a villain named Red Dragon. And he was actually set to return with his entire team of people to get revenge on Mr. Terrific in the next issue--that would have been issue nine--and they were called The Dalton Gang. [Laughs] That's the only thing I was so looking forward to getting and I was trying to get it into issue eight, but it just wasn't possible. Especially once the book's cancellation was announced there were so many business things that needed to be handled in that final issue to set up Worlds' Finest and all the other Second Wave books for The New 52. 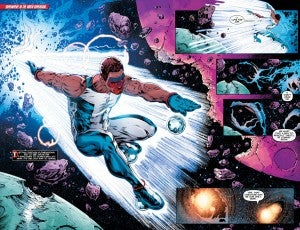 It's interesting. I think that in the New 52, they don't want these characters to just vanish when they're cancelled, but setting them up in a new book also means taking some of the page count and some of the options away from the people who are writing those last issues of the monthlies. I'm glad Mr. Terrific turned up in Earth 2 #2. I got an advance copy of it and that was very nice of them to send that. I was like, "Oh there he is! He turned up!" So if you like the character, follow him in Earth 2. I have no idea where they're going with the character. I gave them a few ideas, I said run with it, but I don't know if they'll run with them or not. I know James Robinson, the writer of that book is not onl a great human being but a fantastic writer whom I just absolutely love so I know he'll do great things there because he's so awesome--so I'm not worried, but I am curious. Mr. Terrific #8 was interesting, too, because while it's a continuing adventure for the character, he's leaving for all intents and purposes this plane of existence for an undetermined amount of time and as far as the rest of the people in the book know, Michael might be dead. So you had to kind of keep things on that end tight enough that the open-ended ending for Michael didn't damage everything else you built. I wish I could revisit the character and write after he returns, everyone's response. How many years has it been? What's gone on? What's happened to his company? That's somebody else's duties now but when you spend this much time with the characters, you fall in love with them. I definitely fell in love with Michael Holt, with that world, with his supporting cast and all of the villains that we got to do but also all of the villains that were created that never even got to appear. It's like, "Alright--I guess I'll use them somewhere else." And on that note, do you have anything else lined up at DC right now or are you waiting to find out what your next big project is there? Waiting to find out what the next big thing is. I've got a short story I've contibuted to the Foster Anthology that comes out in July. Foster is an independent kind of horror-crime kind of supernatural, cool action comic from Brian Buccellato, who co-writes The Flash with Francis [Manapul]. It's a great book and I'd met Brian through the New 52 West Coast gang, as we were called at one point, and we were having a beer and hanging out and he said, "Hey, this is my new comic book, this indie thing I have coming out," and he showed me some pages that were cool. Cut to three months later and he was asking folks to help out with an anthology--so I think it's five, six, seven, eight stories, all about eight pages long, and he asked me to contribute along with some other DC folks you'll know. Mike Johnson from Supergirl, Kyle Higgins of Nightwing, myself from Mr. Terrific, so it really turned out. It's really exciting and because it's not working for the Big Two, it's rather violent. [Laughs] You don't have any restrictions on language and sexuality and things like that, so it's definitely going to be pretty awesome and that was a nice change of pace coming off three and a half, four years of working with DC and working on great books that I loved, by the way. But even as violent as Titans was, which was a very violent kind of book, very dark, there's still a line you can't cross in mainstream Big Two comic companies. For much, much more from Eric Wallace, keep your eyes peeled on Friday, when our Panel Discussions returns to its original biweekly, Friday schedule Wallace will be our guest along with a brief conversation with The Pantheon Project's Erik Taylor (you can check out a bit of our interview with him here, and forgive us for not getting a podcast out last week due to a family medical emergency).