This week saw the release of Erik Larsen's Savage Dragon #202, where the writer/artist took advantage of a 180-panel format to prove the point that even with nine panels on a page, you can still have a wide variety of looks and panel structures.

In fact, he didn't repeat a page layout and told us that he only included a traditional nine-panel grid layout because, well, why not?

Meanwhile, the issue itself is the culmination of a number of thing the series has been building to for a while. There's another game-changer for Dart, as well as some major upheaval in Malcolm's personal life and a decision is made about the Malcolm/Maxine relationship that shifts things yet again after the game-changing Savage Dragon #200.

As always, Larsen joined us to talk about the new issue.

Remember that these postgame interviews are spoiler-heavy. If you haven't read Savage Dragon #202 yet, go buy a copy and follow along with us.

This issue was packed with content. #201 had no splashes in it either but fewer panels. What compelled you to draw an entire issue with nothing but nine-panels pages?

[ed. note: The panel layouts for this issue's pages can be seen below.] 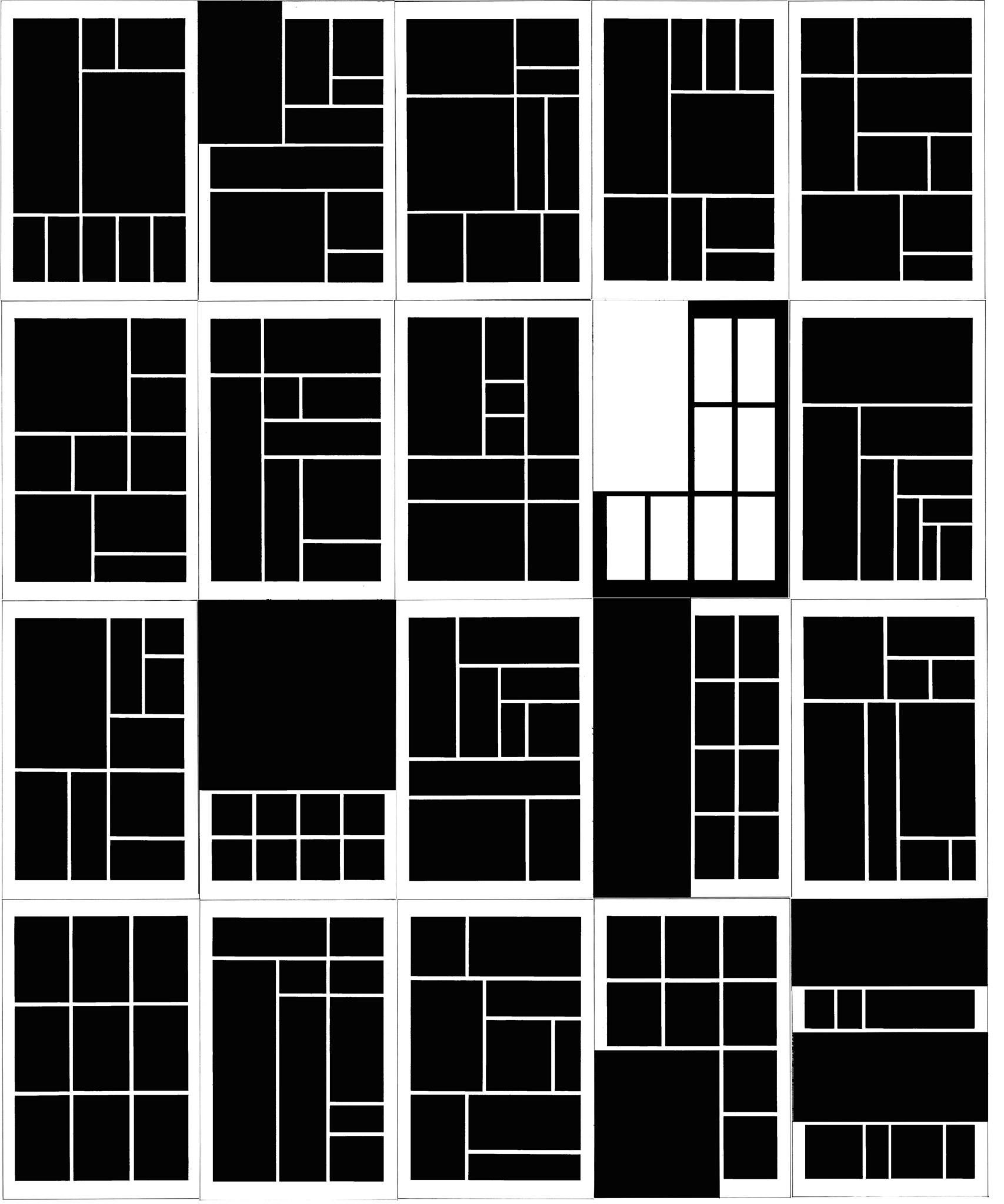 Mike Norton posted a meme with Batman slapping Robin following an exchange where Robin says, "Page 1, NINE PANELS, Panel 1: BIG SHOT--" and Batman retorted "There are no big shots on a nine panel page!" to which I thought, "Well, that's bullshit--of course there can be a big panel--just draw the other panels smaller." That was enough of a seed to get me wanting to take the challenge for Savage Dragon #202 and have every page in it have NINE panels with no two pages having the same panel configuration.

And after doing an all double-page spread issue with #199--a complete story that was only 10-panels long--I figured I was due to go to the other extreme and do one where it was 180-panels. A simple nine panel grid could get pretty monotonous and it wouldn't give me any big panels so I thought I'd make it so most pages had at least one bigger panel. I did toss in one grid just to do it but the idea was to not repeat panel configurations.

Yeah--kind of an idiotic response given how much work I made for myself but I'll often do something like that just to make my life interesting. I've actually done issues with more panels. #113 had 210 panels and #185 had 200 so apparently I'm a glutton for punishment.

We actually mentioned last time how many of Dart's inner circle were female, but Malcolm is at a time right now where he's been very fixated on the women in his life. Is that kind of the perfect moment to have an issue like this where you debuted the cover on Facebook and all the comments were a variation on "girl trouble!"?

Yeah. Not sure what I can add to that. That was kind of the idea going into this--to focus on the women in his life both good and bad.

You're not hanging onto plot threads for very long before paying them off here, huh? The sex tape basically came into being and then blew up.

That said, with Tierra knowing, and Angel having seen "Speed Racer," that's still kind of a threat hanging over the relationship between Angel and Maxine, isn't it?

It is and isn't. At this point Tierra and Angel aren't close so anything said could be taken as "You're just trying to start shit." Not that it couldn't be thrown in her face but at this point Angel is not that likely to take anything Tierra says at face value.

And really, come on. There's worse movies than Speed Racer, aren't there?

Oh, sure. But Maxine picked it because she knew Malcolm liked it and not many others did so anybody else wouldn't be that tempted to watch it. If she'd written the name of a more universally loved movie on it there's was a better chance a visitor might throw it on. She wasn't counting on Malcolm putting it on. 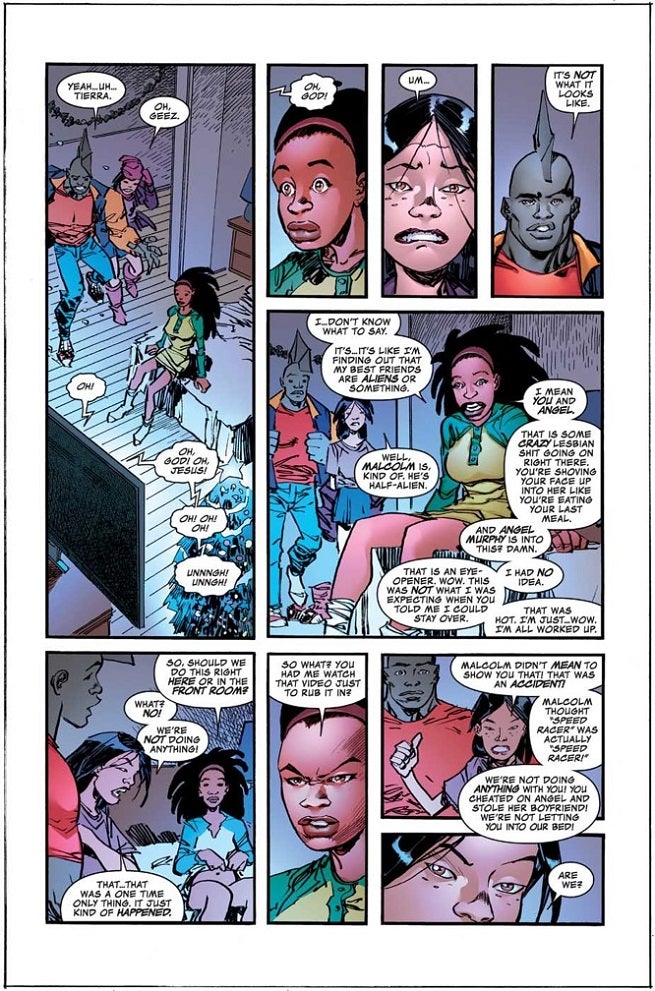 Do you think they would have let Tierra in on their whole arrangement if not for her finding the Speed Racer DVD?

There was the awkward shower thing last month but--yeah--that wasn't necessarily going anywhere. It made it easier.

Everyone's friends and all, so I can see them all falling into this, but the internal politics of this group could get ugly fast, especially when you add Angel into the mix. Is there a long game for a new status quo with Malcolm and the girls?

Oh, sure. I'll often plot out a few options and then pick the one with the most potential. The three remaining fast friends probably has the least potential story-wise. There's not much fun to be had there.

Melvin apparently doesn't read this book to know that people who try to give themselves powers rarely do so without paying a big price.

He pays the price all should, really, for not reading Savage Dragon. Let that be a lesson to all of you.

I thought the Malcolm/Angel thing from during the Invasion was widely known, but here Angel is surprised to hear people aware of it. Was I mistaken?

There was a story supposing that something went on but it was adamantly denied by Angel and Malcolm kept it pretty mum. He told Maxine later, I guess, and she mentioned it on the disk she recorded, which clued in Tierra.

In other news, Tierra is kind of horrible. How long has this take on her character been in the works?

I don't know if horrible is the right word--she's pretty selfish and self-centered. She's driven and wants what she wants but it's not as though she fought back in a substantial way when punched. If she was truly awful she'd have set fire to the building or something or at least punched Maxine in the eye. 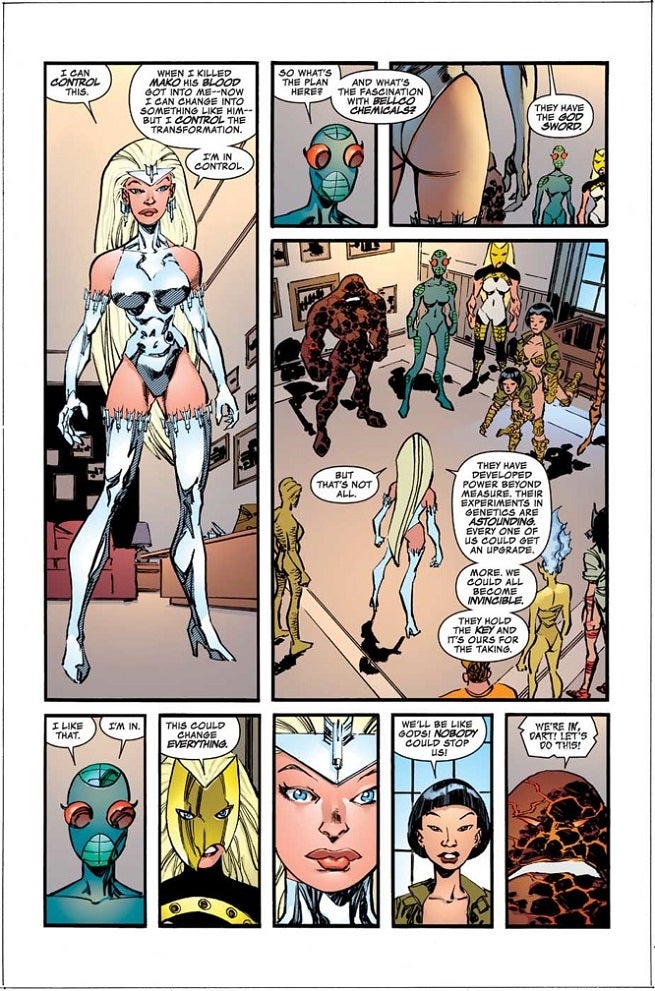 Also, Maxine does a pretty abrupt about face on the whole "we can't just leave her in the cold" thing. Will Malcolm be addressing that, or will he just be happy to have Tierra out of the house given all the conflict?

I think he's pretty relieved to have that over with. We end the issue on Christmas and Angel arrived at least a day or two earlier so if there was any further discussion we missed it. I think the three have moved on.

I think my favorite part of the issue -- and I felt this way about the main story in #200, too, a little bit -- is the interaction between Malcolm and Angel during the fight scene. Did you know going in that the post-game analysis was going to be fun, or did it just kind of happen in 200 so you used it again here?

I generally go in with something of a game plan. I like Angel and Malcolm's rapport because they've known each other a while and they had that whole "will they or won't they?" thing going on. It's more fun to write now because there's so much more to play with--more to banter about.

You know, Dart's actual darts have been a surprisingly ineffective weapon lately. Especially with reduced powers, will she be leaning more on the sword?

I would think so--if she's dealing with Malcolm. He's figured out that, despite his regenerative powers, he's better off not taking that hit so he's pretty alert when facing her. I would suppose if she really went balls out and started throwing them 20 at a time he'd have a tougher time with it but a short volley like that isn't beyond what he can handle. 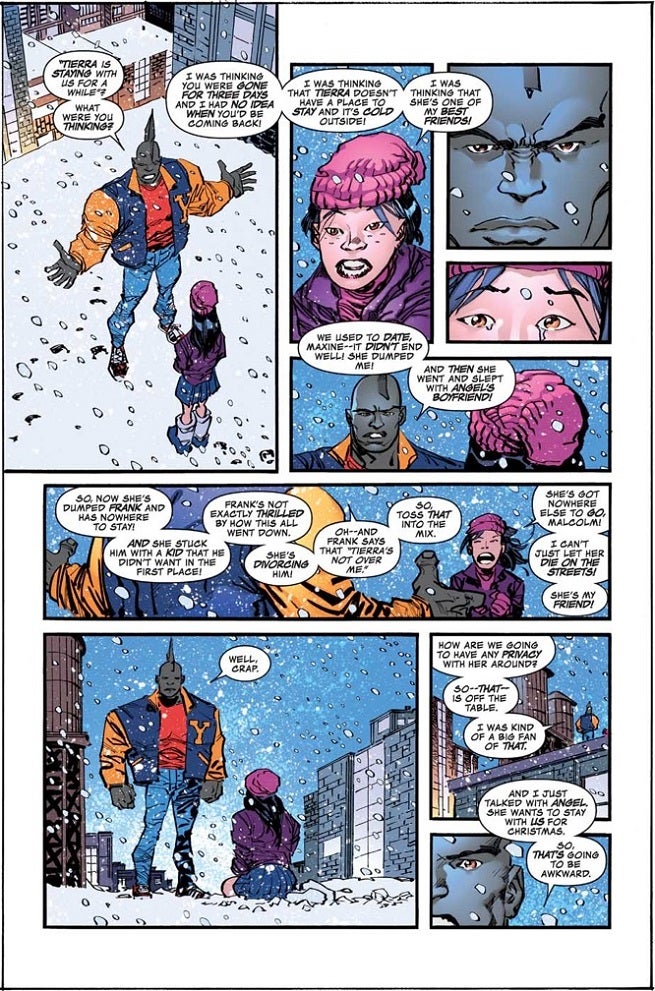 I think the Heavy Flo/Bellco fight may be the strangest and grossest one we've seen in this book in a while. Did Flo have a special panel in her costume to allow her to use her powers?

I would think so but I never really wanted to show that. Sometimes it's best to leave some things up to the readers' imaginations.

Setting up Mako-Dart last week just to take it away this week...is it fair to assume that even though her first try went 180 degrees wrong, we'll see more of Dart trying to obtain the means to power up again?

At this point she must be thinking that Overlord had a good thing going there, locked in that impregnable armor. Certainly exposed as she is she's come to see that she's somewhat vulnerable. There's also the matter of her having ingested blood from the Little Wise Guys some time ago. In theory she was forever young--with her having had her "powers" taken away presumably that's gone too. Does she have reserves of their blood? Of her own blood? That's not been explicitly spelled out so we're unsure what her options are at this point.

Was Tierra kind of necessary to escalate things to a head where Malcolm wasn't comfortable anymore, or do you think that if it were just he, MJ and Angel they would have that same talk sooner or later?

I think it was coming sooner or later. Maxine had already said that "after marriage" that kind of thing was off the table. We didn't see anything beyond that to know if Angel was informed of the new plan but since Angel wasn't all that comfortable with it after the first time it's likely she'd be okay with that. I'll likely address that at some point.

Erik Larsen: Savage Dragon #202 Was "Kind Of An Idiotic Response" To An Internet Meme