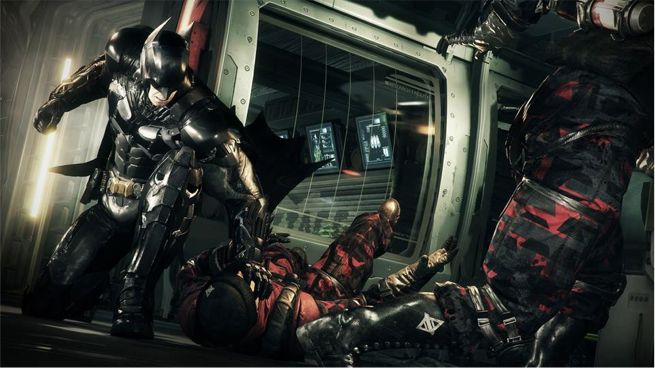 The Entertainment Software Ratings Board has released their justification for Batman: Arkham Knight’s Mature rating.

The ESRB surprised many gamers last month when it was first announced that the fourth installment in the Batman: Arkham video game series would receive a “M for Mature” despite the “T for Teen” rating its past three installments earned. While the game’s developer, Rocksteady, admitted that their latest Arkham installment would be markedly darker, specifics were never given.

But on their website today, the ESRB wrote that Arkham Knight would include “Large bloodstains/pools of blood appear in crime scenes and in the aftermath of violent acts,” and “a person torturing a character on a bloody operating table,” while also letting players “shoot unarmed characters and a hostage.”

It’s curious that players can shoot characters, given the fact that Batman has a strict no guns policy. Plus, harming innocent civilians is a pretty big no-go in most superhero handbooks. The same ESRB description states earlier, however, that players will “primarily” play as Batman, suggesting that other, darker characters, might be playable in the main game. Harley Quinn and The Red Hood will be playable characters via an extra DLC pack available on the game's release day however, so perhaps the description is referring to that.

The ESRB’s entire description is below:

“This is an action-adventure game in which players primarily assume the role of Batman as he battles several villains spreading chaos across Gotham City. Players traverse a variety of locations around Gotham while battling thugs, examining crime scenes, and occasionally rescuing hostages. Players engage in melee-style combat using punches, kicks, and gadgets (e.g., batarangs, explosives). Enemies cry out in pain when struck, and some takedowns are highlighted by brief slow-motion effects and loud impact sounds. Some sequences allow players to use tank-like vehicles with machine gun turrets and rockets to shoot enemies; a vehicle's wheels are also used to torture an enemy in one sequence. Cutscenes depict characters getting shot (on and off camera) while restrained or unarmed. Large bloodstains/pools of blood appear in crime scenes and in the aftermath of violent acts; one room depicts a person torturing a character on a bloody operating table. During the course of the game, players can shoot unarmed characters and a hostage. Neon signs in a red-light district read “live nude girls” and “XXX.” The words “b*tch,” “gobsh*te,” and “a*s” appear in the dialogue.”