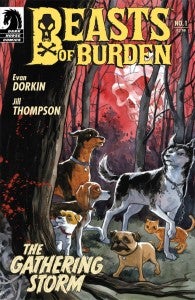 It may be overshadowed a bit by DC Entertainment's new TV spot for Before Watchmen, but Evan Dorkin and Jill Thompson's Beasts of Burden, the critically-acclaimed comic series published by Dark Horse here in the U.S., got a new trailer today courtesy of Delcourt, who are publishing a collected edition of the book in France.

With swelling music that highlights the book's beautiful watercolor art, the trailer almost seems like an ad for an upcoming animated feature--and it's one that I'd certainly watch.

The story of Beasts of Burden revolves around a small group of dogs and cats who investigate paranormal activity in their neighborhood (Burden Hill, hence the title).

"It's just good versus evil," Dorkin said of the book in an interview with ComicBook.com last month.

First appearing in 2003, the characters made their way thorugh a variety of Dark Horse one-shots before they landed in their own book.

"With Beasts of Burden Jill and I are dealing with an extended storyline, but it’s getting chopped up into all of these shorter chapters so I write every Beasts of Burden to work on its own as best as possible," Dorkin told us in May. That makes the collected edition your chance to read as many of those chopped-up chapters in one sitting as possible, to get a better sense for the story's whole.

Evan Dorkin and Jill Thompson's Beasts of Burden Gets a Trailer, Too