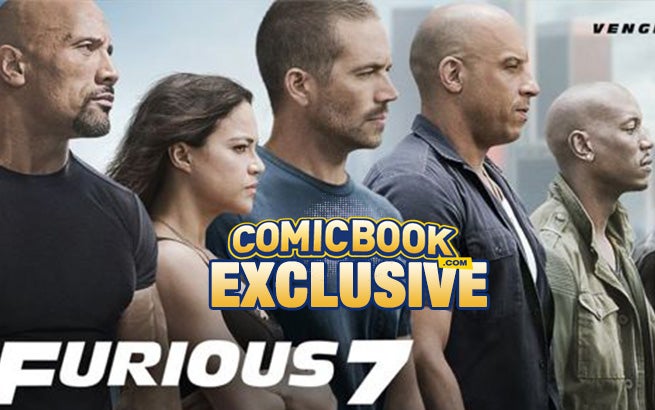 This weekend, Furious 7 races into theaters directed by James Wan. Wan is a quickly emerging talent as a director, following the momentum of his hit horror film The Conjuring and now joining one of the biggest franchise's in history. This week, Wan took part in an exclusive interview with ComicBook.com to talk about Furious 7.

CB: This was your first time working on the Fast & Furious franchise and you had to handle the weight of losing Paul Walker. How did you manage to rally yourself and rally everyone else involved to push forward and give Paul the proper tribute and legacy?

JW: Emotionally, it was very hard for all of us. It was very very difficult to try and push forward with it all. But, you know, the fact that we all loved Paul so much and so dearly and how much he meant to all of us meant that our main mission going forward was to craft a movie that would be fitting for Paul. One that truly honors his legacy. It became very clear half way into the movie when all this happened and we realized we had to move forward with it, that the second half of the film became a different kind of film. Story wise and direction wise, we were heading in the direction of where we're going, and the inspiration took on a different direction.

I can only imagine what it was like to be on that set. I was fighting back tears and I've never met Paul myself. With the song that played and the tribute... Was the compilation of Vin and Paul your idea?

That compilation was a collective thing. We all felt like we wanted to say something about how Paul has been throughout this franchise. We wanted to remind people how far back he started with this crew, with all these actors. I think going back and showing you how he, and Jordana, and Vin were back in the first movie just hit it really hard. Credit to Chris Morgan for writing such a beautiful monologue for Vin, as well, as his parting goodbye monologue. My job as a director is moving forward with and to execute it the most graceful way I could. To find all the right shots and all the right takes, edit it the right way, and make sure the timing of the cuts fit the music. It's such an emotional moment. I guess this is where my love for the sentimental Spielberg in me comes to forefront. It gave me a really good reason to dig into that world.

You did a really great job. It was the perfect way to respect him and show the love that the cast, crew, and fans had for him.

You know how filmmaking is. It's just all over the map. Especially this film. This film was a very difficult one to schedule. Usually I like to make my movies from start to finish in chronological order. As a filmmaker it lets me be able to direct my actors and tell them where exactly they are and go with progression. This one was a monster. It was a beast to schedule. All the different actors have so many things going on. Dwayne had this and Vin had that. Their schedules were all over the map and it was so impossible and because of that we had to shoot so many things and so much of the film was out of order. In retrospect, I think that ended up helping us, because I could shoot a lot of Paul's stuff that was spread out throughout the movie. When we needed to fill in the gaps, we came in and filled in the gaps here and there. That doesn't mean that the gaps were not big things. There was still lots of stuff we had to shoot, still pretty big stuff, and dialogue sequences, as well.

Whatever wasn't Paul, it was very hard to tell. There was no part that I could say with 100% certainty wasn't Paul.

One of the most talked about parts from the trailers and the people who has seen the film, is Dwayne Johnson hitting Jason Statham with his signature WWE move, The Rock Bottom! Who's idea was that?

That has go to Mr. Dwayne Johnson himself. Dwayne wanted to bring one of his trademark wrestling moves into that sequence and I welcomed it. I thought, you know what, if this is a big moment for Dwayne, I really want to shoot it in a way that really emphasizes it. So, when that moment came the camera spun and it just takes the audience right into it.

Yeah, it felt like you were riding with it.

Yeah, exactly. That was the whole point. I really wanted my camera to put the audience into the fight and into all the action and stuff. I think that's important because I generally find action movies... Action films you just get to watch as a spectator from really far away. I don't want that, I want to put you inside the aquarium. I want you to be swimming with the sharks and all the fish.

Sure. Hey, speaking of Vin Diesel and Dwayne having other projects... We love our comic books here. Did Vin Diesel ever once say "I am Groot" on set?"

You know what? I don't remember him saying that. It would have been amazing for him if he said that. I should have asked him to do it for me, it would've been amazing!

So, Vin thinks Furious 7 deserves a Best Picture award. I don't want to make you toot your own horn, but if you want to, you go ahead!

Dude, I am the last person to toot my own horn. I am not that guy. You know, I think what Vin is getting at is that he's very proud of the film and what we had to go through to actually finish the movie and have a movie that in his eyes is Oscar worth. I understand where it's coming from.

Sure, I can only imagine how emotional of a project it is for him and everyone involved.

So, Vin was on Jimmy Kimmel this week and he hinted that Kurt Russell's character was brought into the franchise for a story in a future film. Is that true?

Are you asking me is there going to be an eighth movie? I usually answer that with, "Is there oxygen?" I think, yeah. Usually I don't need to answer that particular question.

If there is, would you want to stay on board?

I have my next movie lined up but I am totally open to anything at this point.

Is the next one Conjuring 2?

Congratulations. I do hear whispers that you might be in talks for a DC or Warner Brothers movie. Is that true?

There's lots of talks about lots of things so who know what is true.

Would you want to direct Dwayne Johnson again in Shazam?

Well, put it this way: I freakin' love Dwayne. He's an awesome guy and I would love to work with him again in a heartbeat. I know Dwayne wants to find something for me and him to do again in the future.

If the franchise does continue, do you think the it's possible to top the outrageous, crazy stunts we've seen escalating from Fast 5, Fast 6, and Furious 7?

I think the only way to sort of pump people's expectation with the next one is to not go bigger, but maybe go more intimate. Maybe go more gritty. I think that will just completely undermine everyone's expectation and take people by surprise and I think that's what this franchise has done so well. Just constantly surprising people with what they're gonna do and I think that if they're smart about it, they will go the opposite way and do something very different.

Would you like to see Wan direct future Fast & Furious movies? How about DC's Shazam?

Furious 7 is now playing in theaters. We're also giving away Furious 7 prize packs, one each day next week! You can enter right here.