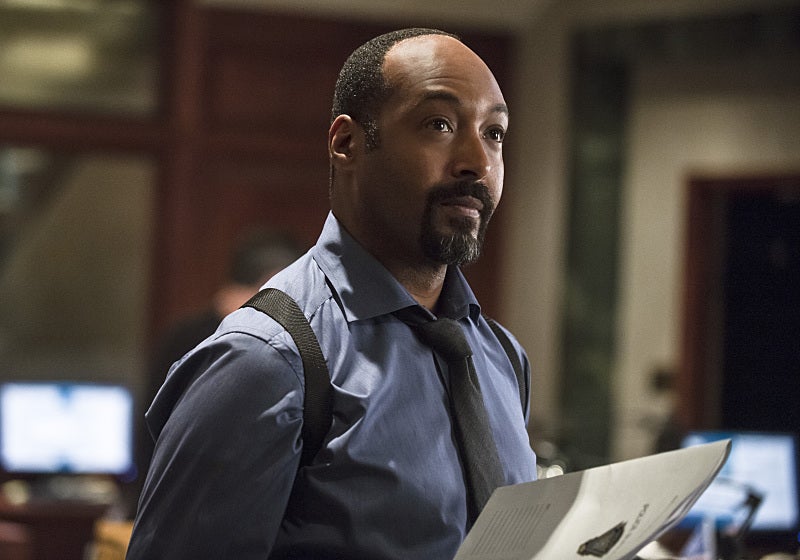 Stage and screen veteran Jesse L. Martin, best known for his turns in Rent and Law & Order, told us in a recent interview that he doesn't read The Flash comics.

Often, that doesn't come off well with the fans, but in the case of the man who plays Detective Joe West, he's got a pretty good reason: he wants to be as surprised and awestruck by the amazing things happening around him as his character is.

Martin took a break from shooting on the midseason finale over the weekend and spoke to us via phone. What's next for the Fastest Man Alive's father figure? Well, every week is Joe's week... 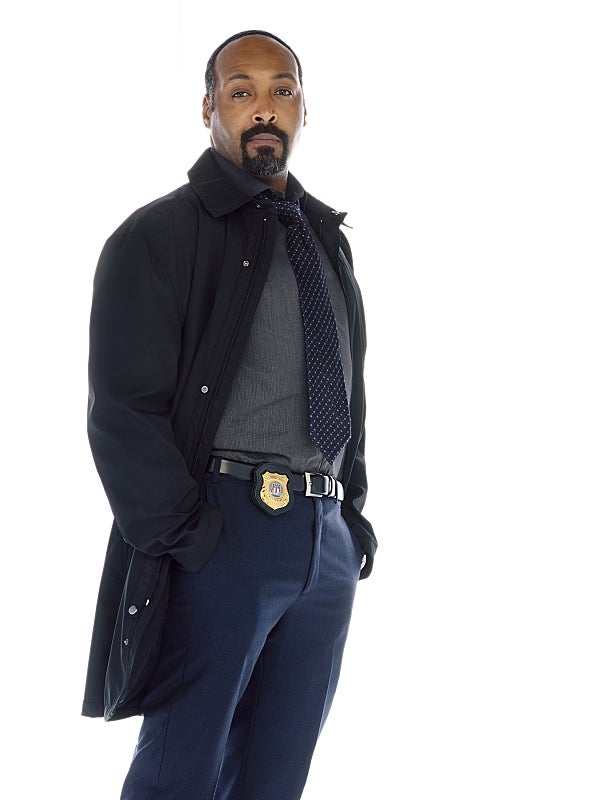 It looks like once the Live +7 ratings are in, the premiere is going to be one of the biggest shows ever on The CW. How does that impact you guys on set?

Talking to some of your castmates, I know that a lot of the younger folks look up to you. How's it feel to step into a role where you're playing everybody's father figure, and in real life the chemistry reflects that a little?

It's flattering, it really is. It's funny because they help me in many ways, too. I watch them and their enthusiasm and you can't help but let it rub off on you. And so you get excited in a way that normally I wouldn't get excited. I'm a little bit older than them and I usually keep it calm, cool and collected -- but I get geeked just like they do, now. Particularly when really cool things happen; we've seen so many cool things happen so far. You see these new characters pop up and what they look like and what they can do. I get really geeked out, I'm like a 7-year-old kid all of a sudden.

I end up learning a lot from them, just as good as they know from me, but it does feel good to know that they respect me and they trust my word. That feels great; it's really flattering. 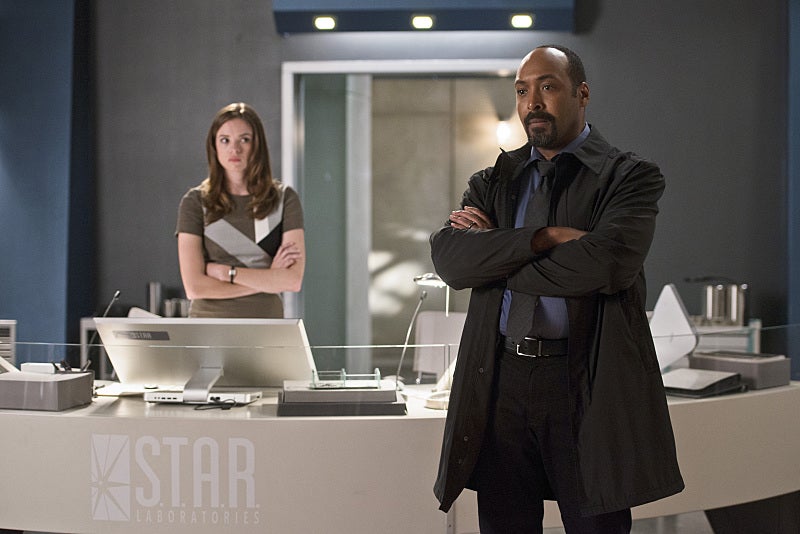 Does having your character know Grant's secret identity add a layer of complexity to your relationship that you wouldn't have expected in a superhero show?

Of course. I'm not Barry's biological father, but I am his dad, if you will. The fact that he's suddenly got this amazing ability, and he's working very closely with Harrison Wells and the S.T.A.R. Labs crew, and they become this sort of vigilante crew where they go out and they fight crime, if you will, it worries me.

It's a whole new layer of worry. Barry's putting himself in extreme danger on a regular basis and I don't want to see anything bad happen to my boy, so it adds an element of real worry. I'm constantly checking in. I spend a lot of time at S.T.A.R. Labs, just kind of making sure things are okay.

Yeah, it gives me a whole lot to do. I have a relationship with everybody on the show so it makes it interesting for me. It keeps me busy, so I absolutely love it and I'm glad that they wrote it that way. Otherwise I'd just be a detective and I'd be in the dark just like Eddie Thawne. I'd be standing around wondering what's going on, and that's not that much fun to play. I get to do everything in this case.

Do you think, too, that having him know the secret avoids diminishing the character?

Yeah, exactly. It's great. Now that I know, there's a whole element of what I've got to do, how I've got to prepare myself as a detective, as a father, as a man. There's so many things I have to do now to gird myself of what's coming because I'm well aware now that there's these metahumans that keep popping up. Some of them are good, but most of them are bad.

Obviously, you've got a lot less source material than most to work with. Do you find that makes it easier or harder for you as an actor?

It makes it easier. A lot easier, because we can create what it is. And we've got good writers so they know how to put together a character and they've done very well by Joe so far.

Look, I don't read the source material anyway because as far as I'm concerned, Joe doesn't need to know that much. I think Joe learns what's coming the same way the audience does, by when it happens. If I know too much, I won't be surprised by what I see and I won't be in awe. Because I think Joe is always in awe of what he sees when it comes to these metahumans and what people can do. He's always in awe of it, so the less I know, the better. 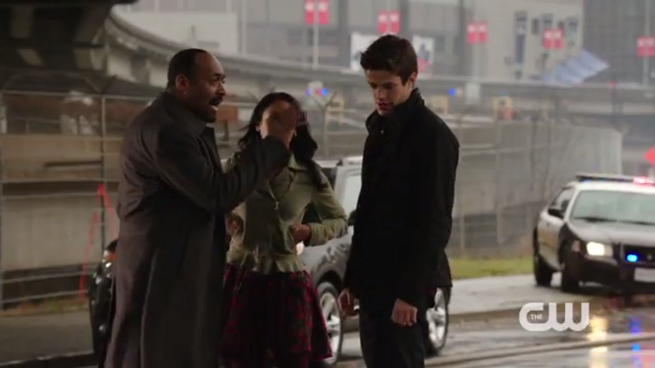 Do you feel like you bring a little bit of a different tone to the show? You really took it to the darkest, harshest place of the pilot with telling Barry how it was.

Sure. I didn't see it as dark, I saw it as, you have to be real. We're dealing with real things on the show, it's not just fantasy. There's real relationships, there's real father/son things going, there's the real things that need to be said and a lot of times they come out of my mouth. So yeah, I guess I am the guy that has to bring the pain, if you will. [Laughs] I have to be the heavy.

What's the thing that you've been the most kind of awestruck by so far?

It mostly has to do with the supervillains -- how they're mocked up, how their powers manifest on the show. The Mist and Captain Cold and Plastique, the things that they can do and even just what they look like is kind of remarkable to me. Those are things where I look at them and I go, "Wow. This is a cool show. This is a lot of fun to do."

They look amazing, they do amazing things, the special effects surrounding them are incredible. What you saw in the pilot pales in comparison to what we're doing now. They're going all the way.

Do you think that being "the most comic book-y show ever made" gives you a lot to work with as the guy who's supposed to be awestruck?

Yeah, definitely. [Laughs] I mean, they really do, it's the most comic book-y ever and it gives me a lot to work with. I'm one of the only regular humans left on the show, it seems. So we're constantly amazed by what we can do and see.

When I look back at your body of work, most of it you wouldn't be contending with people hassling you guys for set photos. Now you've got all these shots of you and Grant smiling and waving at paparazzi. Is that weird to get used to?

Is there an episode coming up that you feel was THE Joe episode?

They're all the Joe episode as far as I'm concerned! [Laughs] I can't really pick out one in particular. I get to do some really cool stuff in almost all of them, so you'll just have to keep watching.

Exclusive: Jesse L. Martin Talks The Flash: "Wow, This is a Cool Show"