Convergence may be over, but DC Comics' biggest event of the year is just on the horizon. Darkseid War, the upcoming Justice League epic by Geoff Johns and Jason Fabok, pits the DC Universe's most titanic villains--Darkseid and The Anti-Monitor--against each other for a multiverse-shaking story. Johns, who's written Justice League since the title's relaunch in 2011, has built to this moment since his very-first arc. As his numerous seeds finally come to fruition, he's taking readers on an adventure to the scale of Crisis on Infinite Earths.

Which is why he's bringing A-list artist Jason Fabok for the ride. Together, the duo promise one of the most exhilarating stories to hit DC comics in years. Below, the creative team talked with us about their artistic process, the unique relationship between Batman and Flash, and the new characters to grace Darkseid War. Plus! An exclusive first look at the cover to Justice League #44! 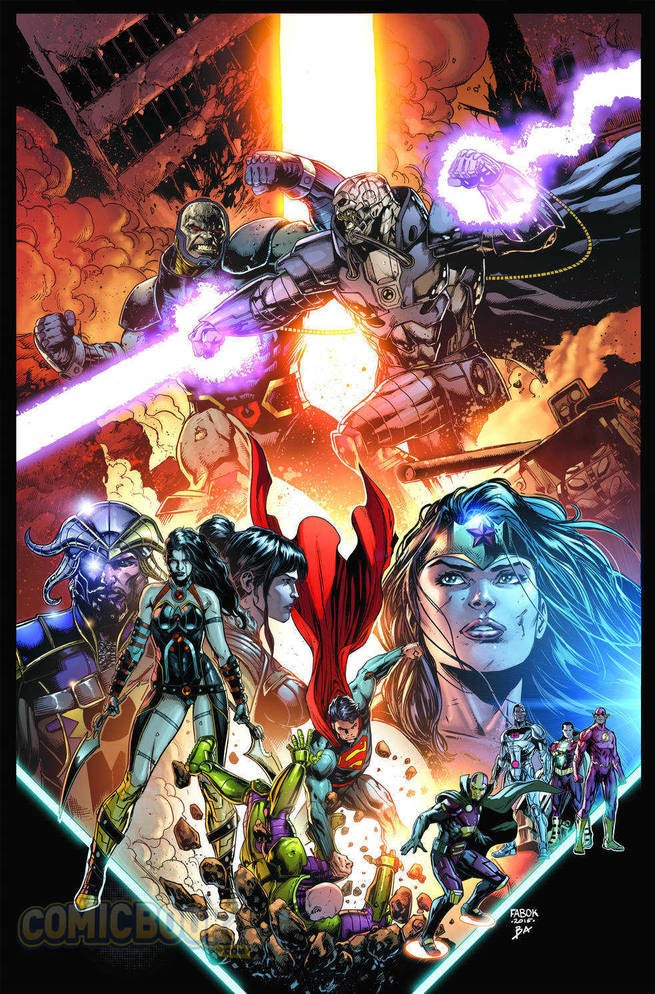 Geoff, what's it like having a breather with Convergence before jumping back into Justice League and going from 0 to 60 by re-introducing Darkseid AND the Anti-Monitor?

Geoff: Well, from mine and Jay's [Fabok] point of view we didn't really have a break. [Laughs]

We kept working. Our perception is a little bit different from the people reading it. We jumped right from 39 into 40 and then into 41. We took advantage of the time we had to complete this issue, and we really wanted to make it special by putting everything we had into it. That's why issue #41 is actually two issues in one, it's 40 pages long. I think the story warrants that kind of scope.

Not to mention the artwork that Jay is doing for this storyline is pretty unbelievable. He's come into his own so quickly on this book and people have noticed it. If people strayed away from the book for a couple months, we really wanted them to come back to something big. Hopefully, issue #41 will really excite people while kicking off our storyline in a way that's big and deserving of our characters. It's a beautiful looking book. So, if anything, we just took the time to make it's the best possible book we could make it. Again, it wasn't so much a coming back to as it was upping our game.

Given how long you've lived with these characters, and the time you've spent writing them in their current incarnations - has your approach to their relationships changed as you've learned more about them? For example, since I had the chance to read the issue, there is a fantastic back and forth with The Flash and Batman - would you have executed that differently say, a year ago?

Geoff: It's funny--At a crime scene, for me, I assume that Bruce and Barry have had this dialogue a ton of times. I think Bruce really enjoys it, because Barry's speaking his language and he gets stuff done incredible quickly. Plus, he's a really smart guy. So I think that when they're at a crime scene like this, or when they're investigating something, it just felt very natural that these two would collaborate in a very efficient and fun way. Clearly they've done it before, and Barry is almost a step ahead of Bruce, but not entirely.

Bruce already knows what Barry's up to, and he's already assuming requests that he's going to make and that they're going to talk about. Diana makes a really smart observation in that. They don't have their egos; they're just getting the job done. I do think that they have conversations about forensic scientists & criminal scientists every once in a while. When they're at a crime scene for a murder or a cosmic disturbance, they probably get in the sci-fi or science chatter every once in a while. I just assume those two characters would gravitate together during a crime scene. To me, it's very organic. It's just a fun bit.

Jason, now that you've warmed up with the Justice League characters during the "Amazo Virus," how comfortable are you fitting them all onto the page? One of the things I love most about the League is that everyone looks so different and distinct. Does that make it easier for you? Do you have a favorite?

Jason: Yeah. With the main Justice League, when we were doing the "Amazo Virus," I came into that book a little scared, because I hadn't touched Superman and I hadn't touched The Flash yet. I mean, I drew Superman once or twice in the past but I never had drawn the Flash or Green Lantern, or even Wonder Woman. I only did a couple of little sketches of her when I was doing my portfolios years ago. Coming into that was daunting, and having to draw all these characters while trying to find my version of the them was tough! It took me those four issues of the "Amazo Virus" to figure all that out.

Working on Batman before for 2 1/2 to 3 years, I had drawn him a bunch of times and I slowly evolved the way I drew him, as well. But immediately, I felt that I was attracted to drawing Wonder Woman. I felt like I understood the character artistically and I feel very confident in drawing her. As I've mentioned in other interviews, that sort of helped to spawn the story moving towards Wonder Woman as a focus from both Geoff's side and from my side as well.

Lex Luthor is another character that really surprised me. I really had no interest in Lex Luthor until Forever Evil, and then I really started to love this character. I loved the way he looked and I really gravitated towards him. He's a lot of fun to drawn mostly because he's different. His armor's different--Sometimes drawing a muscular body is a lot of work, you know? But drawing somebody in armor, you can be a little bit more loose in the shininess of the armor. It's really cool.

And then I have to say, the two new characters in #41, Mr. Miracle and Grail, those two characters were a lot of fun to draw, mostly because I got redesign one and fully design the other. Whenever you get a chance to do that, it really just helps you connect with the character and want to go really deep with them. There's something special about drawing those characters on a page. Some surprises like that have come up as I've gone through it, but I have fun drawing every single character. It's always a lot of work to draw those scenes where they're all standing in a room together, but in the end it always looks so cool when Brad Anderson puts those colors on there. It's so bright and vibrant and you know, just brings it all together. You realize you're drawing something really special. You're drawing these legendary characters that you loved to draw as a little boy. There's always just a magic to it.

Speaking of Mr. Miracle - this issue involves Mother Boxes quite a bit. Geoff when you're writing scenes with them, and Jason when you're drawing it out, what does the "boom" of a Mother Box sound like to you? Is it like that booming gong noise we hear in movie trailers all the time?

Geoff: Jason was very specific in how he wanted it to look. And I said, "I think it just looks awesome." I think it's overwhelming and deafening and I think that's what Jason made. Even tiny little panels, you feel it. There are a lot of tiny little panels in there where the Boom Tubes are summoned, and it just feels so big.

Jason: I have to say that, at first I was kind of like, "How the heck do you draw this?" I looked back at a lot of different artist who have done Boom Tube kind of stuff and I was never happy. I never found somebody who literally did it in such an amazing way. I kind of like how Jim Lee did it in Justice League but I also like how Mike Mignola did it in Cosmic Odyssey. In Cosmic Odyssey there are these big bold blacked out panels, but you can see the artwork through the letters. That's how I pictured the boom. So, at first it was lettered differently and I suggested that and it totally takes all of those shots to a different level. I really felt from just from that lettering it took it to a new level.

Geoff: It changed it. It completely changed it. You underestimate how important lettering is and I think people don't realize it's an art form, too. Rob Lee is an amazing letterer. Unbelievable.

So Geoff, the start of every big new story arc has the opportunity to bring a lot of new fans. With the spotlight on the DC Universe brighter than ever with shows like The Flash, Arrow and movies like Batman V Superman and Suicide Squad on the horizon, how do you go about ensuring that the voices and the characters are evenly balanced for someone coming into this fresh or not necessarily coming in from comics?

Geoff: I just find something about the story that has accessibility to it even despite there being so many characters. But there's a reason we spend so much time on Mr. Miracle or some of these new guys because most people don't know them or a lot of people don't know them. But you know Lex Luthor and Superman and I try and cover everything as best I can. We don't want to be boring for the people that have been around for 40 issues but at the same time I try and craft a story that you can just dive into. And you certainly can pick up Amazo Virus, Throne of Atlantis, a lot of these storylines, I feel with the bigger characters in particular have to be as successful as possible but it's a big story so it's a balance. I just try and do my best.

Before I let you both go, what are you the most excited to see the fans react to in Justice League #41?

Jason: Yeah, I would say the same thing. I would say that you know, Geoff's got a whole lot of great twists and turns and surprises coming in this book and by the end people are going to be very surprised at how all of this turns out in the end. It's going to be a great adventure to go on.

What do you think ComicBook.com readers? Are you excited to see the next chapter of Geoff Johns & Jason Fabok's Justice League hit store shelves? Let us know in the comments below!