Anything can happen in comics, including guest appearances by your favorite celebrities and comic creators. Tomorrow, such a thing happens in Deadpool #40, guest starring comedian Sarah Silverman, writers Jason Aaron & Jason Latour. In the special issue being brought to readers by the Roxxon Corporation, the trio stand against the evil company and it's questionable business practices. We sat down with one of the writers of the issue, Gerry Duggan, about the story...and his love for licensed comics. 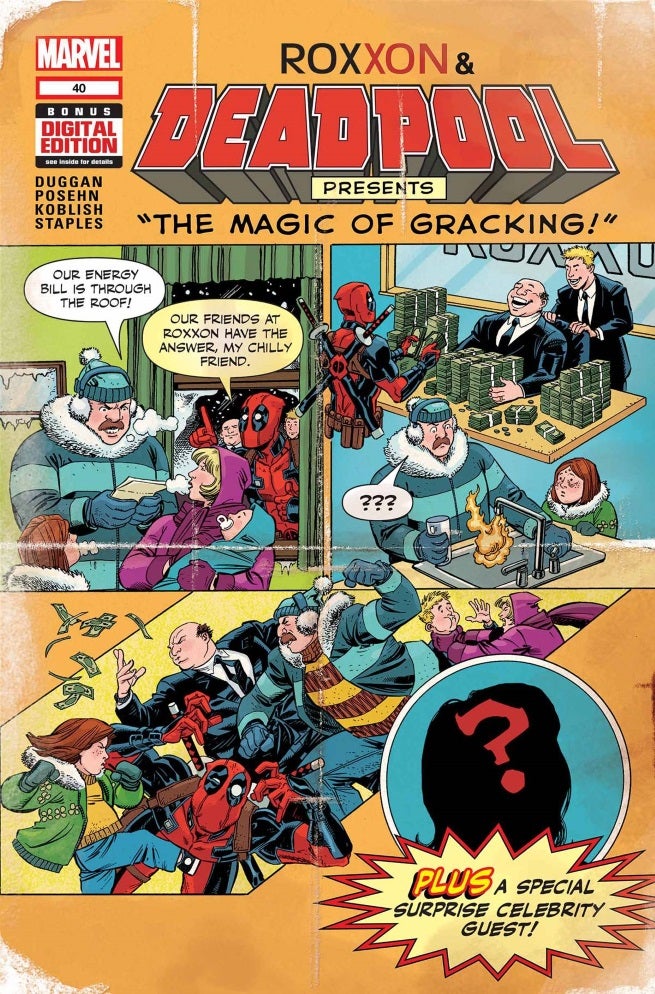 I have to ask, how does something like this comes together I know you all are friends, but could this have been a moment where the issue dropped and you were like “SURPRISE!”

Oh no, we didn’t want to surprise her. She’s always up for fun and we thought this would be a way for her to do something and appear somewhere where she hasn’t before. She won an Emmy this year and is doing movies along with her stand-up. But now she can say she conquered comics. You know, it sort of came out of it being a fun gag but then also sort of including a voice who already politically active. I mean we had another name in the running, but since we know Sarah we thought it’d be fun to not have to cut through the red tape.

Somewhere along the way, when we got into figuring out what our most crazy story yet was we knew we wanted to include Roxxon because of all the nation building Jason Aaron had been doing in Thor. So, we dropped him a line asking if we could borrow him. He obliged and was excited, but I responded and said “No, I want to use YOU.” That's how he and Jason Latour ended up in the issue.

You & Brian are clearly having fun with these inventory issues of Deadpool. How far out do you guys plan these?

The real answer is that it goes all the way back to before Brian and I were writing comics. He and I have this shared enthusiasm for old promotional tie-in comics. I have a serious collection of these. Everything from "X-Men & Western Leather Boots at the Texas State Fair," to "Spider-Man & AIM Fighting Cavities & The Green Goblin." Those Marvel Hero + Social Issue Or Promotional Tie In are just comics you don’t see anymore. I simply wanted to have fun with that.

Anyway, Brian and I would compare our finds at shows, and then became known as the guys looking for them. Now our collection does our work for us as dealers hold stuff back for us. These issues are a great stage for comedy to have Roxxon be paying to produce a “pro-fracking” comic book. It doesnt go as plan obviously, but the fun of it was to see Scott & Val ape that old look. I also have to give a lot of credit to our editor Jordan D. White who suggested we do the whole thing colored by crayon, and not just the two activity pages.

I think we’re getting a lot of mileage out of these inventory issues. The best ones we’ve done have a thread that connect to the next story we’re doing. For example, Roxxon is going to play a major part in the final few issues of the run.

Is Gracking something close to Sarah’s heart?

Look, she’s environmentally aware and her heart is in a good place, but the truth is - its more me than anything. My grandfather was an architect working on the New York City Reservoir who lived and worked in the Catskills. So I’ve always been conscious of the water table which was also a thread we had my old work with Phil Noto.

I do believe Water is a moral issue. We can’t exist without it. Just because someone can make a quick buck off it doesn’t mean it’s right. The return of money just isn’t there when it comes to Fracking, but theres a ton of money to be made convincing people to do so.

In the end though, there's no way I can make a Deadpool comic without being funny, so at the very least we’re bringing to light something that people might not know about. I also like that the story has threads picked up on what Jason Aaron was doing in Thor, so it’s nice to tie into that.

We had fun at the problem, we had fun at the aggressors, and we also had fun with the opposition. I’m proud of that. We even take a jab or two at the environmentalists. In the end it feels like a Deadpool comic, even if you come from a family of Frackers, you’ll enjoy the issues.

Now, those activity pages. In the script does it just say “Scott (Koblish) go crazy,” or did you come up with them?

I knew we wanted a word jumble and a crossword puzzle. Those were the hardest things I ever did. I did the legwork on all that and for the record, they all work. The craziest part about the comic is the maze. I’ll just simply say, if you try the maze, it’s not going to work. I told Scott, whatever you do, make it NOT work. I envision someone photocopying the page and trying to get out of it and just going bonkers. It’s a good gag.

Are there any no-prizes for those who finish the activities?

I would love it if Marvel brought those back. I have a buddy who won one. But yes, if you fill it out and bring it to a con, we’ll get you something. A free signature.

One last question, since you made headlines last week. Do you feel any moral remorse taking Deadpool off the board?

I’ve seen a ton of things speculated online. Some very funny, some super serious. Let me say right here, this is NOT an April Fools joke. He’s going to be as dead as a doornail when the book finishes. How it happens, it will be pleasing to fans of the book.

But it doesn’t mean they won’t still be mad at us. I’m not the Deadpool writer you deserve, I’m the one you need. 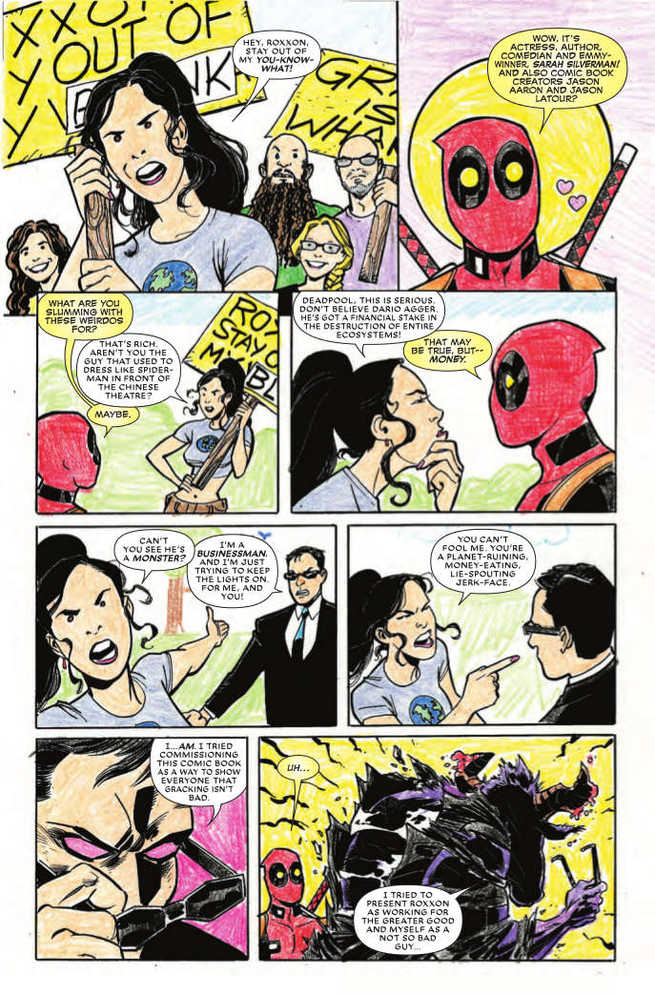 • The Roxxon Corporation brings us a special educational issue of Deadpool!
• Learn about GRACKING-the energy source of the future!
• Plus: a very special celebrity guest protest!
Parental Advisory