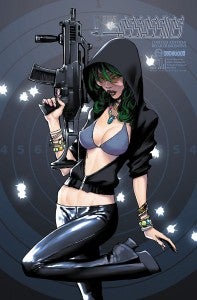 EXECUTIVE ASSISTANT: ASSASSINS #1 Vince Hernandez ¬ Writer / Jordan Gunderson ¬ Art / Teo Gonzalez - Colors Aspen's first-ever ongoing series begins right here! They are raised and trained to protect and serve their masters with discipline, loyalty and often violence if necessary‹they are the Executive Assistants. Yet, what tales of corruption and depravity, aggression and fatal destinies await them on each of their collective paths? Find out in this fresh jumping-on point showcasing new and deadly Executive Assistants each and every month! Kicking off this exciting debut release is the beginning of a three-part story, ³Life After Death², featuring the popular Executive Assistant, Lily, and her attempts to piece together a life after losing her master along with her allies. She will learn the price of freedom is often as costly‹and fatal‹as a life of servitude! EXECUTIVE ASSISTANT: ASSASSINS starts now!!! EXECUTIVE ASSISTANT: ASSASSINS #1 is in stores July 5th, 2012! [gallery link="file" order="DESC"]