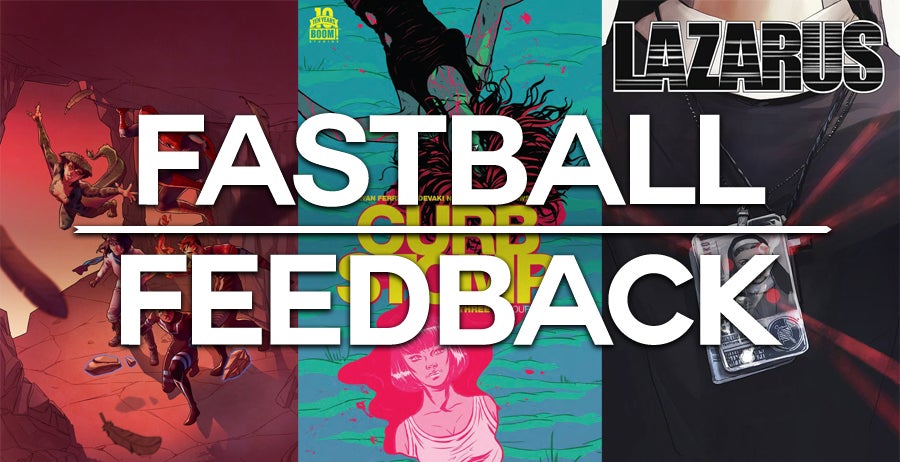 Welcome back to Fastball Feedback for the week of April 22, 2015. This week we're taking a look at three action packed titles from Image, Marvel and Boom Studios with Andrew Steinbeiser jumping into the fray to tackle Inhuman Special #1.

Lazarus #15 left readers with a hell of a big cliffhanger and Lazarus #16 is going to keep them hanging on. That's not a bad thing though. The newest issue in Rucka and Lark's post-apocalyptic epic provides another alternative perspective to that of Forever and the Carlyle family, and it's every bit as intriguing as the Barret family's story in "Lift".

This time the focus lies on Sister Bernard, a nun who travels across the different territories to provide aid to the waste of the world, while also acting as a Carlyle spy. The sister provides a fascinating alternative perspective, as someone with minimal power struggling to do the right thing in a world that leaves her with very little choices. Rucka delves into the conflicts that arise between her faith, moral compass, and the demands of power. Bernard undergoes an incredibly difficult journey over the course of these 24 pages. The real reward for readers comes from experiencing it with her both internally and externally. Rucka makes the internal dilemmas she faces feel every bit as important as the gunplay and spy-thrill that define the action.

Lark presentation of the tale is unlike any previous installment in the series. He moves between three distinct perspectives: his standard third person visual narration, physical documents, and the recordings of a camera. This juxtaposition of narrative choices allows Lazarus #16 to build the world as it tells Sister Bernard's story. It merges the rich history of the series (typically found in the back matter) into the narrative thrust of the issue. Documents within the story on tablet screens and laptop displays are created by Eric Trautmann and Owen Freeman, transforming the future world of Lazarus into a narrative device as well.

Lazarus #16 is another top-notch installment from one of the best series being published by Image Comics today. It combines both the intensely personal experience of Sister Bernard with the political exploration that defines Lazarus. Morality and ethics are being constantly questioned, but nothing about this issue feels like a lecture. Instead, this single-issue story is capable of challenging readers just as it thrills them.

While Loveness, a relative newcomer to comics, must also spotlight the Inhumans and All-New Captain America in the three-part "Inhuman Error" series of one-shots, its clear that he's most comfortable playing in Peter Parker's sandbox. And it's quite the castle that he's built in Inhuman Special #1, delivering one of the most satisfying takes on Peter Parker in recent (and maybe even longer) memory.

Inhuman Special #1 picks up where Amazing Spider-Man Special #1 left off, with Spider-Man joining Medusa and the citizens of New Attilan against a rogue sect of Inhumans. While the heroes' main conflict is serviceable enough, it's really just a vessel for Loveness' Spider-Man to attach itself to. Loveness' Spider-Man is humorous and inspirational, shuffling between quips that actually are actually funny, and pep-talks that reveal a genuine understanding of the "Great Responsibility" mantra. This issue doesn't sell itself as a Spider-Man comic, but it's certainly a lesson for Spider-Man done right.

It's just a shame that the rest of the cast can't keep pace. The main conflict between Red Raven and Medusa is serviceable superhero operatics, but fails to leave a lasting impression like the relationship between Spider-Man and the young Inhumans. Loveness at least creates a sympathetic villain of C-Lister Red Raven, who could have been ripped in-two by the Sentry as far a fandom was concerned. But here, Raven's motivations make sense. Like with the greatest of villains, Raven's motivations are fully justifiable, even if his actions are far from it. As his origin is refiltered through a compelling lens, it's just Medusa who lacks any real identity. With little more to do than trade blow with Red Raven, it sadly looks like the Inhuman Queen is taking the back seat in this adventure.

But at least those fisticuffs are brought to life by artist Ryan Lee. Straddling the line between gorgeous and grotesque, Lee's scratchy figures captivate in the most unconventional ways. It's like someone scrapped a series of graffiti murals of the street, and slapped them on the comics page. It's a perfect fit for the less-than-photogenic Inhumans.

Ultimately, Inhumans Special #1 achieves exactly what it sets out to do: Give a chance to let new creators prove their salt with Marvel's biggest franchises. Beyond a stellar understanding of Spider-Man, Loveness proves that he can juggle multiple threads and voices without losing the reader. Lee, meanwhile, poises himself for inclusion in discussions that may include names like Frank Quitely, Chris Burnham, and Ramon Villalobos. It's a shame that Lee can't join Loveness for the story's final act in All-New Captain America Special #1, but at least the two could make this chapter anything but an Inhuman Error.

Curb Stomp is every bit as tough of a series as it sounds. Ryan Ferrier and Devaki Neogi are not pulling any literal or metaphorical punches in this series about urban gang wars. The women who comprise The Fever have given just as good as they've got in these three issues, and they've gotten it pretty hard.

Neogi's style defines Curb Stomp and, hopefully, presents him a stage to break out into mainstream American comics. His art clearly descends from that of the Hernandez Brothers, pure of heart and unwilling to compromise. Characters are poised with nothing but the fullest intensity of their emotions and action. Whether its fisticuffs or heated conversation, it's impossible to ignore the heat or fury of every sequence. It's this passion that fills Curb Stomp #3 with its drive or power.

Ferrier is making every page of this four-issue mini-series count. His scripting does not spare any space as it packs rich characterization, a fast-paced story, and loads of action into each installment of Curb Stomp. For readers who are turned off by the decompression found in six and eight issue arcs of superhero comics, Ferrier's writing will be a welcome relief. Not only does he create a clear cast of characters and story arc here, but he is ready to bring it all to a definitive end. The story may be lacking in some nuance, but it packs a helluva punch.

Curb Stomp #3 is a penultimate issue that leaves no doubt that this series is ending. It lands angry, hard, and fast. Ferrier and Neogi aren't interested in providing relief or escape. They're sprinting to the finish line, and when this comic ends, there is no doubt that it will end. The violence and unrefined nerve of the series may not appeal to anyone, but it's pure in a way that most comics will never be.

New Report on the Edge vs. Judgement Day Storyline Heading Into WrestleMania 39 Season