There are certain concepts that work better on the printed page than they do in a live-action movie.

And that's alright, but one of the things that's unique to comics is that they've got this long history and a lot of readers who have been paying attention to them for decades. As a result, any little change is as likely as not to set somebody off and alienate your movie from the base.

What are some of the things that nobody's gotten right quite yet on the big screen?

There have been alternate timeline/alternate Earth stories that have done well onscreen--most notably the Back to the Future films. But generally speaking those alternate timelines are not built to last, and the concept of a multiverse never overtakes the possibility of our One True Universe or One True Timeline.

The J.J. Abrams Star Trek series is arguably the most comfortable with the concept of a multiverse existing--in that they kept the pre-Abrams Trek alive in a separate universe. Still, we'll probably never see anyone from that world again, excepting the Spock who traveled over at the moment of the new universe's intersection with the old--and the odds of anyone trying to tell a story that spans both or stars multiple characters from the two Earths appearing together are pretty long.

Superman proved that it can work, but ever since Tim Burton's Batman, nobody has really been willing to try it. That's because Burton's Batman didn't just "work," it looked cool, and that's likely to sell more toys.

There's a number of different variations on the theme; while most of The Avengers (except obviously Iron Man) have some kind of cloth costume, albeit highly stylized and not particularly close to their comic designs in many cases. DC tends to go with rubber and/or armor. That's the same thing the Spider-Man movies have done so far, and that seems to be the plan at Sony for the near future. Fox has generally gone with leather, both for the X-Men movies and also for Daredevil.

We know what you're saying: "But the Marvel Cinematic Universe is all connected!" True, but it's connected in a pretty shallow way. It's mostly just, "Hey, look! They exist in the same world!" And the occasional cameo or something. So far, we haven't had any movies that rely completely on your having seen previous Marvel movies. That isn't to say it's not possible, but in the comics, we have these multi-part crossover stories where you get no resolution until the very end, and the odds of them ever doing that--especially while Joss Whedon is around, complaining about The Empire Strikes Back.

Ultimately, that's probably not a bad thing. It's exciting to be teased into each next movie by Marvel Studios, but it's a whole other thing to feel obliged to watch movies you don't want to, just to make sure you "get" the ones that come after. 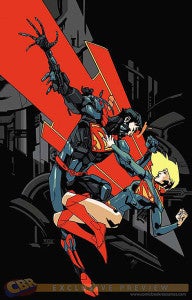 There's really only been a couple of these characters ever to make the big screen. Batgirl and Supergirl have both appeared once before--although only Supergirl ever got her own movie. Superboy had a TV series for a while, too, but that's a bit of a different animal since it's basically just "Superman when he was a boy."

We've never had any of those character who are so popular in comics for being obvious knock-offs make it to the screen yet, though; Apollo and Midnighter haven't, and likely won't anytime soon, and neither have characters like Supreme. If they did, viewers probably wouldn't say, "Oh, cool, they're playing with the conventions!' Viewers who haven't ever read one of those comics would likely just complain about how uninspired the whole thing feels.

Of course, we'll get things like Black Widow and Nick Fury appearing in whatever movies will have them--but the odds of The Hulk appearing for more than a cameo in an Iron Man or Thor movie are pretty long.

Why? Well, it's economics. In the comics, it doesn't cost anything to use a character you already own, since all you have to do is have the artist draw that character instead of someone else. In the movies, not only are you using an actor who has to be paid, and burning a movie off that person's long-term contract, but you're also kind of misallocating your IP. A popular, marketable character shouldn't be appearing in somebody else's movie to be a second fiddle for 20 minutes; they should be headlining their own film adaptation.