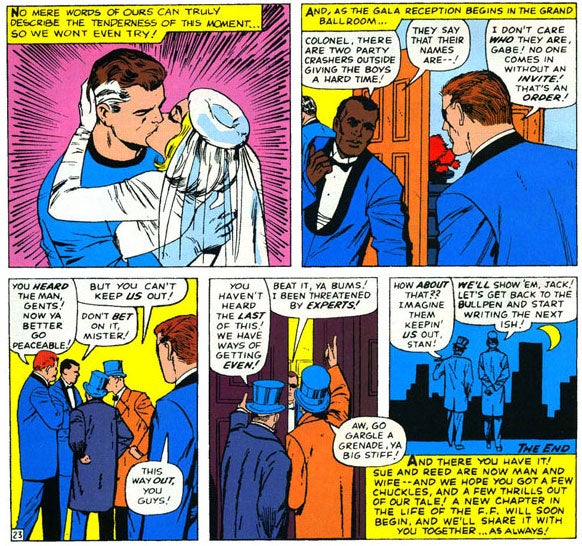 Since comics are a visual medium, it's easy and fun to put things into the background. And the fact that it isn't TV or the movies? Well, that means those things and people can be anything and anybody.

When we recently spotted Calvin and Hobbes in an old issue of X-Factor, we thought it could be fun to think about some of the oddest, most random and yet enjoyable little bits of background humor we've seen.

For the purposes of this piece, we're not claiming they're "the best," since this is the kind of thing that will hopefully yield a bunch of comments directing us to cameos that we didn't know existed or didn't consider.

We're also not considering things like weddings and other special occasions, where there are dozens of (explained) cameos and guest appearances. Or things like visits to "Earth Prime" or the Marvel editorial office.

And if the appearance advanced the plot -- like Jack Kirby as God in Fantastic Four or the like -- we discounted that, too. In fact, generally speaking, this particular list doesn't have anybody who said more than a line or two.

Here's ours. What are yours? 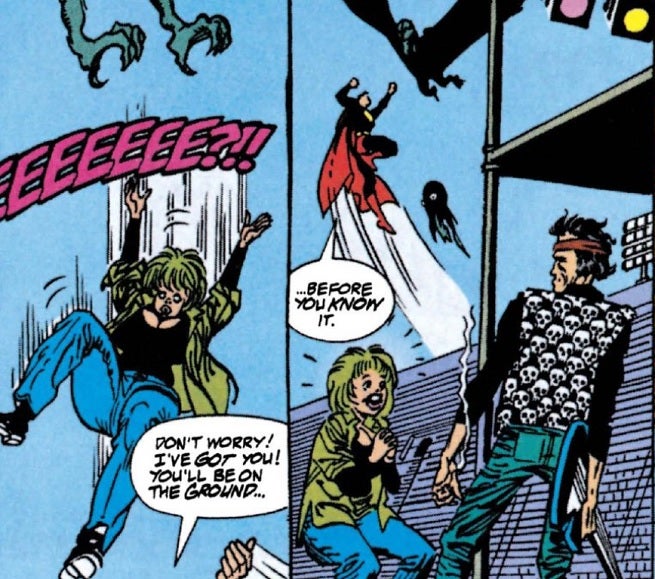 Keith Richards, lead guitarist for the Rolling Stones, appeared in a cameo in Superman: The Man of Steel #40, shortly after Superman returned from the dead in the '90s.

Superman had to save a concertgoer when a stadium where the band was warming up was attacked by a supervillain. He drops her safely...feet in front of Richards where she starts to babble at him.

While Keith and Mick got name drops, The Rolling Stones only appeared on a partially-obstructed sign. Since this took place during the Voodoo Lounge tour, they presumably couldn't actually the band outright, although the lip-and-tongue t-shirt elsewhere in the issue is a bit of a giveaway. Why not? Well, Marvel Comics actually made an official Rolling Stones: Voodoo Lounge comic.

This one has always stuck with me, so I wanted to make sure I added it to the list; it was the first time, as a teenager, I ever saw somebody draw a famous person into a random cameo just for fun, and at the time, I was obsessed with the Rolling Stones, so it was a treat.

Of course, finding it was the hardest one on the list by a long shot. I couldn't remember the exact issue and neither could either writer Louise Simonson or artist Jon Bogdanove. Luckily, their friend David Lewis Cullen, who had worked with Bogdanove on the title for a time, remembered the issue number and directed me to it on Facebook. Thanks to him!

Linkara is one of the producers on Channel Awesome, a series of websites that features humorous reviews of various pop culture content. Specifically, Linkara (real name Lewis Lovhaug) hosts a show called Atop the Fourth Wall, which recaps and reviews bad comic books.

One of his most frequently-requested brands is Sonic the Hedgehog, which he's done once, but he admits that he knows little about the property and the reviews themselves have been mixed as not all of the comics sent to him were actually all that bad. And somehow, that translated to Linkara -- Lovhaug's bespectacled, fedora-wearing character from Atop the Fourth Wall -- appearing as a background gag in Sonic Super Special #7.

He also recently appeared in Littlest Pet Shop from IDW, apparently because the writer and artist are fans of his show, and was sent a signed copy of the issue.

This one's odd in part because while a fair number of people in the comics community probably recognize Linkara, he's not a "real" celebrity, as he noted in a recent interview where he discussed the cameos among many other things. Most people on this list are far more recognizable than he is...but he scored two. 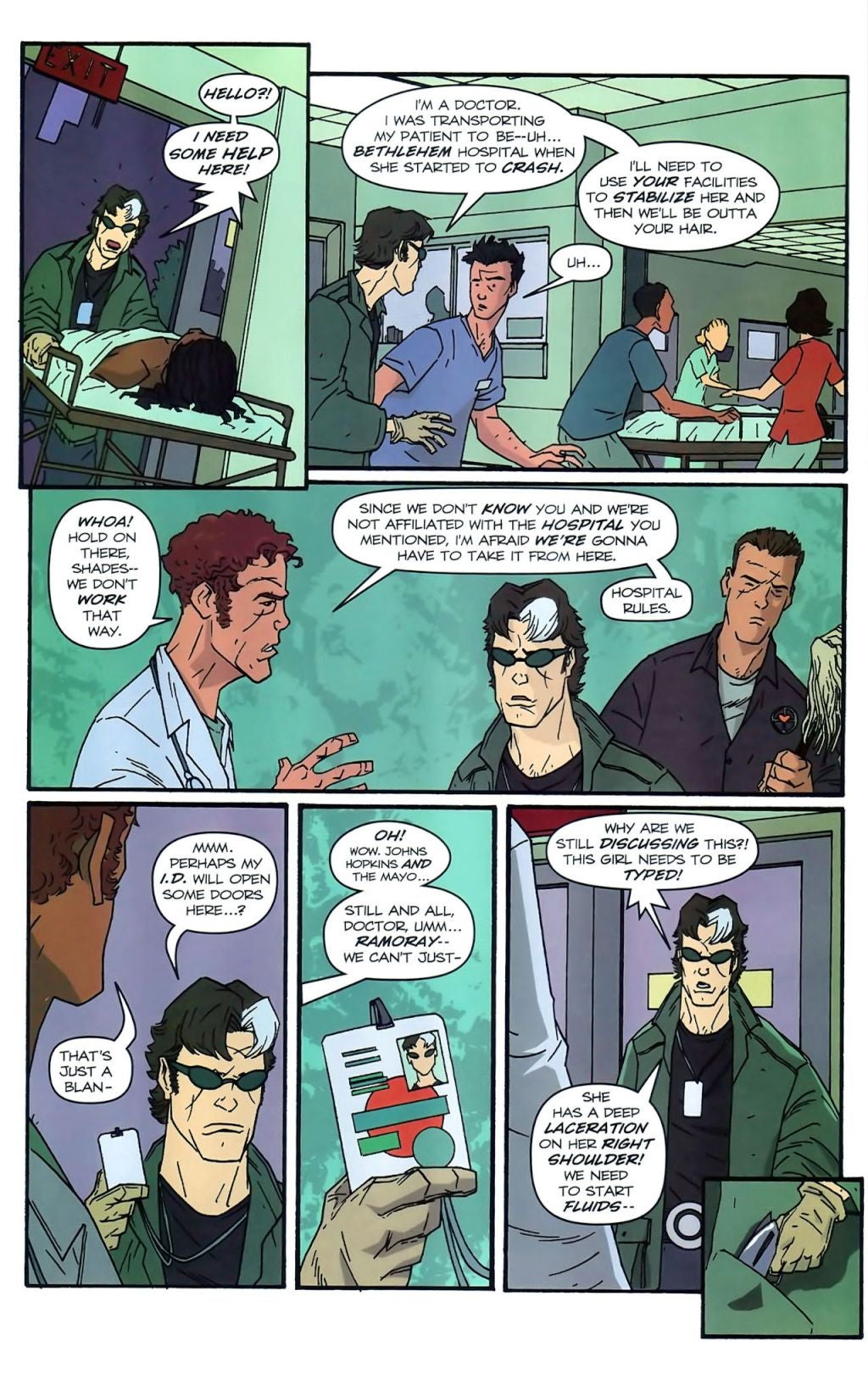 In the creator-owned series The Perhapanauts, a team of government operatives secretly deal with threats hidden to the rest of the world...by recruiting monsters and myths to take one another on. The primary team features a psychic, a ghost, a bigfoot and a chupacabra...and so as you can imagine, some of the stuff they come up against is pretty dangerous.

So it was that one of their members was badly injured in a battle with a chimera at one point, and taken to the hospital...

...Sacred Heart Hospital, apparently, as the medical staff taking care of her were quite obviously the cast of Scrubs.

And, in case you weren't 100% sure that was them? There's the nameless Janitor from the hit Bill Lawrence-created sitcom standing behind MG on the far right of the big, middle panel.

Full disclosure: I loved this bit so much I actually bought the piece of original art from Craig Rousseau and have it hanging over my desk as I write this. 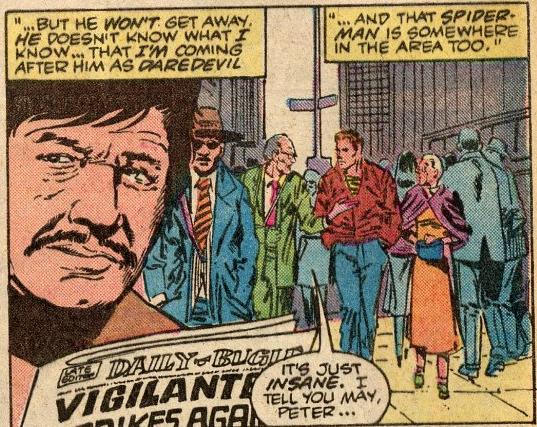 This one's justkinda...there. Charles Bronson in Peter David and Rich Buckler's Spectacular Spider-Man #108, reading a story in the paper that related to vigilantes -- something he's had a bit of experience depicting onscreen (hat tip to CSBG for this one). 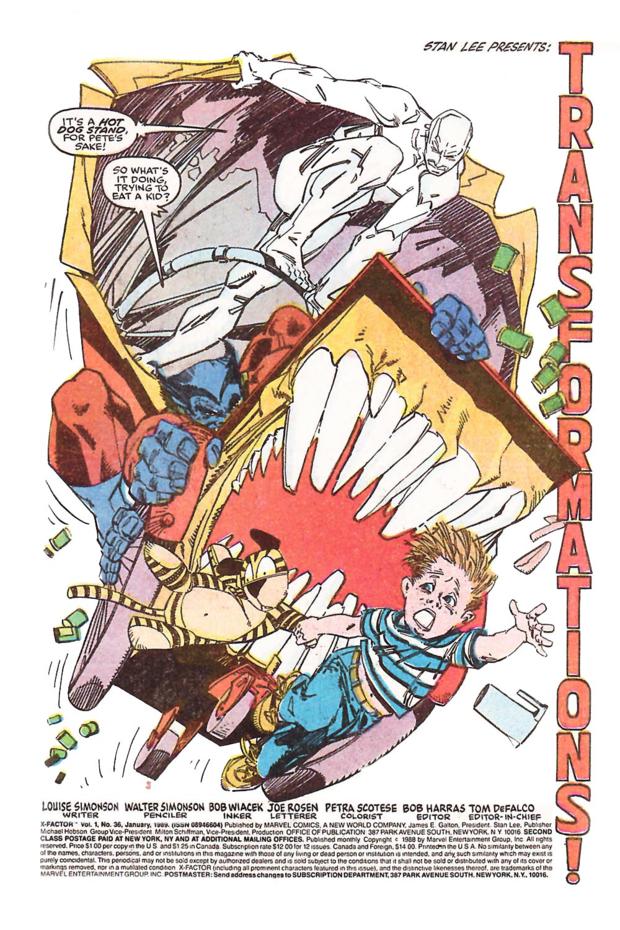 Walt Simonson put the lives of some of America's most beloved comic strip characters in a bizarre sort of peril in this issue of X-Factor. Seems like he was having some fun.

Five of the Wackiest Comics Cameos of All Time