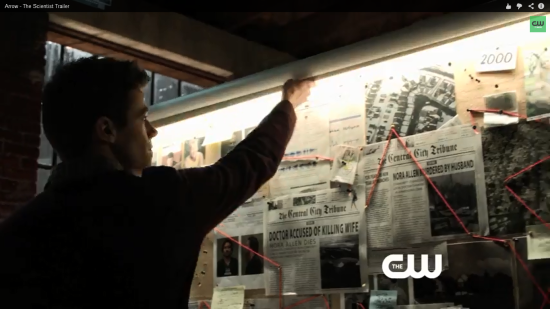 In a midseason wrap-up interview with Comic Book Resources, Arrow executive producer Andrew Kreisberg, who is on tap to showrun the upcoming pilot for The Flash starring Arrow guest-star Grant Gustin, assured fans that the series will be very much the character they know from the comics--and that the rest of the DC Universe is as open to them in The Flash as it is in Arrow.

"In the same way that Arrow was conducive to bringing on characters like Deadshot and the Huntress and some of the more grounded people, hopefully with The Flash there's a way to bring on some of the more fantastical characters, that will probably still go through the grounding lens with which we view everything," Kreisberg said. "But we could tackle some of the bigger villains, and possibly heroes. There's a hint of a major character in the pilot."

Of course, it's as likely as not that the major character in question is the Reverse-Flash, who was strongly hinted in the dialogue on Arrow. It would stand to reason that point--which is key to Barry's backstory--would be reiterated, although one would assume that Kreisberg here is talking about somebody who wasn't already established in the Arrowverse.

He added, though, "It's always important to remember -- like with Arrow, everybody wants Batman to come on and whatnot, but Arrow has to be the coolest person on Arrow. The same thing with The Flash -- Barry has to be the coolest person. If we're lucky enough to get to do more past the pilot, it'll really be about making sure that the audience loves The Flash, and Barry Allen, and Grant Gustin, as much as we do."

Flash Pilot To Hint At Another Major DC Comics Character