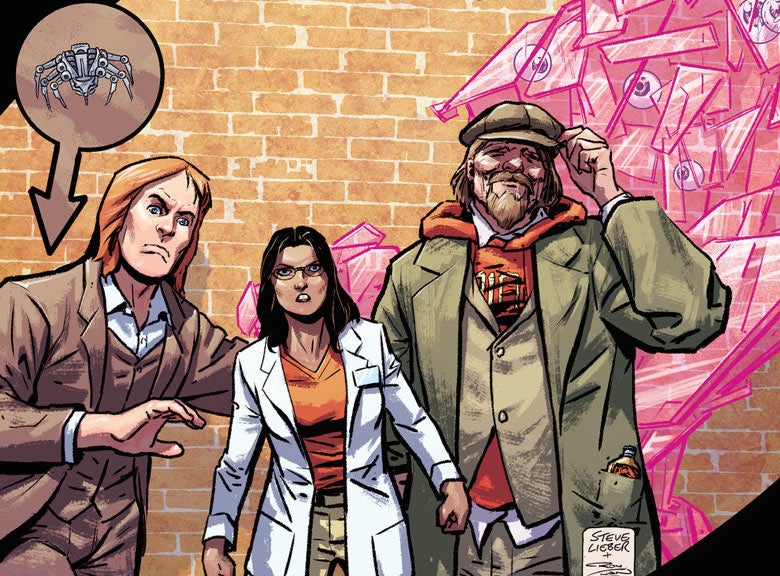 In a time traveling series like Ivar, Timewalker, making history is one thing. But breaking it? That's an entirely different ball game.

But plenty of big changes are in order for the Fred Van Lente-written series, which shifts gears for it's second arc, Breaking History, with May's issue #5. For the arc, the title will essentially switch over from a buddy book to an ensemble teamup. Though the Justice League this is not, as Ivar will recruit some of history's most delinquent teamates including his immortal brothers Armstrong and The Eternal Warrior, a sentient and wise-cracking Nanite from Bloodshot's bloodstream, and a diabolical Twitter star called The Lurker.

It's a despicable gang for sure, but a necessary one for the Valiant traveller's most ambitious plan yet: Saving his friend and traveling companion, Dr. Neela Sethi, from—herself. As Sethi is kidnapped by her future evil-self (that's time travel for you), Ivar and his motley crew are her only hope from unmaking history.

Below, Van Lente took the time to discuss the upcoming arc, the idea of a sentient Twitter feed, and what the future holds for Ivar once history is unbroken. Plus, Valiant provided ComicBook.com with loads of exclusive art and covers for the issue, which you can view in the gallery below.


The title of this newest arc is "Breaking History." What does breaking history mean, exactly, and how does Ivar's team get involved in it?
Changing history is an oxymoron, because if it's history then it's already happened. If you go back in time, in history, and kick Caesar in the groin, you've already kicked Cesaer in the groin. You're not going to change the force of anything. But one of the things that's revealed as arc onerous along, is that Neela has discovered a way around that, and ways to actually change history. And that is what Ivar has been trying to prevent all along, and what the Prometheans are trying to get their hands on. So, if Neela can perfect this method changing history, she will very much break history, and that's why Ivar and his brother, and Amelia Earharts and Lurker are doing this impossible break-in. They're going to "break into" time  to keep her from doing this.

Read Time Walker #4. I have to leave some things mysterious!

Fair enough. So who's been your favorite character to write in this eclectic line-up? Who are you having the most fun writing?

Of the break-out team, I really like the interaction between the three brothers (Ivar, Armstrong, and Gilad). I have a pretty healthy, friendly relationship with my sister, but I enjoy the idea of these three males who are hyper-males and hyper competitive, and are so radically different from each other. Gilad is very angry and self-righteous, and Ivar is very cerebral yet unpredictable and Armstrong is loud and sentimental and outspoken about his views. Sticking them together and just watching them go at it is hilarious. One of my favorite things I did for Valiant was Archer and Armstrong #0, which focused on the brother back in Ancient Samaria going on this adventures. It's fun to do that now, except with space ships, asteroid dry docks, and all the crazy stuff in this arc. 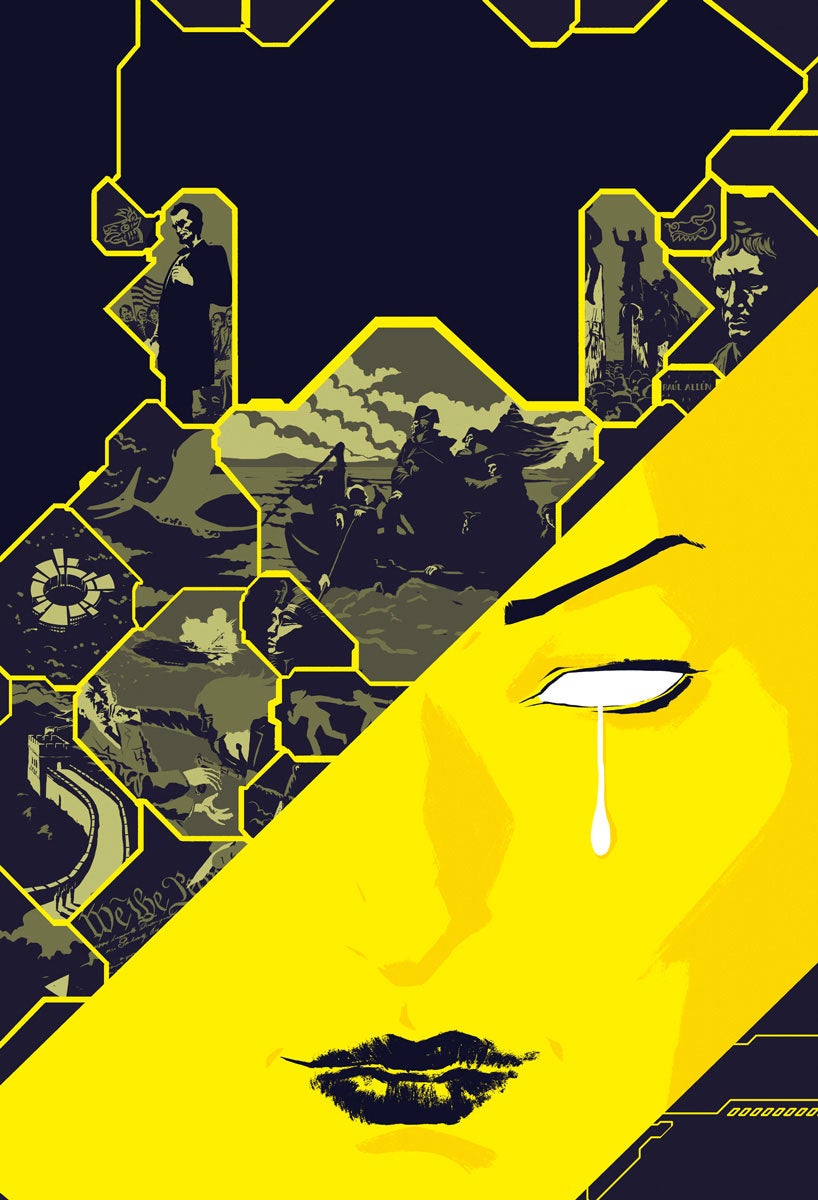 Both Ivar and Armstrong make for a pretty less-than-noble team-up. But, who out of the two brother's would you say is the most despicable?

Ivar's the most despicable. Armstrong can be a drunkard, but he's a lovable drunk. He's the type of guy who cries at the end of Disney movies. But Ivar, he's the one responsible for the deaths of millions, brought cataclysmic destruction at the beginning of time. He always carries something up his sleeve, and has an ulterior motive.

And where did the idea to come up with The Lurker come from? It's a very interesting concept.
The cool thing about time-travel books is that you're able to go back in time to the Roman Empire and dinosaur times, but there's all this future history that's there too. You obviously just can't look that up on Wikipedia, because it hasn't happened yet. So I was looking at different ways humanity might evolve and different forms society might take that were really out there, but based in things we recognize from today and could project into the future. So this idea that we wouldn't have individuals anymore, just Twitter feeds, walking around with legs, arms, and eyes, was really fun to me. And then I described this crazy character to Clayton Henry, and he did a fantastic job bringing him to life. When you first see him in Timewalker #2, you're like, "Woah!" He definitely makes an impression on you. So basically, I was just trying to imagine how humanity would look in the far future, and not have it just be more guys with a head, two arms, and two legs.

Very cool. And where did the idea of a sentient nanite from Bloodshot's bloodstream come from? Does the arc explain how a character like that comes into Ivar's story?

Well the nanite is actually an idea from the editorial department. I think it's a good idea, mind you, but I'm still figuring out how to fully integrate it into the story. I think that it has a very specific function, and if I tell you that, then I'll ruin the full story. But it's pretty awesome.

Well, is there anything you can tease about him?
Hmm. Well, the crazy thing about nanites is that they self-replicate. That's right, they literally screw themselves! But, that's a functionality that Ivar is going to take full-use of. 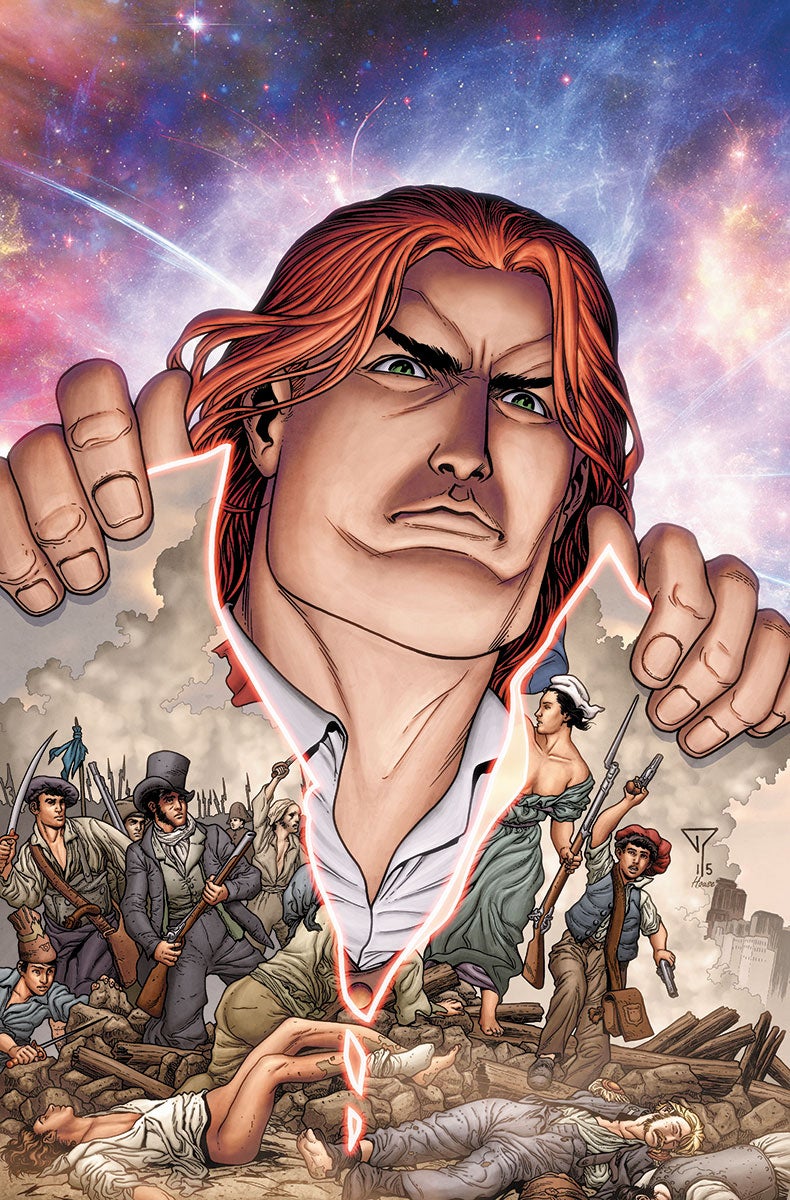 With this second arc, you're introducing an ensemble cast. This makes Timewalker less of a "buddy" book and more of a  team book. What's it like shifting gears from a smaller cast to a much larger one?

It would be more difficult if I weren't dealing with characters like Ivar and Eternal Warrior. I've been writing those characters already. If they were all brand0new characters, I'd probably be freaking out a bit, but it's more like hanging out with old friends. And that makes it really exciting, and not a challenge at all.

Cool. In this arc, you're working with Francis Portella. How's the collaboration going between you guys?

Francis is actually one of my all-time favorite collaborators. He did one of the first Marvel stories I wrote, which was Marvel Super Villain Team-Up: MODOK's 11, and we worked on Halo: Bloodline.  I basically begged Valiant to let me work with him. He's amazing. Almost all of this arc takes place in the future; and there's post-apocalyptic futures, and there's asteroid-belt civilization futures, and of course there's this place called Oblvi-One, which is this crazy place. And Francis is just perfect for that.

Fantastic. And how long is this story arc going to be?

And what are your long-term plans for Ivar and Dr. Sethi after this arc?

The third arc, or "act," is called "Ending History."

That definitely Sounds enticing. Is there anything else you want to mention? Anything in particular that you're excited for readers to see?
The reaction for the series has been great so far, so I just want to thank everyone for picking the book up. We're having so much fun doing this, and it's great to see people responding to it.

Fantastic. Before we go, I have one last, but fun question. If you had made Sethi's discovery to change history, and could alter it yourself, what's the one thing you'd go back in time to change?

Well, I'd probably go back in time to Crime Alley, and stop Joe Chill from shooting my parents. I just think about it every day, and think "If there's something I could do about it…" but then just pop open another beer.

Awesome, thanks for chatting.