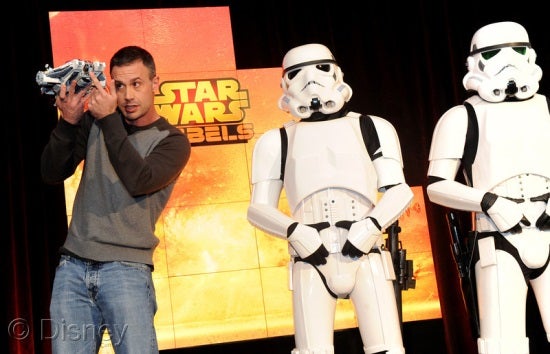 In one of a number of newly-released clips and interviews in support of Disney XD's Star Wars Rebels, series star Freddie Prinze, Jr. talks about the unique challenges of voice acting, saying that he has to draw on a different set of skills in animation than he would in traditional film acting to make his character Kanan "the coolest guy in the universe."

You can check out the full interview, in which Prinze talks about his approach to do doing so, below.

Set in the years between Star Wars Episode III and the original trilogy, Star Wars Rebels follows a group of rebels as they make their way in through the Galactic Empire, encountering familiar characters from both sides of the Force.

In this interview featurette, Star Wars Rebels' Freddie Prinze, Jr. discusses playing Kanan, the experience of voice acting, and why the animated series will appeal to Star Wars fans of all ages.

Prinze says, "I have so much fun doing it and getting to kill those lines that I loved as a kid watching Star Wars."

Star Wars Rebels' place in the timeline is exciting for Prinze, too. "It's definitely a show for everyone who loves that world," he says. "Just that time period they put us in is so rewarding for fans of this franchise. It puts you right where you want to be."

You can check out a conversation Prinze had with myself and other reporters at Comic Con International this summer here.

Freddie Prinze Jr. Is the Coolest Guy in the Universe In Star Wars Rebels