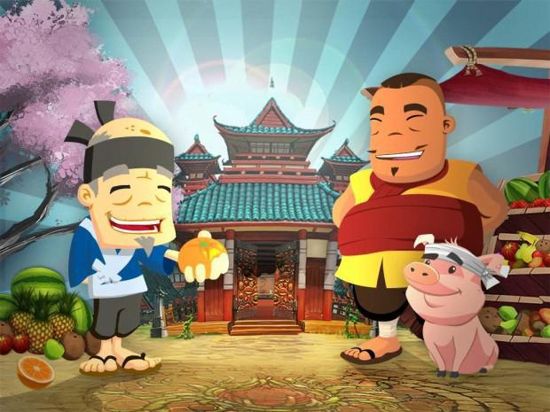 Earlier this week, Comicbook.com brought you the news about the Temple Run comic book based on the popular mobile game. Now, we have news of another popular mobile game making the leap to the printed (and digital) page. Ape Entertainment and Halfbrick Studios have announced a new licensing agreement to create a series of original digital comic books and graphic novels based on Fruit Ninja. The Fruit Ninja comic book series will tell the untold backstory of the juicy Fruit Ninja universe and its new colorful characters. The starring characters of Fruit Ninja are Sensei, Gutsu and Truffles. The Fruit Ninja game is currently available on iPhone, Android, Facebook, Xbox 360 Kinect and countless other digital platforms. "A key goal for Halfbrick is to bring our content to even more fans around the world," said Phil Larsen, who is Halfbrick's Chief Marketing Officer. "By expanding the Fruit Ninja universe with new stories, characters and adventures, Halfbrick and Ape Comics are free to explore an unlimited number of creative opportunities for comics and take the brand in even more exciting directions." Ape Entertainment will release the full-color Fruit Ninja comic book series digitally through a standalone Fruit Ninja comics app on the App Store as well as print versions in the coming months. "Fruit Ninja is a mobile masterwork and we're very excited to turn every slice of juiciness into a comic series fans will love," said David Hedgecock, who is CEO of Ape Entertainment.