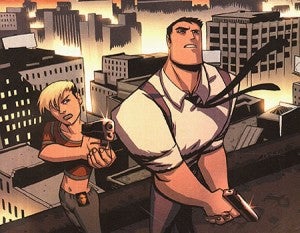 News spread quickly through the comics blogosphere yesterday after The Hollywood Reporter announced that FX has passed on the Powers pilot starring Jason Patric. While the project is not completely dead yet, virtually every news source has used a quote from Brian Michael Bendis, who created the comic and is a consultant on the TV show, that being "still in limbo is not the end of the world."

While he's right, "in limbo" is one of the circles of Hollywood development hell that you really don't want to be in. Notable comic book-related projects currently in development limbo include X-Men Origins: Deadpool and Green Arrow: Supermax, both of which are nominally still happening but neither of which has most fans or press really convinced that it will ever exist. Sin City 2 is only marginally closer to a reality, since Robert Rodriguez has identified 2012 as the year to do it.

FX President and General Manager John Landgraf identified problems with the pilot as filmed that led the network to send it back for substantial rewrites on the script which may ultimately result in reshooting the pilot. The reshoots may or may not happen, depending on how happy FX is with the rewritten script. That decision is likely to come in the next couple of months, according to The Hollywood Reporter.

"We didn't pick the pilot of Powers up; we went back and Chick Eglee, who had written it, did a fairly substantial rewrite that would require pretty extensive reshoots of the pilot," Landgraf told The Hollywood Reporter. "Right now we're in the process of deciding whether to pull the trigger on the reshoot."

Landgraf said he's a fan of the source material but that the adaptation has been very difficult to manage. He cited Game of Thrones as an example of how this kind of thing can be done well, but told The Hollywood Reporter that Powers is the most challenging adaptation he's ever been involved with.

Aching from Powers going back to the drawing board, and waiting for a good crime procedural with a twist? TNT recently picked up Ousted, a new "hard-boiled cop" series based on John Buntin's book L.A. Noir from producer Frank Darabont, former showrunner of The Walking Dead.