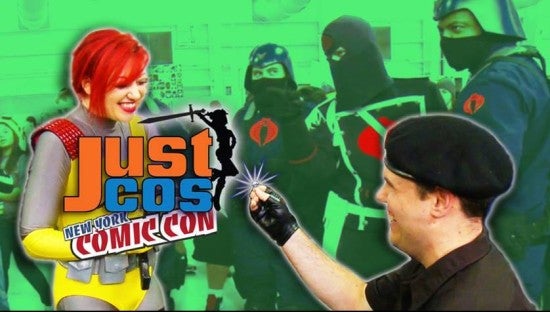 Nerdist's Just Cos is a cosplay webseries, usually dedicated to the kind of content you would expect to see on such a series.

At New York Comic Con, though, Unemployed Skeletor and Lava-Roid creator Kevin Conn connected with the show to bring a Very Special Episode, which just aired on their site, to life.

On the episode, Conn proposes to his girlfriend--and uses the not-insignificant pull that Nerdist has at the convention to bring in a little backup.

Flanked by a small army of Cobra Troopers, Kevin brought Scarlett's real-life father into the convention hall to be on hand to witness the event. It's a fun, sweet move that created an epic proposal video--and since Conn has a history of entertaining the geek community already, it seemed like something worth sharing on a family holiday...

G.I. Joe Cosplay Proposal on Nerdist's Just Cos Is Awesome