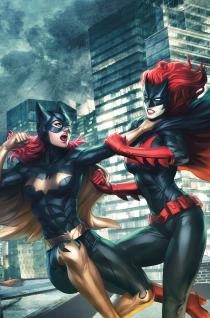 About a week ago, Comicbook.com reported on the rumors that writer Gail Simone was leaving Batgirl. However, Simone denied the rumors via Tumblr, stating, "I have not left Batgirl." Well, Gail Simone has still not left Batgirl, but it appears that Batgirl has left her. Earlier today, Simone tweeted, "On Wednesday of last week, new Batgirl editor Brian Cunningham informed me by email that I was no longer the writer of Batgirl." As far as the reason she is no longer on Batgirl, Simone tweeted, "It is baffling and sad, I will probably have a statement later today or maybe tomorrow. " Simone also added, "But I want to give huge, huge thanks to the other creators in the bat-offices, and editors Bobbie Chase and @yourpallsmitty, champions all. " Simone also expressed gratitude to the fans, tweeting, "And the biggest thank you of all to you guys for supporting this book so hugely and making it a commercial and critical success. "