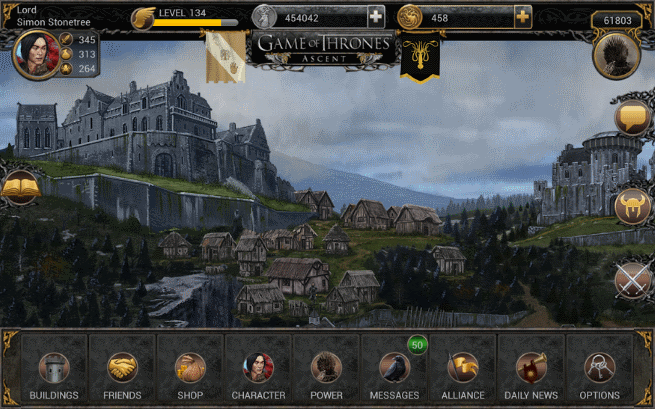 Game of Thrones: Ascent, the social game based on HBO’s Game of Thrones television series, is now available for Android phones and tablets, and iPhone.

In Game of Thrones Ascent, players play nobles in Westeros, working with or against each other in a persistent game world. They can take part in thousands of story-driven quests, delving into the lore and developing their own lands and reputation among the Great Houses. Players can explore an expansive world filled with deep political and social play involving diplomatic agreements, pacts, marriages, and betrothals. Through Alliance challenges, players work with hundreds of others to accomplish tasks and rise to the top of the Power Rankings.

“While we have more than 4 million players across the existing web and iPad versions of Game of Thrones Ascent, we know there are still many people who prefer to play games on their iPhone or Android phones and tablets,” said Jon Radoff, CEO and Founder of Disruptor Beam. “We’re thrilled to now extend the game to an even wider audience!  We’ve re-designed the user interface so that players can now enjoy the same great gameplay that they’ve seen online, but on these new devices.”

“Even though Season 4 is over, the backstabbing and betrothals do not need to end!” said Rich Gallup, Executive Producer for Game of Thrones Ascent. “As the long wait for Season 5 begins, you can play through Seasons 1 through 4 in Game of Thrones Ascent. In fact, tens of thousands of people have already followed Daenerys to Yunkai and given counsel at Tyrion’s Trial -- and that is just the beginning! We’ll be adding tons of exciting new content in the coming months including thousands of original quests, new items, updated features and more.”

Disruptor Beam updates Game of Thrones Ascent on a weekly basis, which will continue throughout 2014 and will include: