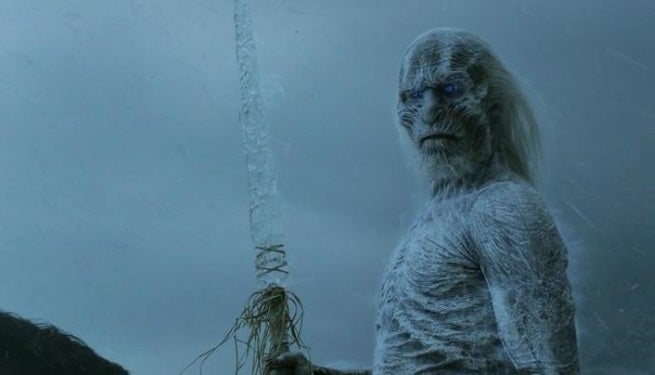 Last week, New York Magazine ran an interview with Game of Thrones costume designer Michele Clapton, in which she discussed the work she’s doing for the show’s upcoming fifth season.

HitFix thinks they may have picked up on an important bit of information that most other websites missed. Here’s the quote they pulled from the article:

And while the White Walkers have an armor of sorts, Clapton told us that it’s all found materials, “part of sculptures and architectures that they reused as armor,” nothing they made themselves. “The idea was that they maybe discovered an ancient society that was actually very sophisticated, but the leather bits were all kind of eaten away. That wouldn’t have survived.

What make this bit of information interesting is that it might be references the mysterious “third race” that many have hypothesized existed during the time before the First Men came to Westeros. This race, if it existed, had vanished from Westeros, and history, before the First Men ever set foot on the continent, but they, theoretically, left something behind. Certain landmarks and artifacts of Westeros were already there when the First Men arrived and how they were built remains a mystery. These include the castle at Pyke, the Seastone Chair, and the foundation of Hightower.

What Clapton’s statement may be suggesting is that the White Walkers have discovered ruins of an old civilization in the Lands of Always Winter, and they may or may not be from the same civilization as those found in the South.

It’s important to note that Clapton says “maybe,” which is important. There’s a difference between art direction, and the facts of a narrative, and I think it’s unclear here whether Clapton’s statement means that she definitely knows that the White Walkers discovered the ruins of an old civilization, or if that’s just the feel she wants to give them in their costume design.

It’s also important to note that, as made very clear in Season 4, Game of Thrones is more than willing to take liberties with its source material. We’re using evidence from A Song of Ice and Fire to make theories about Game of Thrones, and vice versa, and in some ways, that may be like mixing the pieces of two different puzzles together.

HitFix goes on to theorize that the White Walkers may actually be the remnants of the lost civilization. The article admits that the theory requires a bit of a leap, but I just don’t know that we have a lot to go on to back that up. Yes, the White Walkers – or whatever curse might afflict them - may have been created in whatever cataclysm caused Pyke to sink, but to actually be another race altogether doesn’t seem to work very well with that idea. It seems especially off when you consider that they take human children and turn them into new White Walkers, as seen in Season 4, which wouldn’t have been possible if they existed on Westeros before the First Men ever arrived.

Anyway, that’s a lot of conjecture and guessing for one off-handed remake by a (very talented) costume designer. Make what you will of it.

Game Of Thrones: New Details About The White Walkers' Origins?