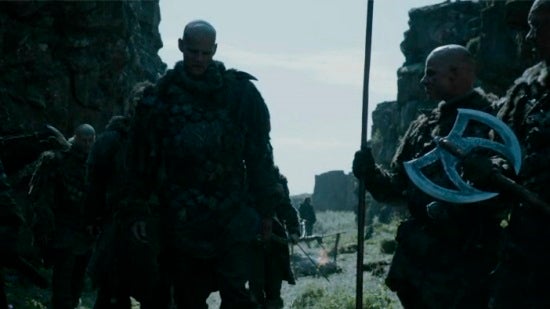 In the season 4 premiere of Game of Thrones, we were introduced to a terrifying clan of Wildings known as the Thenn. If you're wondering who they are, we’ve got you covered. We’ll only be discussing a general, cultural history of the Thenn, according to George R.R. Martin’s books, and not talking about specific, upcoming events, but just to be safe, consider this your spoiler warning.

The Thenn are a Wildling tribe, now part of Mance Rayder’s massive Wilding army. They hail from the Thenn Valley in the far north, within the Frostfang Mountains. Despite its location, the valley is actually much warmer and more fertile than most of the land beyond the wall.

The Thenn consider themselves to be the last of the First Men, the race of humans who inhabited Westeros before the Andals. As such, the Thenn typically do not speak the common tongue of Westeros, instead speaking only the Old Tongue. The Thenn are actually more civilized than most of the Free Folk, by the standards of the Seven Kingdoms. They have lords and laws and a leader who goes by the title of Magnar.

Another difference between the Thenn and the other Wildings is that they know how to work metal into weapons, forging arms and armor out of bronze.

The Thenn are not shown to be cannibals in Martin’s books, but it is heavily hinted that they are in “Two Swords.” This may be a trait borrowed from the Skagos tribe of Wildlings, another group that consider themselves to be descendants of the First Men and are said to be cannibalistic tribes.

Game of Thrones Season 4 Premiere: Who Are The Thenn?