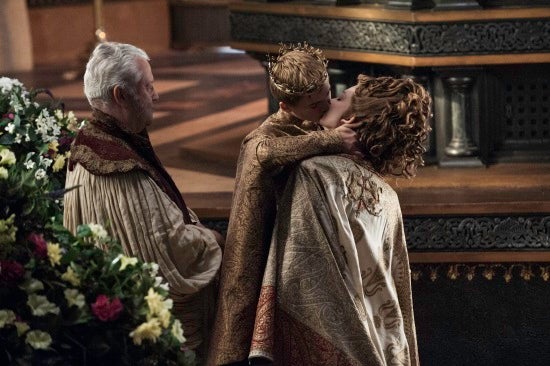 Tonight, Game of Thrones returns for the second episode of its fourth season, “The Lion and the Rose.” With the showrunners taking more and more liberties with the timeline and sequence of events from the book, it’s hard for even those of us who have read the books to nail down what to expect from episode to episode (didn’t see that battle at the inn happening last episode, that’s for sure). Even so, we’re going to give our best bets for what to expect in this week’s episode. Obviously, spoilers for the episode follow and possibly for future episodes if our timing is off. You’ve been warned.

Let’s start with the official synopsis for “The Lion and the Rose.”

Tyrion lends Jaime a hand. Joffrey and Margaery host a breakfast. At Dragonstone, Stannis loses patience with Davos. Ramsay finds a purpose for his pet. North of the Wall, Bran sees where they must go.

The Most Dangerous Game

In the most recent preview for “The Lion and the Rose,” we see Ramsay Snow out in the woods with a bow and arrow. We can’t be sure, but this seems to be a scene taken right from the books. In it, a former lover of Theon’s comes and rescues him from the Dreadfort, but it turns out to be a trick. Ramsay gives the pair a day’s head start before hunting them down with his hounds. It’s one of the cruelest of Ramsay’s many cruel tortures and fits right into the timeline of the show at this point.

Davos Is Sent Away.

The official synopsis for “The Lion and the Rose” says that Stannis will be losing his patience with Davos. In the books, after setting Stannis on a northward path, Davos is sent to treat with Lord Wymen Manderly at White Harbor on Stannis’ behalf. Stannis’ irritation may be the thing that finally triggers Stannis sending Davos on this mission, separating their individual storylines for a while.

If you’ve been waiting for the fantasy elements of Game of Thrones to start taking center stage, it looks like they’re about to. In the preview for “The Lion and the Rose,” we see Bran reaching out to a mysterious looking tree. This is a bit different from a scene in the books, but similar enough that we believe it is at least leading into Bran’s learning more about his Warg powers. In the books, Bran meets a Child of the Forest in a cave. The child introduces Bran to others who have become one with the forest, able to see through the eyes of the trees in the Godswoods of Westeros.

Coldhands, or no Coldhands?

In the books, once Bran gets through the Wall, he is guided by a mysterious being whom he calls Coldhands. The name comes from the aura of cold radiating form the creature’s body, similar to that of a white walker. Unlike other white walkers, Coldhands has some intelligence, covers himself in clothing including a hood that hides his face, and rides an elk. It’s possible that Coldhands has been cut out of the show completely, but if he’s going to show up it should be in this episode.

Weddings are dangerous business in Westeros, if you didn’t figure that out already after last season’s Red Wedding. This season’s Purple Wedding will see young King Joffrey poisoned to death. This event will set the stage for all of the storylines in King’s Landing this season. Soak it in, we know you’ve been looking forward to this for a while.

Games Of Thrones: Five Huge Possible Spoilers For The Lion And The Rose