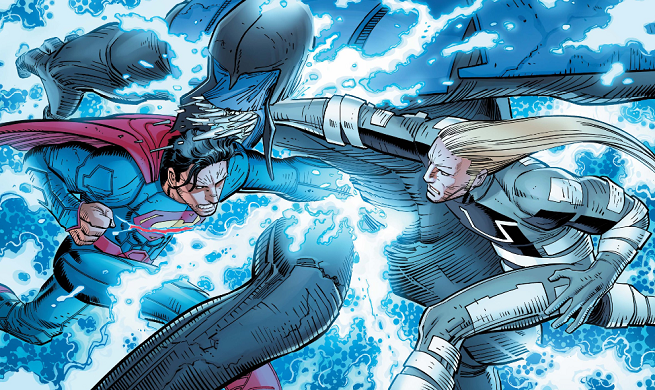 DC Entertainment Chief Creative Officer Geoff Johns teamed with Marvel Comics legend John Romita, Jr. this week to launch a new era of Superman, kicking off with a story that sees that Man of Steel come face to face with Ulysses, a hero who seems very much like an alternate take on Superman, complete with a nearly-identical origin story...except that the planet he was being evacuated from was Earth (it was just a facility his family was trapped inside of, not the whole planet, that was exploding).

Ulysses, seen above with the blond hair, was introduced as Superman was fighting a losing battle with a giant, monstrous being who tumbled out of a menacing space ship and immediately into conflict with the Man of Steel.

Briefly disoriented and not acquitting himself well in the fight, Superman welcomed the sudden assistance of Ulysses, who joined the hero in pummelling the monster into unconsciousness before revealing to Superman what the readers already knew: that he has been trapped in another dimension after being rocketed away from Earth.

If there's something...off...about Ulysses, it's bound to only get worse. The story arc is called "The Men of Tomorrow" and Superman #33, due out in July, is called "The New Superman." It all feels a bit like those Silver Age stories when Superman would develop a complex because some hero of the week would come in and replace him. In the '90s, they did something similar with a time-displaced Earthman who called himself the Alpha Centurion.

Introduced during the Zero Hour event, there was much more to that character (pictured at right) than meets the eye, though, and even though he wasn't a villain, his mythology defined him and he and Superman never really got past being pretty competitive.

Certainly that seems to be where they're going with Ulysses, but we have to wonder if it's something even more extreme than that. 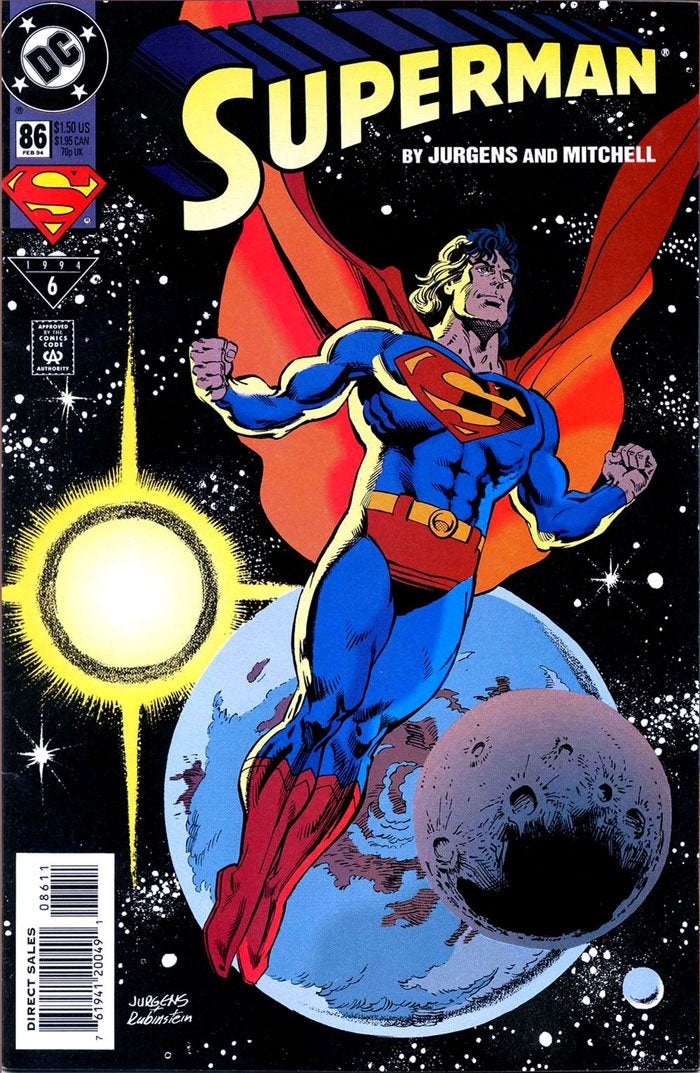 In 1994, Dan Jurgens wrote and drew an issue of Superman that saw the titular hero cross paths with Rik Sunn, leader of the Sun-Devils, in what appears to be one of his only in-continuity DC Universe appearances. While images of the Sun Devils appeared disembodied in the timestream during Mark Waid and George Perez's The Brave and the Bold run, Superman #86 was the only time the group -- who existed in a 12-issue, "Baxter Format" miniseries in the early '80s that represented Jurgens's first writing work -- appeared on page with DC heroes.

Undeniably influenced by the success of Star Wars, Sun Devils was created by Gerry Conway and Dan Jurgens. It told the story of Rik Sunn, a native of the planet Wolfholme, who had been a conscientious objector in Earth's conflict against a dictatorial, intergalactic regime called the Sauroids until, while en route to Earth as a diplomat, his homeworld was destroyed. Sunn and a hand-picked, ragtag group of rebels set out to take down the empire and its leader, the half-Sauroid, half-human hybrid Karvus Khun. At the end of the 12 issues, the empire was in shambles and its key weapon (think the Death Star) had been destroyed, but Khun had escaped in a formidable ship and was on the run from justice.

Since the book was not a huge sales success, the implied follow-up never came to pass and that was the last word on the Sun-Devils...until Jurgens crossed them into the post-Crisis DC Universe in Superman #86.

In that story, Superman finds himself stranded in space when a pair of spacecraft rumble out of hyperspace. One of them is clearly damaged, with the other in pursuit and firing. Superman, caught in the middle, smacks around the pursuing craft a bit until they keep their distance and then boards the ship being attacked to get answers.

On board, he finds a humanoid figure, eminently reasonable and wearing civilian clothes; he says that his elderly relative on board the ship is being pursued by mad pirates who want the vast wealth he has on board. After a display of the wealth, Superman is convinced and heads back to turn the pirates away. After he's caught in a transport beam and is being beamed back and forth between a point inside and outside of the ship too fast to react, though, he discovers that the "pirates" are in fact freedom fighters -- Rik Sunn and the daughter of one of the Sun-Devils. Rik is old and clearly obsessed with his mission of justice-slash-revenge, and while he's the good guy, he's also dangerously unstable, which explains why he attacked someone who suddenly turned up in the middle of the fight. 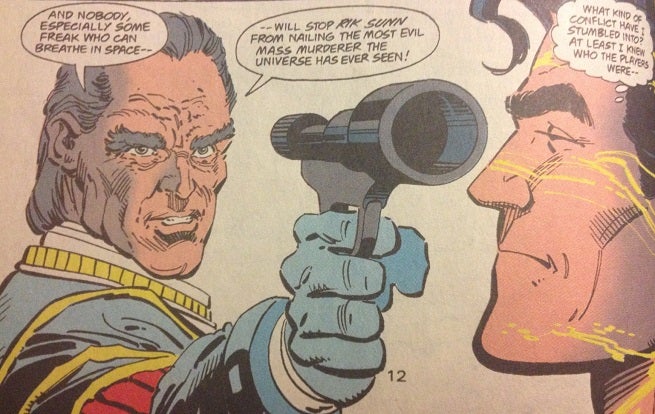 That brings us back to Ulysses and the monster from Superman #32, of course.

Of course, if he were being relentlessly stalked and hunted by Ulysses, crash-landing into a city full of humans and finding that the first "human" he encountered was an incredibly powerful being set on punching him...well, that could set a fella on edge.

Add all of this conjecture to the fact that we've got a dimension-hopping Ulysses, who might then have gained his powers via a trip to a higher dimensional plane -- like Mxyzptlk's Fifth Dimension or even Earth Prime -- and you've got the recipe for a pretty standard-issue Superman villain in the making...