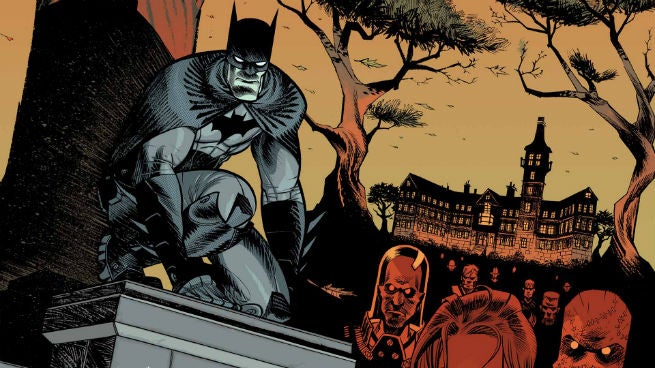 Ever since he guest-wrote Batman #34, Gerry Duggan's Arkham Manor has been on the minds of comic fans. We talked with him about it in-depth at New York Comic Con this weekend, a follow-up to a conversation we had back when Batman first encountered The Meek.

Here's that first part of the conversation, with more to come as the release nears on October 22.

How much inspiration does this series draw from something like Gotham Central, in terms of taking a group of people who aren't Batman and looking at the world through that context? It feels less like a spinoff and more like a companion piece.

Gotham Central is a great example of the space that we're trying to occupy. It's a chance for us not just to make new characters, but hopefully present older ones in a new light. 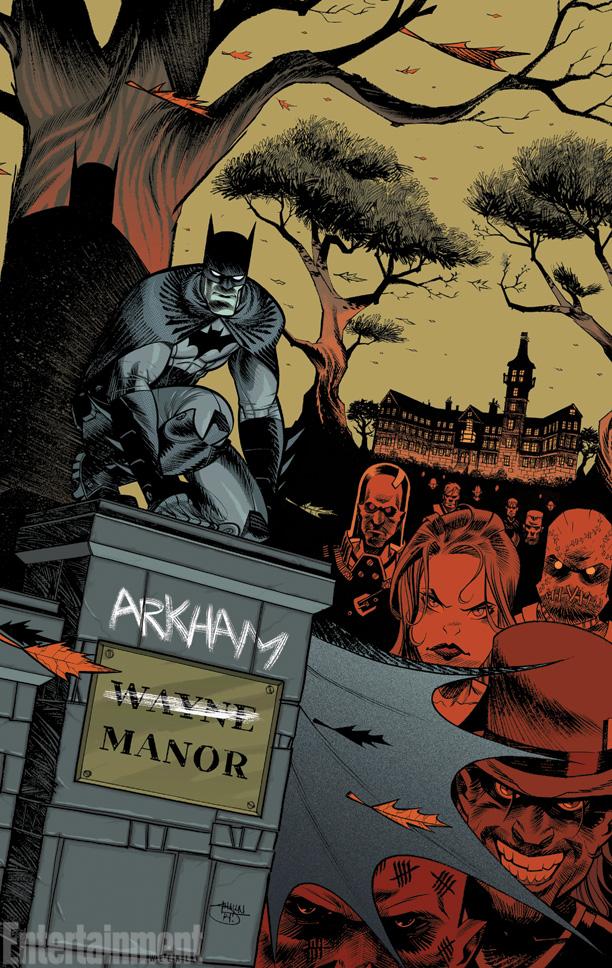 There are some great visuals to be had with Wayne Manor (even if nobody ever goes downstairs). Has looking at the art coming back been as fun and unpredictable as it sounds?

Yes, Shawn Crystal and Dave McCaig have been wonderful together. They're our Sonny & Cher. I don't know which is which - but the art is phenomenal. Once again, I'm lucky in collaborators. These comics will be worth the cover price for the art alone.

Obviously you've said that you want to be sensitive in your treatment of mental illness but part and parcel of Arkham is having dangerous, violent psychopaths and sociopaths in the cast. How do you balance that?

The mentally ill are the last to know they're mentally ill. If you stay true to that, and you're honest about characters reacting to the mentally ill - I think we'll be okay. Issue 2 opens with a bit of a heartache that I think is a very real moment faced by people everyday.

You've said this is "another long emergency" in Gotham, presumably akin to things like No Man's Land. Do you have an endgame? I mean...Batman's gotta have his house back one day, right?

Yes, I have a roadmap for the series, it just depends on when I make the turns. There are a few ways I could get to the destination we have in mind.

That said, what are the odds that the emergency itself was...managed?

Gotham feels more real every day. People in Detroit were out in the streets to keep the water on.

Arkham has a bit of a reputation as being somewhat...poorly run. It strikes me that Bruce Wayne would have a difficult time with that. Will that be a source of tension?

Without spoiling anything, can you tell us who the series leads will be? I know you've been reluctant to talk much about the story.

The actual physical structure is a character, I think. Mr. Freeze has been fun to write, Batman is always a hoot, and even the Arkham staff - like Dr. Jeremiah Arkham, and we have some fun new Orderlies -- people living and breathing - but sometimes they're just off-panel.

Arkham Manor is a good time to stay with them, when maybe we would have been off somewhere else. We're also introducing new characters that I hope will be as compelling as the characters that you already know. History is repeating itself in this book. The mental institution was originally in a converted mansion. It didn't go very well for the owner...

You know, there was this Dan Slott guy who wrote an Arkham story a while back, and the increased visibility worked out pretty well for him. You planning on embarking on a 150-issue run?

Arkham is kind of the Yankee Stadium of Gotham -- the big stage. So many great books have Arkham as a setting. I think we have a nice nod back to Arkham Asylum: Serious House On Serious Earth. Slott's Arkham book is a lot of fun.

Regarding long runs: A one hundred and fifty issue run seems almost impossible to achieve these days. I'm scripting into the 40s on Deadpool, and we're one of the highest numbered series. My inclination is always to do the "Costanza" and go out a high-note. There are so few great long runs anymore -- for lots of reasons both good and bad. Scott and Greg's will go down as a seminal work. Comic runs become possessive. "Simonson's Thor" "Moore's Swamp Thing" This is "Snyder & Capullo's Batman."

It seems to me that a series like this could have a lot of fun with an unreliable (or at least unstable) narrator -- a concept not entirely unfamiliar to people who read your work. Is that something we might see, or are you playing the voice somewhat more straight?

We establish a murder mystery in the first issue, and then some of Arkham's aforementioned lapses begin to show up, and the story is complicated. There are times you'll have a rock-solid voice you can depend on...other times...not so much.