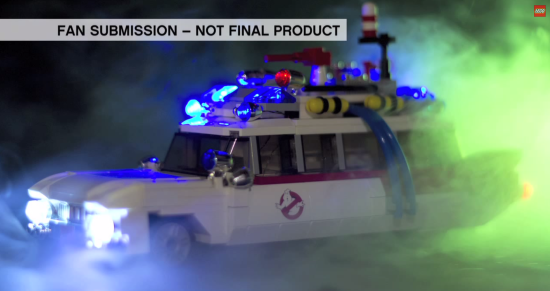 Lego has announced that a new Lego set for Ecto-1, complete with Ghostbusters minifigures, has gone into production. Pieces were part of a Ghostbusters 30th Anniversary project that was accepted during the latest round of Lego Cuuso judging. Lego Cuuso allows Lego fans to submit their homemade Lego projects for consideration by the Lego Cuuso judges, with projects that pass being put into mass production. The judges consider any project that obtains 10,000 supporters on their website during a given submission period. Ghostbusters 30th Anniversary was the only project accepted out of a group of seven considered, including a set based on the video game FTL, another based on the Wizard of Oz, and even another Ghostbusters set. Another of the sets, one of female minifigures, is still being considered for production. Another round of Cuuso judging has already begun, with the judges consider six projects, five of which are based on popular licensed properties: Sherlock, Macross VF-1 Valkyrie, The Legend of Zelda, Adventure Time, and the Back to the Future DeLorean. No details yet on the final design, pricing, or release, but they expect the Lego Ecto-1 to arrive later in 2014.