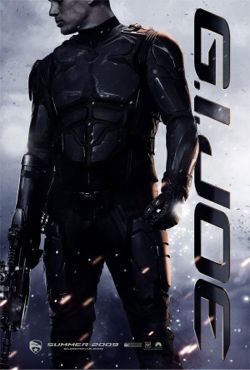 Paramount has got movie critics at major newspapers and magazines across the nation all in a tizzy by refusing to give them an advanced screening of G.I. Joe: The Rise Of Cobra. It happens to be one of those movies that critics are anticipating as being so dreadfully awful that they are anxious to stake their claim at being the first to coin various bad movie headlines based on the title of the movie. Critics can’t wait to utilize such headlines as “G.I. No!” and “G.I. Don’t Go!” Recent ads have had some already labeling G.I. Joe as the worst movie of all time. However, the few early reviews that have leaked out mainly from Internet sites have been surprisingly positive. Could it be that G.I. Joe is actually a good movie? Or has the bar been set so low that moviegoers can’t help but find the movie exceeding their expectations? Odds are G.I. Joe: The Rise Of Cobra is one of those action-packed Summer popcorn movies that won’t wind up inspiring deep thought but will wind up entertaining. Paramount probably realizes that highbrow movie critics will probably trash the movie, which might discourage some in the general public from going to see the movie. However, Paramount’s fears are likely overblown, as Transformers: Revenge of the Fallen and X-Men Origins: Wolverine both showed that the public will turn out for a highly anticipated action regardless of what critics say. Still, it could be a good strategy for Paramount to let middle America see the movie and form their own opinion before the reviews hit. G.I. Joe’s success won’t be based on winning awards or what the critics say. It will be judged on how well it appeals to its target fans and how much it racks up at the box office. With the Summer box office winding down, we don’t predict it will rake in as much as the second Transformers movie, but it should still win the weekend and likely please Paramount with it’s take.

G.I. Joe Is A No Show For Critics