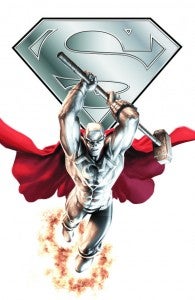 When DC's New 52 relaunch initiative was announced, a number of fan-favorite characters (like Booster Gold and Steel, for starters) lost their ongoing, monthly titles in favor of becoming players in a larger tableau. Booster Gold now leads the Justice League International, in a comic written by the character's creator, Dan Jurgens. Steel has moved from headlining in his own low-selling book to acting as a supporting cast member in Action Comics, the publisher's flagship title, written by one of the most respected writers in the industry. While neither of their books were bad before the relaunch, both were underperforming a bit. So--which is better? Would you prefer that your favorite character be the star in an ongoing, solo title that maybe you don't love or have a smaller part in a better book? It's an interesting question because not only does it pose its own inherent challenge but it butts up against one of the great conflicts in serialized comics storytelling--readers who continue to buy books they don't like because they're committed to the characters or out of an urge for "completism." Whether completism will continue to be a long-term consideration in this age of frequent reboots and relaunches remains to be seen, but it's something that's been discussed for years as something of a scourge of the comics reader. A quick survey done on the Facebook message boards of both our site and Raging Bullets, a popular DC Comics podcast, showed a pretty even split on the question. The question posed was this: Would you rather your favorite character have an ongoing monthly book you're not thrilled with, just to keep them prominent, or be folded into a team book or another character's monthly where they're handled a bit better but aren't the "star"? The replies varied, but there were three basic positions, and three responses that perfectly articulated them. "Give me the solo book if I have to choose," said fan Steve Zinodas. "There is always the hope that a good writer will come on. Even if they don't, the current writer might craft a storyline I enjoy. Even a blind squirrel finds a nut now and then." Meanwhile, Project Superman colorist Art Lyon advocated for the opposite, saying, "I guess I'd prefer to see them handled well but not be the star - that way maybe they can generate some interest and get their own GOOD book!" Last, but not least, former Newsarama contributor Kevin Huxford chimed in, saying, "I don't know my honest answer. My logical one is the team one, but I don't know that my heart wouldn't cling to the ongoing where I hope they eventually get it right." Where do you fall?

Good Without A Bad Book?