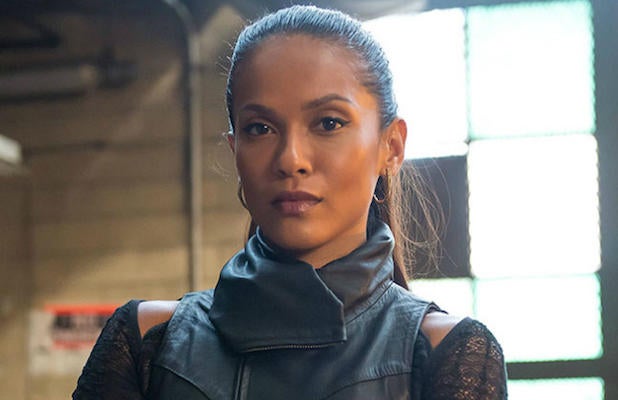 The Wrap has the first look at Larissa Diaz as Copperhead in Gotham.

In the DC Comics universe, Copperhead is a male assassin known for suffocating his victims with his suit's tail. The Wrap's article makes a big deal of the Gotham version's gender swap, but the character appeared as a female in last year's Batman: Arkham Origins video game, so it's not unprecedented.

The bigger difference is that she seems to be sticking to a more tried and true method of killing people: a gun. Perhaps this is simply because, as Gotham is a prequel series, we're seeing Copperhead in her early days. It's worth noting, however, that Arkham Origins' Copperhead also lacked a tail, but still suffocated her enemies using complex grapples.

Copperhead will debut in the Gotham fall finale, "Lovecraft," airing Monday on Fox. Check out the gallery below for more images.