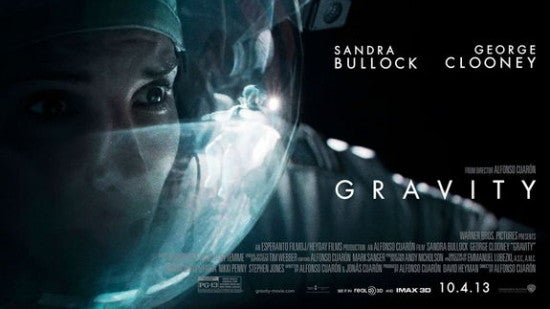 Warner Bros. has just announced that they are re-releasing Gravity in movie theaters. The film will be re-released on more than 900 screens on January 17, 2014, according to Dan Fellman, President, Domestic Distribution, Warner Bros. Pictures. Originally released on October 4, 2013, Gravity was a huge hit with both critics and audiences. Gravity director Alfonso Cuarón won a Golden Globe Award for Best Director on Sunday. The film has also received 11 BAFTA Award nominations and 10 Critics' Choice Award nominations, both including Best Picture, Best Director and Best Actress. It has also won Best Picture awards from several prestigious critics organizations, including the Los Angeles Film Critics Association, and has been included on 395 critics' and critics groups' top ten lists, as well as being named one of the AFI's ten best films of the year. It was also announced as the year's best reviewed film by the website Rotten Tomatoes. In making the announcement, Fellman stated, "We are thrilled by the many accolades for 'Gravity,' which have generated renewed word-of-mouth and interest in seeing the film, whether for the first time or to experience it again. We wanted to give audiences everywhere another opportunity to see it the way it was meant to be seen—on the big screen." In Gravity, Dr. Ryan Stone (Bullock) is a brilliant medical engineer on her first shuttle mission, with veteran astronaut Matt Kowalski (Clooney) in command. But on a seemingly routine mission, disaster strikes. The shuttle is destroyed, leaving Stone and Kowalski completely alone—tethered to nothing but each other and spiraling out into the blackness. The deafening silence tells them they have lost any link to Earth…and any chance for rescue. As fear turns to panic, every gulp of air eats away at what little oxygen is left. But the only way home may be to go further out into the terrifying expanse of space.

Gravity Being Re-Released In Theaters On January 17