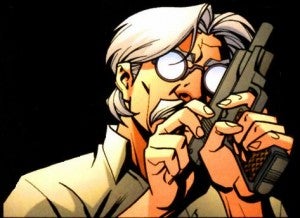 Recently, ComicBook.com ran a feature story that listed a handful of DC characters (mostly with strong Green Arrow ties, but some who were just DC utility infielders, so to speak) that we would like to see appear in the forthcoming Arrow TV series. Because many of them were lesser-known figures, there were a handful with whom you might not have been familiar, including Eddie Fyers, Oliver Queen's former muscle-and-guns-for-hire friend. In the comics, Eddie had a back story shrouded in mystery, and his relationship with Ollie was a roller-coaster, as Queen eventually died (briefly) and left his son essentially in the care of a man who had tried to kill him. The folks over at Green Arrow TV, though, brought up an interesting question when we ran the piece. They tweeted at me, "In-universe, do you know if the design for Eddie Fyers was based on Archie Goodwin at all?" 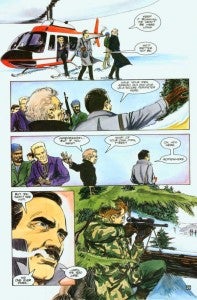 I'd never heard this particular rumor, nor had I ever considered the possibility. Frankly, prior to having written the article, I had assumed that Chuck Dixon had created the character for his run with Connor Hawke, the run that made me familiar with Fyers. When confronted with this question, I e-mailed both Dan Jurgens and Mike Grell, who had written and drawn the series both together and separately around the time of Fyers's first appearance (the character was created by Grell, although the last name was spelled "Fyres" at that point rather than the spelling that would later make more appearances). Grell replied back:

"BINGO! Archie Goodwin was, indeed, my model and inspiration for Eddie Fyres... with his permission, of course. Beneath that somewhat unassuming exterior was a natural athlete who loved to startle people by falling on his face. He'd go rigid, fall forward and catch himself in push-up position. He was surprised that I could do it, too, and it became our standard greeting. Beats a secret handshake."

That's perhaps not surprising to folks who knew Archie or Grell back then; tales of Grell's physical prowess had been shared with me in the past (although I admit to not having heard of Archie's similar athleticism). Will this character show up in The CW's Arrow? I feel like it could happen. After all, they've said they're going after a James Bond/Jason Bourne feel for this show, and Fyres/Fyers is arguably the best character of that type in the Green Arrow library. It's hard to say for sure whether he'll appear, of course, but if he does, the likelihood of him looking particularly like Archie Goodwin is probably not great. It has, however, inspired me to do a little digging to the rest of the people on our list and see whether they have similarly cool backstories. If they do, you'll see them here!

Green Arrow: Who Is Eddie Fyers?