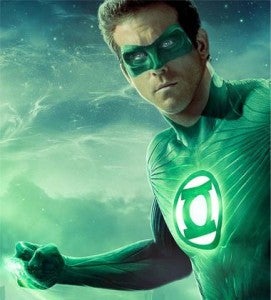 With the drubbing many critics have given the Green Lantern movie, most box office predictors were calling for one of the biggest comic book movie flops of all time. However, early indications are that moviegoers are proving fearless to bad reviews as far as Green Lantern is concerned.

After the reviews started hitting, many seemed to think even a $50 million opening weekend might be a stretch for Green Lantern. However, Green Lantern scored $3.35 million in midnight showings on Thursday night, which puts it on track with Thor that opened with $66 million. Early Friday forecasts are predicting in the $20 to $25 million range for opening day. Most box office predictors have now raised their outlook for opening weekend to be in the $60 to $65 million range.

Because Green Lantern also has the advantage of opening on Father’s Day weekend, where the Sunday box office could trend much stronger than most Sunday box offices, the possibility of a $70 million weekend is not out of the question.

While these latest box office predictions are far from record setting for a comic book movie, it does make one wonder what the results would be if the critics had been kinder. Could Green Lantern have been a $100 million opening weekend movie? It says a lot for the continued appeal of comic book movies that even the harshest critics can’t scare the audience away.

One Piece Deals Its First Blow to Kaido Out of Nowhere